Another Columbus Day as well as another Columbus Day Parade has come and gone.  Seems with every passing year Italian participation is dwindling. Yes you do see the obligatory schoolchildren filling the sidewalks of Fifth Avenue holding Italian flags and waving them excitingly with each passing float (seems the number of schoolchildren is not as visible as well) but it’s becoming harder and harder to find those groups from the good old days, the group of “old timers” or as we refer to as the “real” Italians which consisted of native, first and second generation Italians.  These groups would go as far as to venture out in charter buses from all the five boroughs to watch and participate in the Parade.

As a little girl growing up in the heart of Brooklyn I vividly remember how we were encouraged in celebrating Columbus Day in school.  We had what we called “Italian day” whereas each child was encouraged to bring an Italian specialty dish to school to celebrate Columbus Day and Italian culture in class.  This was usually done in grammar school and I remember each year becoming so excited as Columbus Day approached and having my mother make something special (usually Neapolitan) and sharing it in class with all my classmates. I asked my niece and nephews if they have this kind of a day at school and unfortunately the answer is no. This to me seems a shame all students should be encouraged to celebrate their heritage whether it be Italian or otherwise.

As children we were also encouraged by our teachers to go to the Columbus Day Parade and be a part of the Italian celebration. We were proud of our Italian culture and heritage and venturing out to the parade was not only meant for just us kids but it also included our parents, grandparents, aunts, uncles, cousins etc.  Columbus Day was a very special day for us it helped us to remember where we came from and who we were.  True  we were born in America but we were also Italian by blood.  In my neighborhood we would frequently use the saying “we have one foot in America and the other in Italy” (personally I think the metaphor of using the foot to describe our Italian American-ism had something to do with referring to Italy as the “boot” but you can make your own conclusions ).  This  metaphor was especially true for first-generation Italian Americans like myself whose parents came from Italy and whose children were born here. We had the best of both worlds but at the same time we sometimes were confused as to what world we belonged to.

As far as the Columbus Day Parade goes the fondest memories of the parade for me were always the colorful folkloric groups from the various regions and provinces of southern Italy usually from Campania to Calabria down to Sicily.  These musical groups were always dancing and singing proudly and enthusiastically to the classical favorites such as “o sole mio”, “funiculi funicula”, “ciuri ciuri” as well as so many other familiar songs we loved and grew up with.  I remember many years ago seeing the replicas of the Nina, the Pinta and the Santa Maria with Columbus himself leading the charge accompanying his queen for the day, Isabella in epoch costumes with the occasional authentic Sbandieratori (medieval flag throwers ) from Italy.  In more recent times it seems using a Christopher Columbus lookalike has become somewhat politically incorrect considering the controversy behind Columbus’s discovery of the Americas and the treatment of native Indians.

I have also noted that within the last few years there has been a noticeably smaller italian presence or better a far less concentration of Italians and more of an international flavor along the parade route. That is not to say it’s a bad thing just different.

There is a saying “you can never go back again ” and in this case regarding the Columbus Day Parade it’s true you can’t go back to the old days when you would walk up and down the parade route and practically everyone you passed was speaking Italian except for the occasional English speaker (actually the Italian we heard was in reality all the different southern Italian dialects).

I am still hopeful that they can experience the same pride and enthusiasm from the Columbus Day Parade just as I and a whole generation of kids did back in parades gone by. 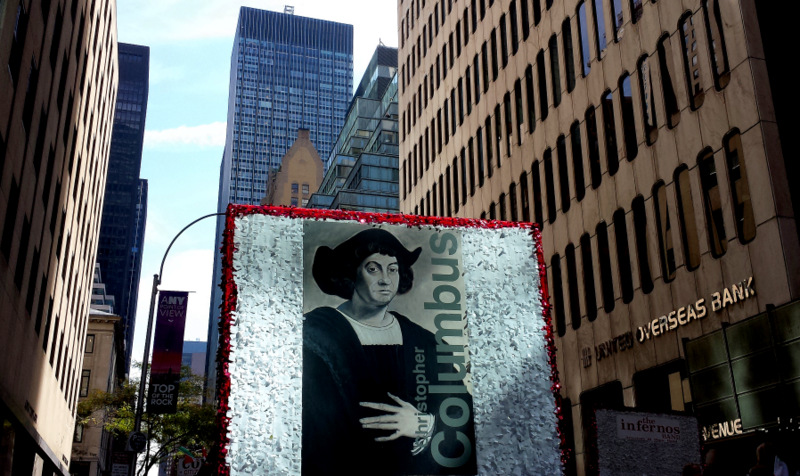 He had three ships and left from Spain;

He sailed through sunshine, wind and rain.

He used the stars to find his way.

A compass also helped him know

How to find the way to go.

Ninety sailors were on board;

Some men worked while others snored.

Then the workers went to sleep;

And others watched the ocean deep.

Day after day they looked for land;

They dreamed of trees and rocks and sand.

You never saw a happier crew!

His heart was filled with joyful pride.

But “India” the land was not;

It was the Bahamas, and it was hot.

The Arakawa natives were very nice;

They gave the sailors food and spice.

Columbus sailed on to find some gold

To bring back home, as he’d been told.

He made the trip again and again,

Trading gold to bring to Spain.

The first American?  No, not quite.

But Columbus was brave, and he was bright.