It feels as if The Museum of Modern Art has just revealed it’s best kept secret: Pablo Picasso, the father of Modern Art, and world-renowned painter, was also a revolutionary sculptor. Just when we thought he could no longer shock the art world, 42 years after his death, he brazenly, unapologetically, spectacularly does it again. This time, in three-dimensions.

Picasso Sculpture opened on September 14th and will be on view at The Museum of Modern Art through February 7th, 2016. The monumental show features approximately 140 of Picasso’s sculptures, 50 of which are on loan from the Musée national Picasso-Paris, 11 from MoMA’s permanent collection, and the rest from major public and private collections in the United States and abroad.

Why isn’t his sculptural work as well known as his paintings? First, he wasn’t trained as a sculptor. And second, he was personally attached to his sculptures. "He kept them in the rooms of his home and all the spaces of his studio," co-curator Ann Temkin explained at the press preview. "They were his stuff, while in his mind, the paintings were something he made to be shown and sold." 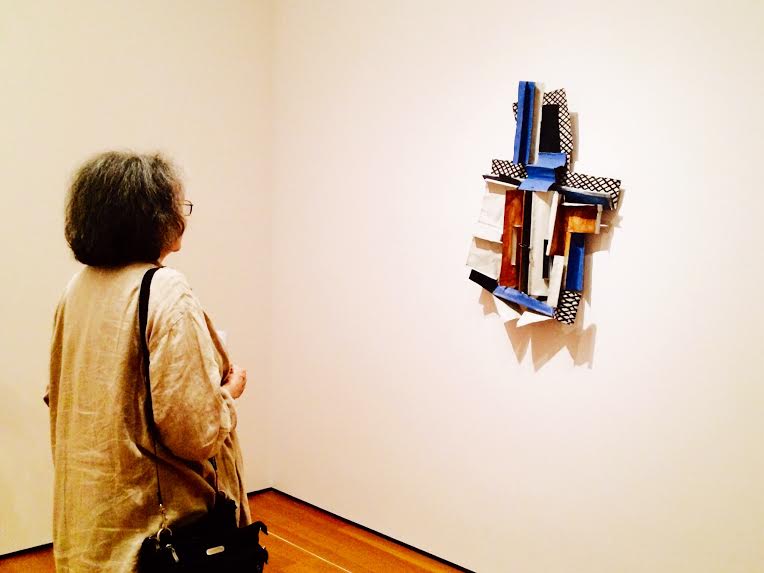 It’s an exhibition basically comprised of 10 smaller exhibitions. Each room reveals a set of works from a different phase of Picasso’s unpredictable sculptural career, in which the artist demonstrates a radically different approach, in terms of material and technique, from the one before. “Sometimes it’s hard to believe it’s the same artist. The phases are so distinct,” said Temkin.

It is organized chronologically, save for the dizzying transition from the first room to the second. The first gallery the museum visitor is ushered into features painted sheet metal work from the years between 1954 to 1964, Picasso’s final phase of sculpture making. It’s confusing that the show doesn’t start from the beginning, but it’s obvious that this room, beautifully illuminated by natural daylight, suits this set of sculptures, whose subject matter mirrors the lightness of the setting they are displayed in. Many of the pieces depict the profile of Picasso’s wife and muse, Jacqueline, while others portray bathers, mothers, a horse, a chair. We recognize these characters. It’s as if the subjects of his paintings have peeled themselves off his canvases to appear in three-dimensional forms. Through the contours of the metal planes, and his painting of the sheet metal, Picasso toyed with the depiction of multiple perspectives. The show culminates with the Picasso we know and love. 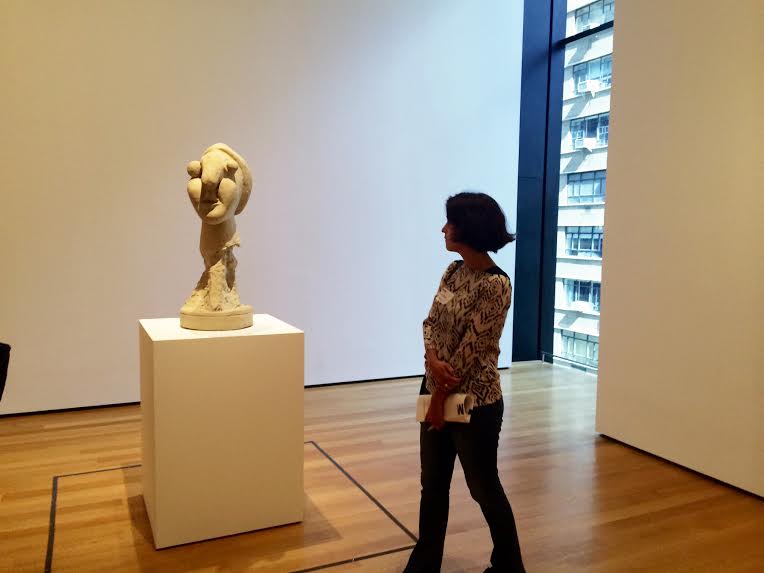 Now backtrack 60 years. As you move through the sliding glass doors into what is technically the “first” gallery of the show, you find yourself wondering if you somehow took a wrong turn, wandered into a different exhibition? You think to yourself, “It can’t be Picasso.” This space features the artist’s earliest works, produced between 1902 and 1909. Placed in a glass vitrine is Seated Woman (1902), the first sculpture he ever created. The miniature figure was modeled in clay in the studio of a sculptor in Barcelona when Picasso was only 20 years old. Then there is The Jester (1905) and Head of a Woman (1906). In their simplicity and trueness to human form, the pieces lack all of the usually audacious characteristics that normally define Picasso’s work. 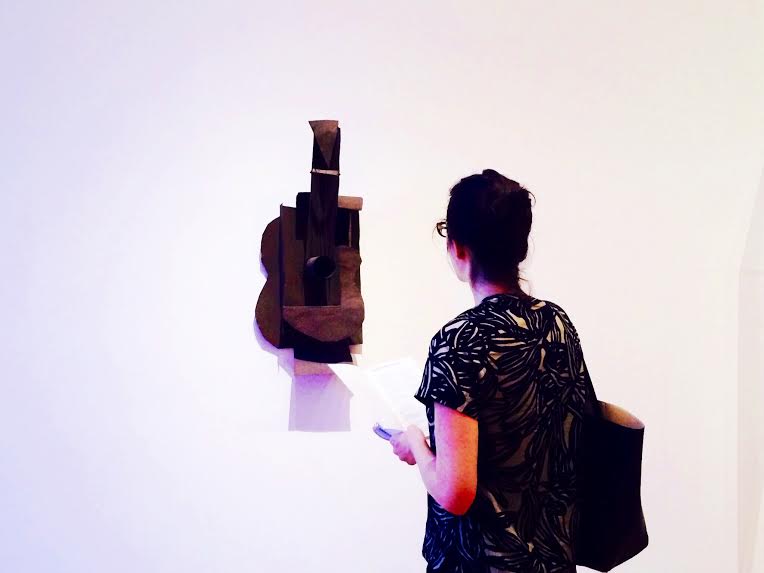 Meander into the next room and you will find that, after a 3-year pause, Picasso picks up sculpture again in 1912, this time with a different technique and an entirely new set of materials: cardboard, steel, bronze. The reduced forms, basic geometric parts, and monochromatic colors of these pieces mirror the imagery found in Picasso’s cubism paintings from this same period. The highlights of this room include his cardboard (and in 1914, steel) Guitar (1912), in which Picasso boldly breaks from the traditional standards of sculpture and introduces negative space into solid forms. Not knowing how to solder the haphazardly cut pieces of the sculpture together, the resourceful, untrained sculptor linked them using thread, creating a work that, according to MoMA’s Sculpture Conservator, Lynda Dickerman, uncomfortably shifts in your hands as you hold it.

Also on display here are all six versions of Picasso’s Glass of Absinthe (1914). “One hundred and one years later, this is the first time they have been together. It’s a miracle that they’re here,” marveled co-curator Anne Umland. While they are all cast in bronze, the uniquely painted surfaces fill each glass with an individual personality. One dons funky red polka dots, another is sprinkled with specks of blue. Picasso seemingly peeled away the outside of these quirky glasses, revealing the clear liquid inside, which appears as solid and opaque.

Just as what is liquid and what is solid is confused, in his next phase Picasso blurs what qualifies as a “sculpture.” In 1927 he was commissioned to create a monument for the tomb of the poet Guillaume Apollinaire, but Picasso’s radical interpretations were not what the memorial committee had in mind. The artist presented them with a revolutionary new form of sculpture that, well, wasn’t considered sculpture at all. Three of the rejected pieces, or contraptions, each titled Figure (1928), consist of intricate wire constructions. According to the press release, Picasso’s art dealer, Daniel-Henry Kahnweiler, best described them as “drawings in space.” Picasso’s final, and once again rejected, attempt at creating a memorial was Woman in the Garden (1929-30). Composed of recycled pieces of metal, welded together and painted white, the piece shares a greater resemblance with a crazed chicken than that of the distinguished poet whom the piece was meant to commemorate. 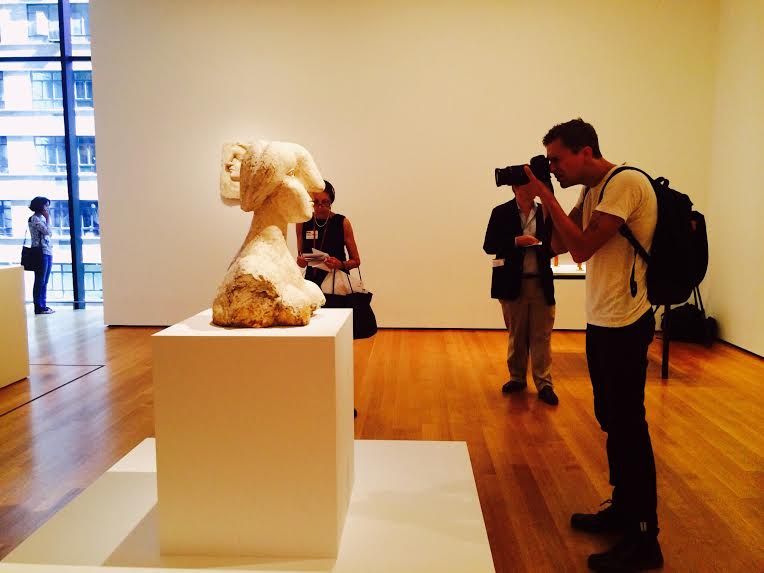 The next two rooms of the exhibition are dedicated to the works he created in the early 1930’s when Picasso finally sets up his own sculpture studio in the Chateau de Boisgeloup, located 45 miles outside of Paris (up until this point he had been using his friends’ studios.) There he discovered white plaster, a malleable material that suited the artist’s restless personality, allowing him to reshape the sculpture, walk away, start again. This is when it becomes particularly beneficial that all of the sculptures in the exhibition, save for those mounted on walls, are displayed in the center of the room, allowing the visitor ample space to view them in the round. As you circle around works such as Bust of a Woman (1931) or Head of a Woman (1931) you can feel Picasso playing with your visual senses: a tuft of hair effortlessly transforms into a nose, and then suddenly, a phallus.

The walls of the next room of the exhibition are painted a dark grey-green, an appropriate reflection of the solemn nature of the subject matter treated in Picasso’s sculptures from the wartime years. As is evidenced by his groundbreaking artworks, Picasso was not one to follow rules, and while he was living in Paris during the German occupation of WWII, he wasn’t about to start. Bronze casting was prohibited; metal was melted down and used only to make ammunition. Picasso defiantly transported his sculptures to a foundry in the middle of the night where he cast pieces such as Death’s Head (1941) and Man with a Lamb (1943). The latter depicts a man with a stoic stare, firmly grasping a fretting lamb. It is thought that the artist was making a spiritual statement about the persistence of hope. 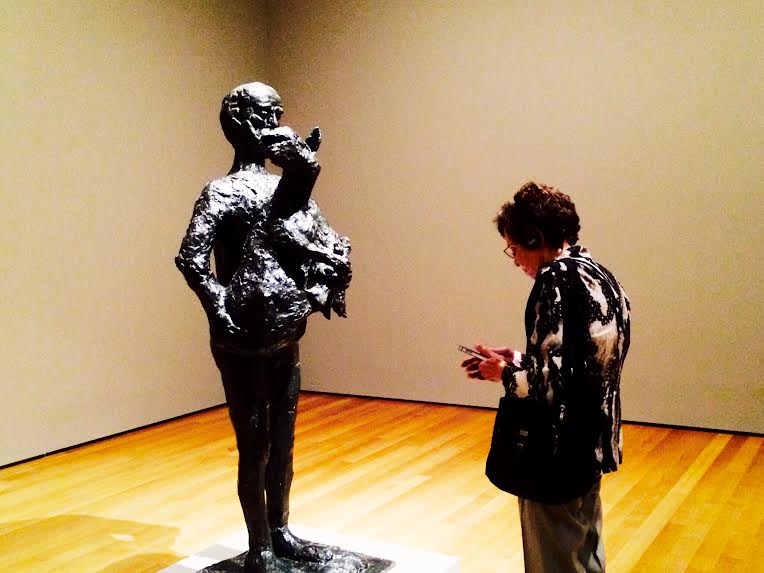 The subsequent room demonstrates that after the liberation of Paris, and the end of the war, Picasso’s sculptures once again exude a lighter feel. The artist traveled to the French Riviera where he was exposed to the pottery of ancient Greek and Roman culture. By 1946 he started creating a new form of sculpture that was widely used in ancient times, that of the ceramic vessel. He experimented with slips and glazes, and started working in “assemblage,” incorporating everyday objects, such as screws, watering cans, and spades into his creations. In the making of She-Goat (1950), for instance, Picasso used a wicker basket to form the rib cage, and udders from ceramic vessels.

While the next phase of Picasso’s work demonstrated a shift from the full-bodied forms of his ceramics to flatter, more frontal forms, assemblage continued to play a role in his sculptural creations. In 1955 the artist moved to Cannes where he hunted for pieces of old furniture, tree branches, and lumber scraps which he would incorporate in the only multi-figured sculptural ensemble of his career, Bathers (1956). In the exhibition they are arranged, standing on top of a carpet of pebbles, an element that the curators used to intentionally recall his love of the French Riviera. 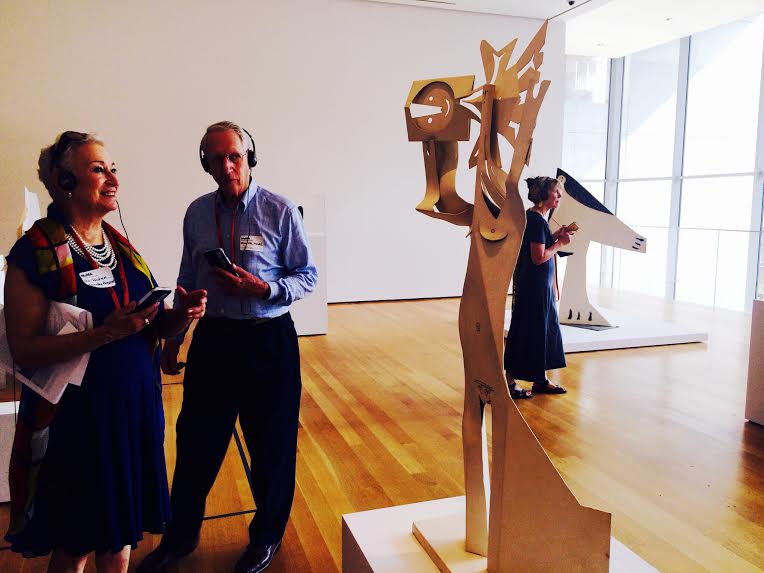 While the curators did an impressive job in wrestling with, and clearly defining the multiple phases that make up Picasso’s bewilderingly inconsistent sculptural career, there is one fault in the planning of the exhibition: the bold, but unproductive decision to exclude labels. Instead, visitors are given a booklet, in which are printed the names, and rather crude representations of the sculptures on display. It makes it difficult to keep track of things, and not to mention, creates opportunities for frequent collisions with other visitors as you walk from one sculpture to the next with your head in the booklet, trying to identify each piece. But Temkin explains that there is a method in the madness. “If you didn’t have booklets, you’d be going off to the wall finding the label for your work and would have to look away [from the work]. Our hope, in fact, was that it made it easier and more accessible for our visitors. You wouldn’t constantly be walking back and forth [from the sculpture to the wall].” If they see that it winds up hindering the visitor’s experience, “the labels can go up in a day,” she says.

Extensive, perhaps seemingly exhaustive, studies have been conducted on Picasso’s artwork, which redefined art in the Twentieth century. But what MoMA has made clear through this exhibition, is that there is always more treasure to unearth. The exhibition is so significant that the curators uncharacteristically removed the post-war collection so that Picasso Sculpture could comfortably sprawl across the entirety of the museum’s fourth floor. It isn’t the first time these pieces are on display, but it is the first major museum survey of Picasso’s sculptural work in 50 years. “I keep telling people to come see the show,” said Umland, “You’re not going to see these objects in this relationship again in our lifetime.”