Paintings of Light: A NYC Artist’s Ethereal Vision of the Concrete Jungle

Dressed in all black, her long skirt fluttering at her ankles, Marlene-Luce Tremblay had a mystical air about her as she graciously moved around her small studio apartment, a cozy haven snugly tucked away in Tudor City. Much like her artwork, the dark hues of her ensemble contrasted the vibrant bursts of color that peppered her surroundings. Table lamps filled the charming space with a warm, intimate glow. Hanging on the cream colored walls, and leaning against the wooden dresser were her canvases, painted in vivacious hues of red, gold, blue. One depicted a Western cityscape. Another, Spain’s Alhambra palace, and the mysterious guise of a Nepali woman.

We sipped on white wine as the soothing jazz sounds of Diana Krall’s album The Look of Love played softly in the background. Marlene sat comfortably on her plush bed; I sat on the couch across from her. She told me her story.

From exploring the Middle East and replanting her roots in New York, to enduring a painful divorce and surviving cancer, Marlene is a woman who has used her art to overcome hardships. As an artist who has exhibited her work in Montreal, Paris, London, New York, Tunis and Algiers, Marlene’s work not only crosses international boundaries, but through her art she also offers viewers and intensely transcendental vision of the world, one that borders on surreal. “When I go into my art, it’s like therapy. It gives me life,” she said.

Her story as a New York artist begins in 2009 when, as a result of her marriage ending, she moved from Montreal, Canada to New York City to work at the United Nations. By day, she works in the Office of the Spokesperson and prepares news reports for the Secretary-General, a good fit given her educational background in Political Science. By night, the painter and fine art photographer feeds her true passion: pintography.

It’s a process that is unique to her artistic oeuvre. It consists of photographing people, objects, and landscapes. Using her computer, the black and white photographs are tinted with pigments she visualizes and creates, and then enlarged and reproduced on canvas. The scans are striking, but the desired effect isn’t achieved until the canvas is painted over in acrylic or oil paint, a technique that accentuates the shades of the particular color she’s selected to realize her unique vision. “With the paint I bring out the color, it makes the composition come alive,” she explained.

Today, her lab is her computer and her studio the snug corner of her apartment where she likes to paint, but that hasn’t always been the case. While living in Montreal, Marlene worked as a full-time artist and only shot film photography. Relocating to New York City called for an adjustment in her artistic practices. Without the luxury of having her own lab to develop her prints, the artist was forced to put down her treasured 35mm film camera and reluctantly purchased a digital one. “I didn’t want to do digital photography, for me it was only film. But I had no choice,” she said. With her new camera in tow, she enrolled in a couple of classes on digital photography at the International Center of Photography. 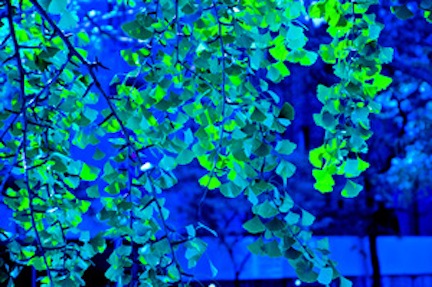 On the weekends, when she wasn’t working her 9:00 – 5:00 job preparing media reports for the Secretary-General, she would take walks around the city, and with her digital camera in hand she started to photograph her surroundings. “I found inspiration in the cityscape, the architecture mixed with the landscape. The trees, with little birds, blooming in the middle of a concrete city.”

Her fascination for New York’s green spaces is brilliantly captured in works such as Safari Green and Cobalt Blue Fern, Pink Flamingo on 42nd Street, and Sunny Gold on the Hudson. Though she dislikes color photography, the artist does not shy away from pigments. On the contrary, from cobalt blue, neon green and hot pink, to warm gold and crimson red, her dreamlike pintographs are ablaze with hypnotic explosions of color, juxtaposed by the dark shadows of the represented subject. “It’s all about the light and the shadows. I see a tree and I can already see how I am going to paint it. It’s something that rises from within me and overflows to the outside world,” she explained.

It’s fitting that she should be so drawn to the trees and flowers that blossom across the city despite their less than ideal urban habitat. Notwithstanding the toxic fumes emanating from taxi cabs, and the pollution that taints the air, flora thrive in the few, but treasured green spaces of this metropolis. Upon moving to Manhattan on her own, and being unexpectedly diagnosed with cancer in 2009, Marlene had to overcome her own warped circumstances in order to survive.

“When you go through something like that, it shocks you. The doctor tells you you have cancer and right away you think, ‘Ok, I’m going to die.’” There are a lot existential questions that came to mind as to what really matters in life.”

During this difficult time Marlene discovered comfort in the friendship of those who surrounded her, both in New York City and overseas. 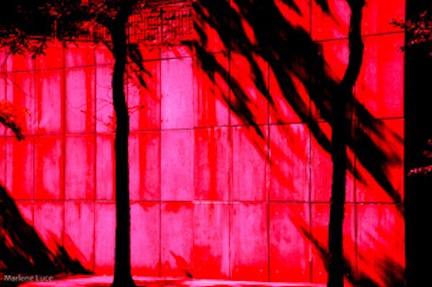 “I want to tell you about my friend Faye,” she said to me. Perhaps it’s true that a name reveals a person’s intrinsic nature. The name Faye derives from the Middle English faie meaning fairy and when you hear the story, you’ll understand why it suits her. “She lives in England. I told her the news and she asked if I had someone with me. I said no, I didn’t want anyone with me. I live in a very small place, and I was uncomfortable. A few days later Faye calls me and says, ‘I’m coming over.’ She flew from England to stay with me.” A sweet smile spread across Marlene’s face as she reminisced the gesture.

Faye’s visit to New York initiated a tradition among Marlene’s group of friends that they continue to honor today. Before she returned to England they planned a dinner and named it: ‘To Life and Friendship.’ Now, every two months Marlene and her friends relive that ritual. Everyone brings a different dish and together they celebrate those gifts.

“My experience has given me a greater appreciation for things. I feel closer to people. I see the beauty in nature,” she reflected. Her struggle with, and defeat of cancer manifests itself in the transcendental nature of her artwork, but while Manhattan’s multifaceted cityscape serves as Marlene’s muse, this city also nourishes another one of her fascinations: people and cultures. Rich, poor, American, European, Catholic, Muslim, Marlene finds inspiration in the people she meets everyday. “In New York people come from all walks of life. I can apply that diversity to my photography because it’s individual. I can paint the tree red, or blue, however I feel, and I love that.”

Then there is the Arabic aspect to her work that is impossible to ignore. One of the most resounding themes present in her oeuvre is an emphasis on multicultural exchange, specifically between the Western and the Arabic world. 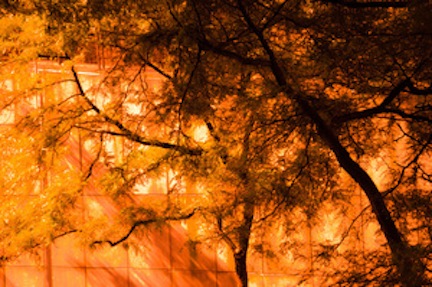 Marlene has extensively traveled the Middle East. She’s been to Syria and Jordan, and in 2004 she was invited to Egypt by the government to celebrate the 60th anniversary of the diplomatic relations between Canada and Egypt. The trip marked a defining turning point in Marlene’s artistic career. “When you travel somewhere and see something for the first time, that’s when something totally unusual comes out. When I took my trip to Egypt my creativity went wild,” she said. Up until that moment the artist had only exhibited her work in black and white, but the light and the shadows reflecting off of the sandy, ancient Egyptian ruins inspired her to visualize things in color.

Marlene presented her pintographs at Harrod’s in London in 2005 in an exhibition titled Iconic Egypt and Beyond. That’s where she met the woman from Nepal, the one with exotic facial features and the enigmatic look in her eyes. 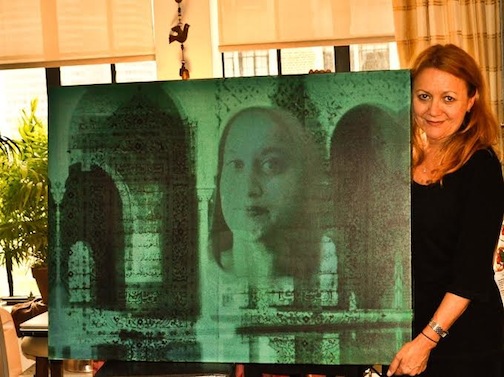 “I don’t even know her name, but I thought she looked like the Mona Lisa,” said Marlene. Her portrait appears in two of the artist’s most recent creations, Gift of Grace and Words of Grace. The pieces, worth $1,400 each, were specially created to be donated to a charity-event supporting victims of the Nepal earthquake. Unfortunately, the event was canceled.

Both paintings, one tinted in gold, the other in blue, feature this half Indian, half English woman’s portrait, superimposed over Arab calligraphy and images of the architecture of Spain’s Alhambra. The palace, which sits on a hill overlooking Granada, was constructed in the thirteenth century and exists as a symbol of the multicultural society of Moorish Spain. With its courtyards, domes, columnar arcades, gardens, muqarnas, and Arabic inscriptions, the architectural masterwork was thought to be a physical realization of the descriptions of Paradise in medieval Islamic poetry. “I merged those two images for it represents a dialogue among diverse cultures from the intimate to the multicultural aspect of humanity,” she explained. 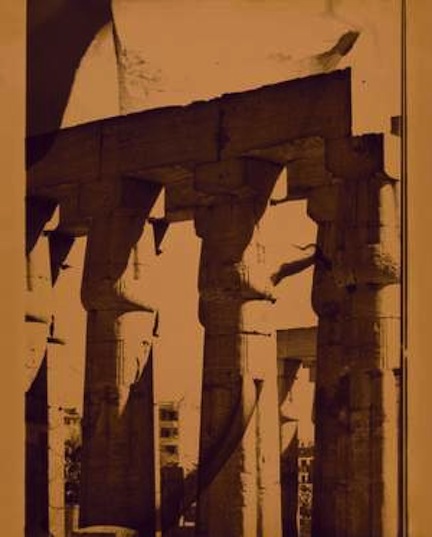 From the series Iconic Egypt by Marlene Luce Tremblay

“What’s happening now in the Middle East is giving everything that is Arab a negative connotation,” she said. As a result of her travels and the many friends she’s made along the way, Marlene realized that Arabic civilization is so different from that of the West, yet as people we share so many commonalities. “We’re all human. Pain is the same. We can all feel it, in different ways. Joy, love, pain, those things have no nationality.”

Marlene plans to continue nurturing this interchange between cultures. Next year she will be traveling to Morocco where she is organizing an exhibition with her female Tunisian friends. “We call ourselves ‘The Dream Team.’ We come from different cultures, but there is a nice symbiosis when we exhibit together. There is a dialogue between our art.”

She is also preparing for an upcoming show at the Ashok Jain Gallery in downtown Manhattan in January. “I’ve had a few shows in New York. It’s not easy because there are so many critics, and also a lot of people competing. You know the saying, ‘If you can make it in New York, you can make it anywhere?’ It really is true.” 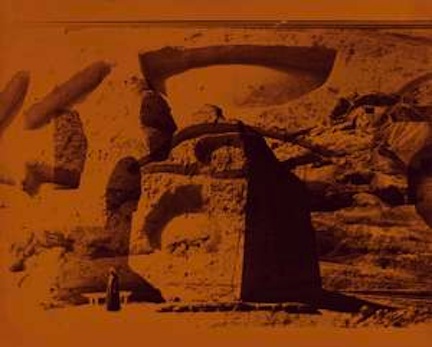 From the series Iconic Egypt by Marlene Luce Tremblay

Despite her international artistic success, Marlene is still an emerging artist because she’s not relying entirely on her work to support herself. She hopes to retire in two to three years so that she can fully devote her time to her passion, art. New York City has proven to be a source of boundless inspiration for her work. “Paintings of light,” she calls them. As a result Marlene has encouraged viewers to look at their seemingly grey, sometimes-monotonous surroundings through the vibrantly surreal perspective of her own distinctive lens.

And as for the answer to that existential question she asked herself years ago, about what really matters in life? She’s realized, “It’s love, love of people, love of nature. Love is at the base of everything. When you go what you take with you is love. The love you gave, the love you received. That has been my journey, and it still is.”