At the Vatican, Bill de Blasio Pledged To Reduce Carbon Emissions in NYC by 40 Percent by 2030. Here’s How.

New York City Mayor Bill de Blasio attended an event at The Vatican with other mayors from around the world to discuss climate change and the challenges it poses to their cities, as well as global warming’s role in modern slavery.

The event was prompted by the Pope’s recent climate encyclical, wherein he called for an ‘ecological conversion’ for those of faith, and laid blame on developed countries for the consumerism and consumption that drives our warming planet, largely at the expense of the poor.

During his speech, de Blasio called the pope the “highest moral authority,” and said that the encyclical “burns with urgency,” and that the Pope had “awakened people across the globe to the dangers we face as a planet.”

“The encyclical is not a call to arms,” de Basio said. “It’s a call to sanity.”

“He (the Pope) is literally saying we have to reset our assumptions and think more deeply and more morally about our actions because our current sense of practicality is digging our graves,” de Blasio said.

De Blasio, who arrived 80 minutes after he was scheduled to speak due to a diverted flight to Milan caused by fog, said that it was “painfully obvious” that politicians need to set “difficult goals for themselves” to combat climate change.

An international meeting of mayors, the most powerful municipal officials, is naturally a great place to make a call for action on an issue many national leaders refuse to accept. In fact, the only North Americans mayors in attendance were Democrats; all Republican mayors that were invited declined to attend, The Guardian reports.

As such, de Blasio called on local mayors to take on the issue themselves and “jolt our national paradigms.” He said that he hopes the Pope’s visit to Washington D.C. will have a “cleansing effect” on Congress. 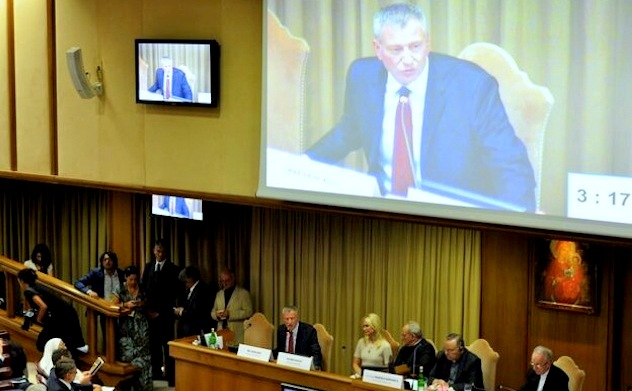 Mayor de Blasio speaks at the Vatican on Tuesday, July 21

The mayor pledged that he and his administration would work to cut New York City’s carbon emissions by 40 percent by the year 2030. That may sound unfeasible, but de Blasio had already committed to cut emissions by 80 percent by 2050, also referred to as the ‘80×50’ initiative. The 40 percent by 2030 is just an interim goal.

“Is it not the definition of insanity to propagate corporate policies and consumer habits that hasten the destruction of the earth?” de Blasio said.

He also noted the important role that the United Nations Climate Change Conference in Paris in December would have, saying, “We look ahead to the Paris summit, just months away. We need to see it as a finish line to a sprint.”

“Paris may constitute our last best hope,” he added.

Though every mayor in attendance represents a different geographical location with unique vulnerabilities to climate change, New York City is literally built on a collection of islands. There are roughly 520 miles of coastline, including entire neighborhoods.

Hurricane Sandy, which flooded several of New York City’s low-elevation coastline neighborhoods in 2012, illustrates the difficulties the city faces from climate change. The city ordered 375,000 evacuations and more than 76 evacuation shelters were opened. The total cost of the storm to New York City was estimated to be $19 billion, including $4.5 billion in costs to city agencies, and $800 million to the Department of Transportation for street repairs.

This is, inherently, a climate change issue. Global warming causes polar ice caps to melt which means a rising sea level, a problem for many of New York City’s low-elevation coastline neighborhoods.

Global warming also increases the temperature of surface water which causes storms to both occur more frequently and in greater size, which could lead to power outages, the destruction of trees, and costly damage to the New York City subway system. 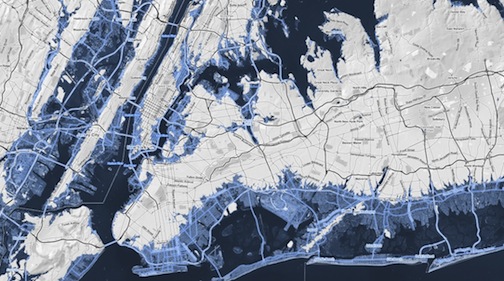 The much feared 2° degrees of warming would reshape the five boroughs. According to an interactive map, Surging Seas, published by Climate Central, the city would lose much of Lower Manhattan, West Queens, South Brooklyn, South Bronx, The Rockaways, and East Staten Island, among other areas.

Though Hurricane Sandy occurred prior to de Blasio taking office, he has made combating climate change a cornerstone of his progressive agenda. On July 12, he put out a request to the energy industry to identify new renewable energy capacity to help the city power 100 percent of City government operations through renewable sources.

“This is a call to the marketplace: the biggest energy customer you’ll find is ready to put our money where our mouth is when it comes to renewable power,” the mayor said. “Our administration has made an unprecedented commitment to dramatically reducing our environmental footprint, becoming the largest city in the world to commit to 80×50. Now, by leveraging our energy purchasing power, we aim to catalyze new capacity, chart a path to powering 100 percent of City government from renewables, and make clear why New York City remains a global leader in the fight against climate change.”

In order to reach the 80×50 goal, the City will have to reduce emissions by approximately 43 million metric tons per year. Since residential and commercial buildings account for almost three-fourths of the city’s total carbon-dioxide emissions, the plan will cover the City’s more than 4,000 buildings and facilities. The plan will also cover traffic lights and street lights, which are big electricity hogs. The City spends between $600 million and $650 million a year on four to five terawatt hours of electricity, resulting in 3.2 million metric tons of carbon dioxide, roughly seven and a half percent of the city’s greenhouse gas emissions.

The largest source of renewable energy in the area is from hydroelectric and offshore wind is rapidly developing. While the city is expected to utilize these methods, the administration does not want to take renewable energy from an existing source. They want to incentivize new clean energy projects.

In addition to the City’s quest for new renewables, the City has six goals  for creating a more sustainable city, as part of its OneNYC Plan for a Strong and Just City. 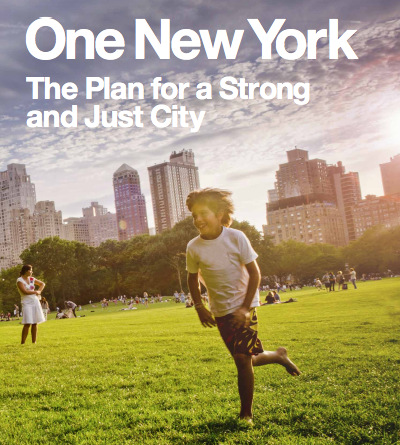 An image from the City’s OneNYC campaign

(2) The City intends to send zero waste to landfills by 2030. They estimate that New Yorkers, in their homes, throw out nearly 15 pounds of waste every week per person, as well as nine pounds in commercial establishments. 6 million tons of waste is disposed of annually. They intend to accomplish the goal of zero waste by expanding the organics program to serve all New Yorkers by the end of 2018, enhance the curbside recycling program by offering single-steam recycling by 2020 as well as increasing other recycling measures, including textiles and electronics, cut down on plastic bags and other non-compostable waste, make schools “Zero Waste Schools,” and reduce commercial waste disposal by 90 percent by 2030.

The City has already taken steps in that direction. In July, the de Blasio administration instituted a ban on foam packaging from sale, distribution and use, though a grace period has will be in place until the end of 2015, after which notices of violation will be issued. Banned items include Styrofoam cups, bowls, plates, takeout containers and trays. Packing peanuts were also banned. Some small business and nonprofits may qualify for exemption, however.

(3) New York City will have the best air quality of all large cities in the United States by 2030 by enforcing the updated Department of Environment Protection Air Pollution Control Code, using data analysis and community engagement to identify additional air quality improvements, accelerating conversions of residential heating oil boilers in buildings, and cutting emissions from vehicles.

(4) The City will clean up contaminated land (also known as brownfields) that affects low-income communities with disproportionate high levels of exposures, and convert the land for safe and beneficial uses. They will accomplish that by accelerating the cleanup and encouraging private investments in new development on brownfield sites, encouraging community engagement by creating place-based community brownfield planning areas, and by facilitating clean-up in certain areas to reduce the risk posed by storms.

(5) The city intends to curb neighborhood flooding and offer high-quality water services. They will do that by protecting the city’s water supply and maintaining the current systems. They will also install or repair 500 water fountains and water-bottle refilling stations in the five boroughs, expand green infrastructure and ‘smart design’ for storm water management, and reduce pollution from storm water runoff.

(6) The City intends to invest further in parks and public spaces, which are currently underfunded. More than 200 parks received less than $250,000 in capital investment in the past 20 years. The City plans to use equity data to direct investments. Those investments will go in part to strengthening the utility of parks and public space in under-resourced and growing neighborhoods. The City will also improve open spaces through its new Parks Without Borders strategy to enhance access and connectivity. They will reduce light pollution from large buildings during the night, open up more streets for recreation and congregation, create more aesthetical streets, and use renewable energy in parks and open spaces.