No parking: Cultural Exchange in the Name of Art

As the center of the contemporary art world, New York City offers practicing artists infinite possibilities, yet so many of them struggle to enter into the competitive global art market. If artists are not represented by a museum or a gallery it becomes difficult for them to share their work with the public. No Parking, a new exhibition at the Galleria Ca’ d’Oro, organized in collaboration with the newly founded Without Paper Gallery, presents the works of a group of twelve artists hailing from all parts of the world. Despite the diverse nature of their artwork, the pieces in this exhibition sinuously fuse together to speak out against those constraints.

Without Paper Gallery was established three months ago by curators Anna Di Falco and Giuseppe Ruffo. The name “Without Paper” refers to the Italians who immigrated to America in the last century without any documentation, in search of a better life. As a result of this passage, elements of Italian culture were merged with American culture. Through the founding of this organization Ruffo and Di Falco, who are both from Naples, aim to encourage local and international artists to collaborate on artistic projects, fostering an international cultural exchange in the contemporary art world that is not restricted by the regulations set by the global art market. 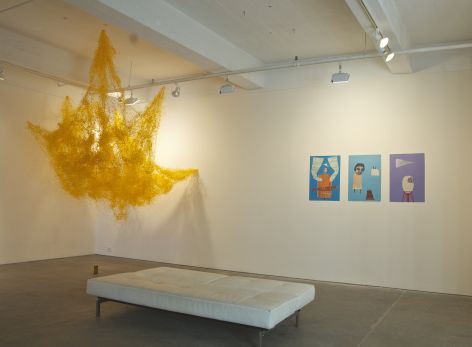 “New York is not the world, but it is filled with people who come from different backgrounds. Our goal is to find artists from different walks of life that represent those backgrounds. We want to put together different realities so that we can create a dialogue,” Ruffo told La VOCE.

The show, on view until August 12th, features a variety of artworks by an eclectic group of artists  each working with very diverse mediums.

Upon entering the exhibition space, visitors find themselves walking beneath an installation that gives the impression of white storm clouds ethereally floating overhead. The tridimensional forms, which were crafted from white cable ties and illuminated by ceiling lights, cast a mystical shadow on the white-washed walls of the gallery space. Mostly Cloudy is the work of artist and interior architect Sui Park, who creates three-dimensional organic forms that range from abstract representations of objects, landscapes and living organisms, to social ideas or values. 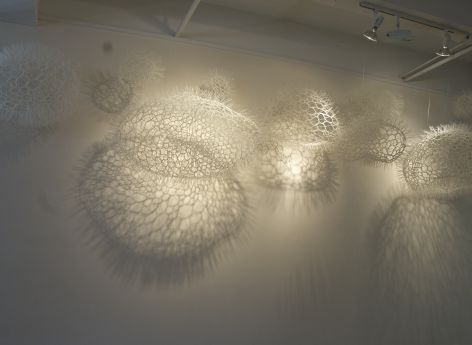 As the visitor passes through the storm clouds, she finds herself standing before a heap of tangled cables, blinking traffic lights, flickering computer screens, ejecting CD-ROM trays, and broken electronics. This curious installation is part of a series titled Digital Being, in which Brooklyn based digital media artist and technician Taezoo Park creates mounds of technological garbage to reveal the “character” within digital technology that not only exists, but responds to its environment.

The majority of the artworks, projections, and installations are openly displayed, but don’t leave before exploring the secret passageway. The white painted door blends in seamlessly with the gallery walls, but upon opening the portal the viewer is suddenly immersed in Sabrina Barrios’s Yuga Cycle, a dark room illuminated by neon blue threads that form geometric shapes. The visitor is invited to take a few steps into the installation and create her own path within the piece. Through her installations the Brazilian artist combines quantum mechanics with immersive bodily explorations. “My works are a metaphor for life,” said Barrios. 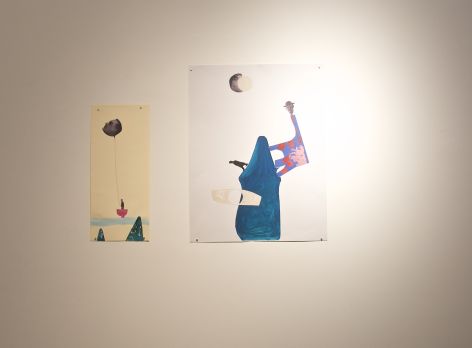 “The term cosmopolitan was coined by the Greeks,” contemplated Ruffo. “They were the first to recognize and foster the different stylistic canons that existed in a multicultural city. Man was a citizen of the world and was not restricted by institutions or society.” Through No Parking and the founding of Without Paper Gallery Ruffo and Di Falco aim to encourage artists to continue practicing their works in an environment that frees them from the constraints of established art institutions such as museums.