A Trip to the South-East of Italy: to the Discovery Ragusa and its Province

Ragusa and its province: the last bastion of Italian culture, on the trail of the Baroque period and Sicily’s most renown fictional character Detective Montalbano

Before Sicily’s most beloved fictional character – Detective Montalbano – existed, there were the Greeks, the Romans, the Byzantines, the Arabs and the Spanish. And then, came the pen of the author Andrea Camilleri and the movie camera of the famous series’ director Alberto Sironi to recount Detective Montalbano’s adventures and places, making them part of cinematic history. And of an unforgettable journey for many tourists.

A journey through the province of Ragusa, a corner of Sicily that is famous for its Baroque history and art, for crystal-clear beaches, massive selection of fine wine and cuisine, aristocratic 1700s’ palaces and quaint cities reminiscent of cozy Nativity scene reproductions.

Here too, in Montalbano’s hometown of Vigata, everything has its origins in a myth. Hybla, the goddess of fertility and protector of the grain harvest and who was often associated with Aphrodite, was one of the Sicanian goddesses that entered the Pantheon of Sicilian divinities. Ibla, as the Italians call her, gave the name to the three Greek colonies with ties to the goddess: Megara Hyblea, Gela, and Ragusa Ibla.

The Ragusa province is very fertile, as if kissed by the goddess herself. This is a sort of Sicilian Food Valley where people sell products straight from the local farms and restaurants, like almonds, milk, tomatoes, cheese, jagged lavender, capers from Ibla, fruity mint, Ragusa provolone, carobs, onions from the town of Giarratana, the prestigious and now international wine of Cerasuolo di Vittoria and Frappato and the chocolate from Modica that is faithful to the ancient Aztec recipe.

The cuisine is land based and reflects the historic empires that ruled over the island and their cooking styles: Magna Graecia, the Arabs’ desserts, variety of meats cooked in the Jewish tradition, the delicacies of the “monsieurs,” the French cooks of the aristocratic families, however, filtered through the use of Sicilian products.

The typical plates of this province are tied to the agriculture: the focaccia bread, homemade ravioli, the meat strips boiled with aromatic herbs, and Mpanatigghi (sweet pastries filled with ground beef sweetened with sugar, cocoa, lemon peel, vanilla and other sweet ingredients).

Here, agriculture turns into wealth and even ingenuity. Sicilians call this province “babba” – “simpleton” – because farmers have always worked the land with a disregard for political events and regional issues. These days, they celebrate a modern, sustainable agriculture that creates jobs for many young entrepreneurs, farmers 2.0, young minds that have just returned from their first escape attempt abroad. This renovated Sicilian cuisine has won awards from guides and critics as a true symbol of a Sicilian culinary renaissance, led undoubtedly by the South-East of the island with the skills to reinterpret old traditions with a new spirit, creating a gourmet cuisine without sacrificing authenticity.

This is a true new wave of cuisine represented by Sicily’s new generation: gourmets, young chefs that have acquired their training off the island, but have returned, creatively reinterpreting a cuisine that follows the course of history and that by now has been entered into the history books.

Ragusa and its province are also the land of wine and historic wine cellars that knew how to update themselves, but also of younger ones in which new talent has invested. They, like the young chefs, have presented a fresh new idea of Sicily, freeing it from persistent stereotypes. A cosmopolitan, European Sicily, capable of functioning with its feet planted in the South of Italy and with its head in the international sphere.

In Ragusa Ibla, the old city, which is the southernmost capital of Italy and that reaches to the southern Iblean hills, the beauty of the Baroque period is on display. Ragusa, which is famous for its bridges and 42 churches, and the other cities of the province entered into the UNESCO Olympus as well as into the homes of millions of television viewers.

This is a beauty that stems from intricate details blending beautifully with the dramatic majesty of the Baroque, as in the imposing façade of the Duomo of Saint George, the Cathedral of Saint John the Baptist, the bell tower of the Church of St. Mary of Itria, the Church of Santa Maria delle Scale and the Gothic-Catalan entrance of Saint George. The palazzi – among the most well-known the Palazzo Cosentini, Palazzo Zacco, Palazzo Bertini – in the streets of Ragusa are the symbol of a rich and cultured Sicily. Her aristocracy, since the early 19th century, assembled in the “Circolo di Conversazione,” – the conversation clubhouse – known as the “Caffè dei Cavalieri.” This meeting place of perfect Neoclassical style was very much beloved by Pietro Germi and provides the setting for the most famous scenes of his movie “Divorce, Italian-Style.”

In Scicli with Montalbano

If you love the Baroque and you are a fan of the fictional TV series character Montalbano, then you can’t miss Scicli. It is a quaint town made of small tight-knit streets and alleyways, nestled in the intersection of three deep valleys only a few miles from the sea. The late Baroque genius is supremely expressed in the rebuilding of the area after the earthquake of 1693 that razed Scicli and the province of Ragusa to the ground.

It is a city that bears the UNESCO seal and has been immortalized by director Sironi, who chose the municipal building of Scicli as the police station of Vigata. He also made via Mormino Penna live forever in the scenes of the TV series.

But, in order to admire what is called the most beautiful Baroque building in Sicily, you must visit the lavish and grandiose Palazzo Beneventano and its characteristic masks that represent Moors’ heads.

Like in Matera and Pantalica, the valley of Saint Bartholomew and the grottoes of Chiafura give enchantment to the area where nature transforms and is transformed into architecture. Pier Paolo Pasolini defined this natural canyon and historic neighborhood excavated in the rock that was once a necropolis and then a Troglodytic settlement, as a “Dantesque mountain.”

This Matera of the South boasts a “school of painting and sculpture” called the Gruppo di Scicli (Guccione, Sarnari, Polizzi). The famous sculptor and artist, Carmelo Candiano, is also from Scicli.

Not far from Scicli, we find Modica, the city famous for Quasimodo and for Aztec chocolate. A grainy Chocolate, just as the Aztecs made it. In Modica, they celebrate the tradition of chocolate inherited from the Spanish who copied the recipe following their colonization of Mexico.

Legend has it that Hercules founded the city that is today the capital of the Sicilian Baroque. Modica’s rich past includes many chapters: the Phoenicians past, an Hellenization, a Sicanian origins and heavy Spanish domination.

In 1296, with the Aragonese family, the county of Modica became a cultural and political center in Sicily and southern Italy. Its urban architecture is a perfect continuation of its original center: a plateau furrowed by a canyon where recesses have formed.

The small caves of yesterday are the houses of today, leaning one against the other. The intimate quaintness is a given, especially at sunset when the entire city lights up and its Baroque illumination creates a picturesque Nativity-like scene.

There are at least 100 churches to see but it’s worth starting with the ultimate symbol of the Baroque: the Duomo of St. George, the Cathedral of St. Peter, the churches of the Carmine and St. Mary in Bethlehem, the remarkable rupestrian architecture of St. Nicholas, the Church of St. John and its evocative bell tower.

Modica is above all a tangle of clambering narrow streets, a vortex of little streets that are literally breathtaking. You need to discover this city vertically, stopping at the sight of the aristocratic palazzi – Palazzo Cannata, Palazzo Failla, Palazzo Floridia, – all the way to Conti Castle to observe the white Nativity-like scene from above.

The beloved hometown of poet and Nobel Prize winner Salvatore Quasimodo – his house museum on Via Posterla is a must-see, – jealously preserves a culinary heritage that the glorious city of Modica has decided to share with the world only recently. First and foremost, the symbol of Modica, chocolate, obtained with a cold processing that excludes conching, enriched with spices and intense flavorings that can be enjoyed at the Antica Dolceria Bonajuto, a confectioners’ shop. Antica Dolceria Bonajuto, a small shop turned mecca for culinary tourists, is run by the Ruta family, now in its sixth generation of an old and prestigious chocolate-making dynasty, intent on preserving the heritage founded by their paternal grandmother’s father in 1880.

This is a glorious past projected onto a modern present, with a strong focus on tourism. Every day, hundreds of tourists land in the nearby Comiso airport with direct flights from London, Frankfurt and Paris. They are fascinated by the beauty and Montalbano’s key spots.

They are also fascinated by the endless beaches of the finest sand. Just like the iconic beach in Montalbano’s Punta Secca, such as the seaside village of Donnalucata and waterfront of Marina di Ragusa that has yet again won the Blue Flag of Legambiente and a 30% increase in incoming tourism.

In Marina di Ragusa, Sicily leaves behind the stereotype of dirty beaches, trash and inefficiency, to transform into a beautiful town with a sparkling sea, over a mile of bike paths on the beach and facilities for children and people with disabilities.

Young native Sicilians who travelled, or were part of the so-called “brain drain,” have returned here. Like Francesco Vullo and Oriana Bongiorno, a couple that, after an experience in Australia as researchers, has decided to invest in their land, Marina di Ragusa, and opened a business called Arà, producing and selling arancine – the rice balls staple of the Sicilian diet – in Marina di Ragusa’s downtown. They offer tourists and non-tourists a tasty piece of Sicily’s culinary history, based on fresh local products and an emphasis on quality. An investment in the region with already many returns. 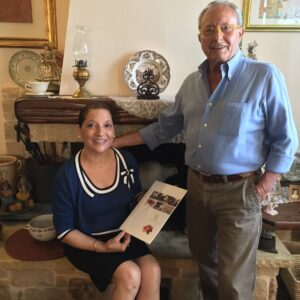 Alda and Franz have not left Marina either, despite their plans to drop everything and fly to Costa Rica and Thailand. Today, Alda and Franz have created the first home restaurant to welcome friends, travelers and tourists on a guided tasting tour of the area. Traditional recipes and food, that are part of the town’s memories, are reinterpreted and refashioned with elegance, harmoniously blending food, culture and the region.

In this corner of Sicily that stretches to the south, the last bastion of Italian identity, we look at the other side of the Mediterranean thinking of Gesualdo Bufalino’s words and his many Sicilies: “It is true that there are many Sicilies, I will never be able to count them all. There is the green Sicily of the carob beans, the white one of the salt pans, the yellow one of the sulfur, the golden Sicily of the honey, and the purple one of the lava.”

Some excerpts of this article are from Liliana Rosano’s book Sicilia e Mito, published by Lighthouse.