At the U.N., Rondine Cittadella della Pace’s proposals for peace

A year after the "Leaders for Peace" initiative to reduce global conflict is introduced, Italy sponsors a conference at the U.N.

New York, December 5th, 2019 – Reduce armed conflicts in the world through the education of future global peace leaders. This is the ambitious proposal of Rondine Cittadella della Pace (Citadel of Peace) that wishes to respond to the need for new guidelines  capable of governing the challenges of today’s globalization in an increasingly divided world.

Rondine returns to the UN – exactly one year after the official launch of its Leaders for Peace Initiative – to renew the message and propose to all Member States, that wish to show their support, the development of what will be the end result of said initiative: the Global Leaders School. A high-level training and specialization offer for students and young professionals from all over the world, in line with the sustainable development objectives of the UN 2030 Agenda 4.7 and 4 for quality, fair and inclusive education.

The event which took place today – December 5th – at the United Nations headquarter in New York was organized in collaboration with the Permanent Representations of Italy, Armenia and Jordan, the European Union Delegation to the United Nations, the Office of the Special Envoy of the Secretary General for Youth, OHCHR and the United Nations Department for Global Communication.

“One year after the launch of the” Leaders for Peace Initiative”, Rondine returns to the Glass Palace to update its activities thanks to its main actors at play: the young students of the Citadel of Peace. They are tomorrow’s leaders. We are here to bring their proposals to tables that matter, those in which we decide how to face today’s challenges on a global level. Rondine is a source of inspiration and example because it places young people on center stage. Peace and peaceful coexistence are based upon openness to dialogue and understanding of one another; values ​​that these boys – despite having lived through dramatic experiences – have made their own through the Rondine method . Today, and precisely in these rooms, we are positively reminded of their importance”.

“For the first time in its history, Rondine is set at the center of an event promoted not only by our Country, but also by representatives of other Member States and UN agencies. This goes to show both the recognition and the strong potential expresses by the methodology it proposes. A potential also reconfirmed by the interest shown by the American and Canadian academic world ” quoted Franco Vaccari, President of Rondine Cittadella della Pace, adding: “We face a global challenge: to redesign the future of relationships between governments and society. A Challenge in which we want to involve countries by asking to support the Leaders for Peace Initiative and actively participate in the creation of the Global Leaders School in order to consolidate its effective educational tool. One open to the youth of all nationalities who wish to be trained as leaders in the field of politics, business and training”. 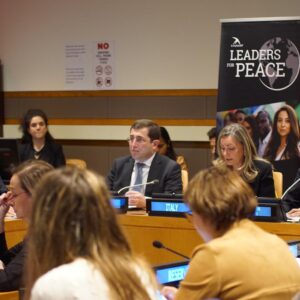 One year ago, exactly seventy years after the Universal Declaration of Human Rights, Rondine’s young students launched at the UN in New York the  global “Leaders For Peace Initiative” by asking heads of state to allocate a symbolic amount of their defense budget – corresponding to the cost of one weapon – in order to finance peace leadership scholarships and set the specific focus on human rights, in their national education programs. After Italy’s commitment thanks to Prime Minister Giuseppe Conte’s signature on the Leaders for Peace Initiative, Rondine intends to make its own method available to the world. One based on twenty years of experience in educating the younger generation in conflict resolution, second-level diplomacy and the promotion of peace and human rights with the aim of defusing conflict, through dialogue, and turning it into an opportunity for the growth and development of society. A Method that was also the focus of a tour of lectures and meetings, held by President Franco Vaccari, in the most prestigious Canadian and American universities, including St. Michael’s College, University of Western Ontario and King’s College, Manitoba University, St. Paul’s College , in Canada, the George Mason University and the American University of Washington, the National Center for Truth and Reconciliation and the Center for Human Rights Research and, finally, the prestigious Harvard University.

Overall, the objective is to build a leadership model that can become an effective instrument of peace as well as a model that responds to the specific global needs that will emerge from the reflection started at the United Nations working table.