Here’s What Trump Will Do as an Anti-Establishment President

Interview with Andrew Spannaus, author of "Why Trump Wins"

While the GOP Convention goes on in Cleveland, Ohio, here at LaVOCE di New York we interviewed Andrew Spannaus, author of the Italian book Perché vince Trump, Why Trump Wins (Ed. Mimesis, 2016) in order to understand the reasons that brought Trump to be the official Republican candidate for the 2016 Presidential Election.

Spannaus is an American journalist and analyst who deals with the USA’s strategic relationships, focusing in particular on the link between finance and real economy. In 2013 he founded the service Transatlantico which provides analysis and consultancies about economy and geopolitics.

In his essay Spannaus explains why the success of the New York entrepreneur goes far beyond his aggressive statements. Trump focuses on economy and external politics with new ideas, often more left-wing than those of his rival Hillary Clinton. Furthermore, the author studies the revolution that is going on in American politics, where the dividing line between Democrats and Republican is getting increasingly unstable, leading to a whole new dichotomy: the clash between the establishment and the outsiders.

Often Trump’s ideas have proven to be far from the normal GOP politics, sometimes “even more right-wing than Clinton.” Whatever the results, how deeply have these elections transformed the terms Democratic and Republican? Is there still a distinction or has it been irreversibly blurred?

“A realignment of the American political system is currently underway. The success of Donald Trump and Bernie Sanders in the primaries is changing the division from Democratic and Republican, to establishment and outsiders.

For decades the major parties have run their campaigns based on identity politics, crafting specific appeals to various sectors of the population based principally on wedge issues, presented in cultural and religious terms for example. Different issues are now taking center stage, such as the destruction of the middle class, and the widespread opposition to a foreign policy based on perpetual war that is not in the true interest of the United States.

It will not be easy for the establishment to accept this change and admit the failure of its policies, but a shift is necessary, unless we want to see an even more chaotic political situation in the near future”.

Your book repeatedly states that the 2016 Presidential Election is not the traditional battle between Democrats and Republican, rather the true contest is now between the establishment and the outsiders. According to this new dichotomy, Trump and Sanders find themselves on the same side of the battlegrounds. Can we actually associate them to such an extent/degree?

“The anti-establishment sentiment is present across the board in the U.S., as well as in Europe. This leads to a surprising convergence of views between left and right. Consider the question of the financial crash: the outsider candidates all draw on popular disgust with the bank bailouts and the fact that no bankers went to jail. The more centrist candidates – who receive significant amounts of money from Wall Street – avoid taking a strong stand on issues such as breaking up the too-big-to-fail banks and reinstating the Glass-Steagall Act.

We see a similar phenomenon on foreign policy. Despite their bombastic rhetoric on terrorism, Donald Trump and Ted Cruz both criticized the war in Libya, and stated their willingness to negotiate with Vladimir Putin rather than start another war, in Syria. On the Democratic side Bernie Sanders drew a strong contrast with Hillary Clinton on these points. There are many important differences between Sanders and Trump, but on these two issues their rhetoric is quite similar”.

One of the few points where Trump’s platform converges with the classic Republican campaign is on personal firearms possession. Given the recent events in Orlando and Dallas, firearms’ lobby has undergone great pressure because of public opinion. Even if he’s offered his condolences to the victims’ families, Trump does not desist from his favourable support of the National Rifle Association (NRA). On the contrary, he almost always cleverly transforms the perspective to use these massacres in his favour. Will Trump’s position on the possession of firearms have an influence on his percentage of seats or will it take a back seat to more provocative statements?

“Trump’s position on gun control has changed over the years. It’s not surprising, given that his campaign is based on playing to the fears of the population – some legitimate, others not, in my view. On guns he has found a position where he can align himself with the Republican party, and counter the claim that he is not a conservative, all while avoiding strong opposition from the NRA”.

The Republican Convention in Cleveland began yesterday: do you think there will be any surprises or will the establishment bow to the candidate who has received the majority of votes?

“The Never Trump campaign seems to have failed. Whether you want him to be the nominee or not, the notion that the party establishment should change the rules to exclude the candidate who got by far the most votes is more than a little bit dangerous. It’s a continuation of the attitude that got us into this situation today: the view that the élites can manage the country without having to listen to the “ignorant” people. Right or wrong, we had better understand why people are voting for an outsider like Trump, or the disconnect between the population and the establishment will only get worse. It’s not enough to be politically correct, without addressing the deeper currents fueling the protest”.

The Trump campaign has been almost exclusively criticized for its strange behaviour toward political correctness. In your book, you affirm however that no one has dared criticise Trump for the content: is this because the content is essentially valid and thus critics are at a loss and know not how to reply, or have they been overshadowed by the candidate’s irreverence and by the proposed superficial analyses? 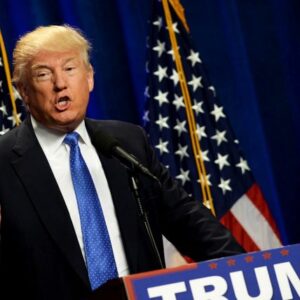 “It’s normal and healthy to be worried by the offensive tone of Trump’s campaign. Nevertheless, his main focus on the trail has been on the economy, i.e. on the loss of well-paying, stable jobs and the need to rebuild a strong economy. I don’t think he has a clear idea of how to do that, but on the other hand, most of the media and the political institutions have no answer for his criticisms of the policies that are hollowing out the middle class. What can the experts say? That the loss of millions of industrial jobs is actually good for us? It’s hard to defend a failed policy, so they mostly tend to ignore the issue. It’s clear though that Trump’s success is based on this type of appeal, which goes beyond the theatrics on which most of the media prefers to concentrate”.

Trade treaties: from the onset Trump vehemently opposed the TPP (the Trans-Pacific Partnership). If this won’t be approved, problems would arise also for the TTIP (the Transatlantic Trade and Investment Partnership), the bilateral treaty that should regulate trade between the U.S. and the European Union. In your book, you state: “A Trump presidency could signal a partial return to protectionist tool […] Hillary Clinton instead would maintain the charted course of the last decades.” (check translation, pls). With Trump, then, could trade relations with Europe (and thus Italy) fall apart?

“The abandonment of the so-called “free trade” policies of recent decades would not mean a collapse of economic ties with Europe or other areas of the world. The alternative is to return to the historically successful “American System” which focuses on productive investment and the protection of the real economy. This means proper regulation, rather than favoring only those at the top. A race to the bottom based on lower wages and lower standards is not in the interest of the United States or of Europe.

Economic ties are important, and geopolitical considerations are the main driver behind the TPP and the TTIP, in a world where China’s role is growing rapidly. The question is how to improve economic ties without making the same mistakes that have led to stagnation and decline of living standards for a significant portion of the population in the past 35 years”.

If Trump will actually win the elections in November, what do you think he will do during the first 100 days of his Presidency?

“Trump faces some important structural disadvantages that will make it hard for him to win the White House. If he does get there, the question is if he can control himself and actually concentrate on substance, or if he will need to be controlled by others. I believe our institutions are strong enough to handle this shock to our system, although my impression is that most of the political establishment thinks that in the end everything will be fine because Trump is a scary, unprepared candidate who won’t be able to win.

If Hillary Clinton does win, she will need to start making serious changes on economic and foreign policy: a return to promoting solid economic growth, reining in the parasitical activities of certain sectors of the financial world, and the continuation of the recent shift towards diplomacy, rather than continuous war. It won’t be easy, as her instincts seem to go in a different direction, but it’s necessary for the future of the country, and to influence the direction of international economic and strategic relations in the coming years”.

Trump recently announced his Vicepresident running mate to be Mike Pence, current Indiana governor with deep social conservatism. Was Pence getting the nod predictable or a surprise?
The choice of a running mate was a difficult one for Donald Trump. In the primaries he essentially ran against the apparatus of the Republican party, and succeeded in beating a number of candidates the establishment would have preferred. He knows that if he is seen as patching things up with the party, then he will lose some of his appeal as an outsider.

“Pence is a conservative pick from this standpoint, a politician who represents more traditional Republican views, rather than a surprise who can continue to shake things up.

So while Trump tries to use Pence to build a bridge with the Republican Party, Pence has to change some of his positions to get in line with Trump’s outsider campaign – such as on Social Security and foreign wars. Contradictions abound in a year where traditional categories are being shaken up”.