Religion Is Back. In his New Book Manlio Graziano Discusses the Reinforced Relationship between Faith, Politics, and Wars

It is in these words that Manlio Graziano, columnist for La VOCE, and Professor of Geopolitics and Geopolitics of Religions at the University of La Sorbonne and at the at the American Graduate School in Paris, found inspiration to write his book, Holy War and Holy Alliance: Religions & International Disorder in the Global 21st Century. The work, which addresses the relationship between religion and politics, was first published by Il Mulino in Italy on January 15, 2015. In a conference organized by UNCA (the United Nations Correspondence Association) Professor Graziano presented the English version of his book, published by Columbia University Press. The event, held at the United Nations Headquarters, was moderated by Stefano Vaccara, editor in chief at La VOCE di New York, and featured an introduction by Brian Knowlton, retired New York Times correspondent, and translator of the book. 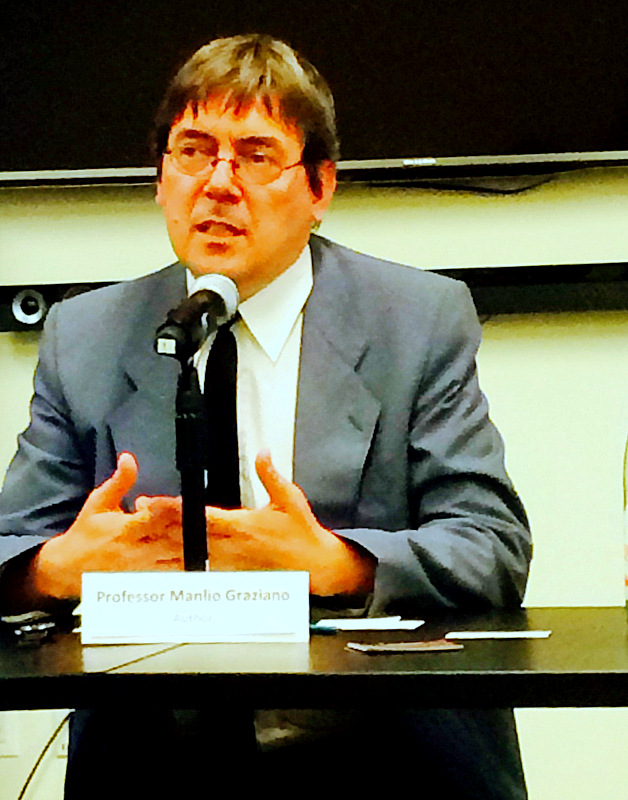 Professor Graziano shared with an audience his controversial ideas on the link between religion and politics, which he expounds upon in his book. Since the beginning of time religion has played a role in governing societies, but according to the professor, it is especially since the mid 1970’s that religion has become again a major political actor in  developed and developing countries all around the world. Religious institutions are taking the place of secular ones and consequently, the political struggles that have often defined the clashes among powers have become religious ones as well.

However, Professor Graziano holds that while today many wars are presented as religious conflicts, they are often not caused by religion at all. People make the mistake of thinking that the solution to these problems can be found via religious means, often turning to sources such as the Bible in search of a justification for a cause they feel strongly about. However, this approach is problematic. For example, in the Bible one can find teachings that both justify and condemn issues such as abortion or slavery. And so, he argues, religious texts cannot, and should not, be used as reliable sources for solving wars.

Among some of the issues the professor mentioned was ISIS. Though the jihadi militant group is not cited in his book, which was written in 2013, he believes that the behavior of ISIS is strongly linked to his argument, stating that the issue in Syria and Iraq is a political one, and not a religious one, contrary to what many think. He said, “Religions are used for political purposes and this is one of the cases in which religion is heavily used. To summarize, it is a fight between Saudi Arabia and their allies, and Iran and their allies. It very easily becomes a fight between Shiism and Sunnism. But we need to study and discuss, not the differences between Shiism and Sunnism, but the issues between Saudi Arabia and Iran.”

Professor Graziano also explained that a large section of his book is devoted entirely to the Catholic Church. In his text he distinctively identifies two types of religions: passive and active. Most religions, he says, are passive, meaning that they lack the organized and effective leadership necessary to play an active role in politics. Sunnism, for example, while it may make up the largest branch of Islam, does not have a leader to officially establish its position in the Islamic world. According to Professor Graziano the only active religion in the world today is Catholicism with the Pope at its head. As one of the most powerful religious organizations, the policy of the Catholic Church today is to gather all religions in the world to create a “holy alliance.” 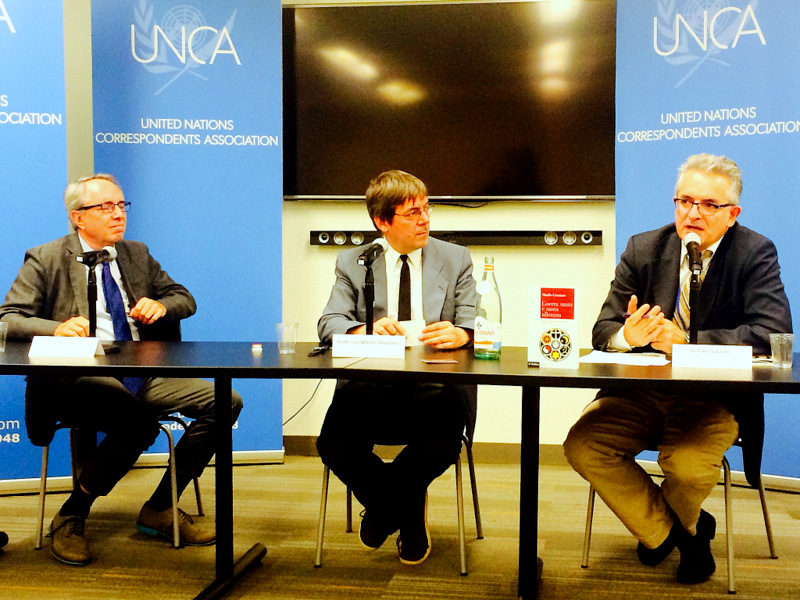 One of the most stimulating parts of the conference was when the floor was opened up to questions. One inquiry made by Linda Fasulo, correspondent for National Public Radio (NPR), challenged Professor Graziano’s claim that Israel is not at the heart of the conflict in the Middle East, but is instead “used as a pretext for fighting.” He traced the history of Israel to 1947, stating that the turbulent situation in the Middle East was brought about by the outcome of World War II, which included a large mass of the Jewish population leaving Europe to find another country, and the decline of the British Empire, which for several decades, the professor stated, “had utilized the Arabs and Jews fighting against each other to its advantage, so the UK they could remain in the area, a purpose which was fundamentally linked to the possession of India.” The British where so intent on controlling the Middle East because it serves as a gate to India. However, in 1947 the Soviet Union and the United States were allied in pushing away any colonial powers, British, French, Dutch, etc., everywhere in the world. Finally, by 1947 India and Pakistan became independent as a result of the United Nations Partition Plan. Israel, therefore, stated the professor, “was not the creation of Zionism, but the creation of the Soviet Union’s alliance with the United States. This is a fundamental misunderstanding that is cultivated in Israel by officials, that Israel is the creation of the Zionist movement. No, it is the outcome of international relations.”

Graziano’s thought-provoking presentation “raised a Pandora’s box of questions,” as one audience member, Carla Stea, Global Research's Correspondent at United Nations headquarters, remarked. “If it is not religion, we have to understand and study what are the essential causes of battles and wars,” explained Graziano. These are the kinds of questions that the professor tackles in his book, which will be released in the United States in January 2016. In it he provides readers with a unique perspective on the causes of the “holy war” in a modern society, and stresses the possibility of a “holy alliance” between the main global religions, including Christianity, Islam, Judaism, Buddhism, Hinduism, Shintoism, and so on.