Bravo Those Who Understand the Great Beauty is in Our Language

An interview with Giuseppe Patota, author of the book "La grande bellezza dell'italiano"

READ THIS ARTICLE IN ITALIAN

Professor Giuseppe Patota is a faculty member of Italian linguistics at the University of Siena (Arezzo branch), author of over a hundred publications consisting of books, chapters, articles, and texts all about Italian language use. Recently, he also published Bravo!, an analysis of a word that has come to represent a people. In addition, he is the linguistic consultant for Rai Scuola (educational television) for the realization of television shows aimed at teaching Italian to foreigners, an academic with the Accademia della Crusca, a jury president of the Italian Olympics organized by MIUR (Ministry of Education, University and Research), and director of the series “Grammatiche e lessici” (grammar and vocabularies) and “Le varietà dell’italiano” (Italian language variations).

His latest book, La grande bellezza dell’italiano (literally, the great beauty of Italian), is divided in three parts, each part dedicated to one of the three founders and models of our language, Dante, Petrarca, and Boccaccio, and the author lets us know that the first great beauty of Italy is most certainly its language.

Professor Patota, what was your underlying motivation for writing your book La grande bellezza dell’italiano? 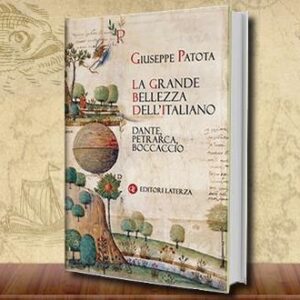 “My primary motivation was to reconstruct historical reasons behind a paradox. The link between Italian and beauty that appears in the title of my book actually is unacceptable on at theoretical level: why should a language in and of itself possess beauty? Languages per se are neither beautiful nor ugly, whatever the criteria established to describe them: they simply are. Historically, however, the link between Italian and beauty is at the roots of conventional wisdom, which for so long has appealed to cultured people around the world. From the Renaissance on, great foreign writers and artists have qualified Italian with dozens of positive adjectives: harmonious, delicate, sweet, elegant, fluid, delicate, pleasant, gracious, smooth, melodic, pleasing, seductive… the list could go on.

Another reason is less positive. I’m sure that the connection between the title of my work and that of the 2014 film that won Paolo Sorrentino an Oscar did not escape you. My book is also the result of the (melancholic) persuasion that the contrast of the immeasurable beauty of Rome to the squalor of those who inhabit it, as told by Sorrentino, could also be extended to many other relationships that concern us Italians: amongst which we find the relationship that exists between our language and the respect we have for it.”

In your book you describe the journey undertaken by Italian through the founding fathers and models of our language, Dante, Petrarch, and Boccaccio. What is the secret behind the success of their masterpieces The Divine Comedy, The Canzoniere, and The Decameron?

“The Comedy, Canzoniere and Decameron safeguard in them not solely a single secret rather hundreds of them: a number that increases each time we read or reread these masterpieces or even just sentences from them. For obvious reasons of brevity, I will limit myself to only one example from each book.

In Canto XXXIII of Paradise, Dante offers a vision that brings any reader closer to the idea of God (or, if you prefer, of the Universe), closer than thousands of treatises of theology, physics or philosophy could ever do. He claims to have seen, in the depth of the light, tied with love like a single book, that which the universe “opens on a specific page,” that is, appears scattered in single sheets: «I saw that in its depth far down is lying / Bound up with love together in one volume, / What through the universe in leaves is scattered». When I read these verses I can’t help but think that Dante did indeed see Paradise!

With regard to Petrarch: in composing his Canzoniere, he was drawn to numbers as well as the binary system, I won’t say like Alan Turing, Bill Gates or Steve Jobs, but almost. Let’s do some math. The Canzoniere is a collection of 317 sonnets, 29 canzoni, 9 sestines, 7 ballads, 4 madrigals: in all 366 compositions (equivalent to the number of days in a leap year) or 365 compositions (equal to the number of days in a year), plus an introduction. In a sonnet, Petrarca tells us that his first meeting with Laura happened on April 6, 1327. Then in a third sonnet, we derive that Laura died (her life cut short by the plague) exactly 21 years later, April 6, 1348. In both cases, Petrarch dedicates the number 6 to Laura. The pieces in Canzoniere are 366 because in this number, which is a multiple of 6, the 6 appears twice, just as twice it plays a fatal role in the love story: on April 6 is the first time they meet, another April 6 there is death. The sum of the factors of 366 is 15, and the sum of the factors of 15 is once again 6; and 6 are the number of letters that spell out the Latin form of Laura’s name, that is Laurea.

If Petrarch was an engineer of words, Boccaccio was a master of the spoken word. The protagonist of the tenth novella of the sixth day of his Decameron is Frate Cipolla, a likeable swindler who, in delivering a sermon to fool his parishioners so that he could collect some rich alms, transforms with words a stroll on the streets of Florence to a mysterious voyage to the ends of the earth, from which he returned with a relique as prestigious as it was false: «some of coals used to roast Saint Lawrence.» «Whosoever has the sign made on him with this charcoal – says Frate Cipolla – may live for a whole year secure from fire, and may touch it without feeling it!» ”

From the 1300s to today, our language has changed greatly. Do foreign words and neologisms enrich or impoverish the Italian language?

“There is no doubt that these words enrich Italian, just like they enrich any other language; nor do foreign words weaken our identity. Italian, the language of thousands of years of history, certainly cannot not be altered by the intrusion of hundreds of foreign words. This phenomenon of foreignisms and anglicisms in particular is not a problem of the language but rather of style and good taste: what need is there to say location in lieu of posto? Why talk about spending review when in Italian we use revisione di spesa?

Even regarding this topic, Dante had already understood everything, with extraordinary foresight. In one of the opening chapters of another great work, Convivio, Dante lashes out against some «contemptible men of Italy who praise the vernacular of others [that is, the modern languages of others] and disparage their own»: evidently, Italian intellectuals of that period already praised foreign languages like French and Provençal. «There are many» Dante writes «who think that they will be more admired by depicting things in some other language, and by praising it, than by depicting things in their own. Unquestionably the talent of learning a foreign language well is not undeserving of praise; but it is blameworthy to praise it beyond the truth in order to boast of such an acquisition.»

With some variations, we can apply these words not only yet not as much as to low-profile anglophilia in certain current sectors like information technology, entertainment and Italian fashion, as we can to those institutes where entire courses of study are in English in an Italian university system, that is in a system where renown scientists like Galileo Galilei and economists like Antonio Genovesi and many others taught. It’s thanks to those “hard” sciences where, for the first time in history, a language that was neither Latin nor least of all English, but Italian was spoken.”

We read about funding being cut for the study of Italian abroad even by Farnesina (Ministry of Foreign Affairs and International Cooperation) both in European countries like Switzerland and Germany and in the United States and Canada. Prof. Patota, in an era of globalization could investing in Italian be a way to produce wealth?

“A few years ago a minister of the Italian Republic, whose name I shall not mention both for Italy’s sake and because I don’t want to jump into the politics, responded to journalists’ questions on projected cultural funding cuts as an economic maneuver by releasing this statement: «One does not live on culture alone, I will go to the buvette (French for an eatery) and have a culture sandwich starting with the Divine Comedy.» In my opinion, instead, we can live on Italian culture, and live well. With its preserved archeological sites, its protected architectonical wonders, its great museum traditions, its valued music and theatre, some great public libraries, all these managed better could make Italy the museum and library of the world: an enormous outdoor and indoor University where visual arts, music and literature could be taught in Italian. And for this reason, investing in the teaching of Italian around the world could be – or rather, is – a way to create wealth.”

READ THIS ARTICLE IN ITALIAN