Civilisations Enter the Abyss of Disruption and Displacement

Displaced Yemeni children on their way back from school inside a camp for Internally Displaced Persons (IDPs) on the outskirts of Sana'a, Yemen, 21 February 2022 ANSA/EPA/YAHYA ARHAB

It has now come to an end – the annual assembling of Heads of State and Government, laying out on the United Nations’ threshing floor the antagonizing aspects of the reversal of global development. In addition, seeking transformative solutions to interlocking challenges.

Among the plethora of meetings over the two-week span, representatives from interested countries and organisations joined in on one specific panel discussion on Sep. 15 to highlight the exponential growth of need and create palpable solutions to the complexities many countries face.

Three ‘phenomena’ were pinpointed as the main instigators of the increasing global downward spiral – especially in ‘hot-spot’ countries, such as Somalia, Ethiopia and South Sudan, to name a few. “With food insecurity being the main driver, it interlinks forced global displacement and protection risks – each influencing the other – to increase and exacerbate other existing crises,” said Ambassador Adrian Hauri, Deputy Permanent Representative at the Permanent Mission of Switzerland. 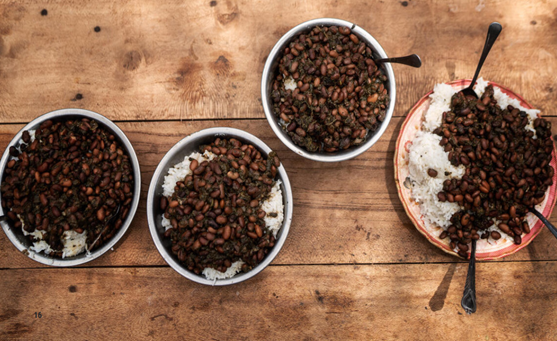 Hauri added that the rapidly rising need for humanitarian aids must be approached which should feed into the considerations of the Security Council. “It is important to step up global attention. Concrete action on the ground needs full support,” he said.

The meeting, titled The Global Food Crisis, a Global Protection Crisis: Its impact on Refugees, Internally Displaced People and Host Communities was co-hosted by the United Nations Refugee Agency (UNHCR), the World Food Programme (WFP) and the Permanent Mission of Switzerland. It called upon Member States, as well as affected countries and food security actors, to advocate for bilateral and multilateral donors’ support to the most food-insecure refugee and IDP-hosting countries.

“This act is in the spirit of burden sharing,” states Raouf Mazou, UNHCR’s Assistant High Commissioner for Operations who was also the event moderator. This is especially true in the Horn of Africa and The Sahel regions where droughts are also fanning the flames.

According to a report from The WFP, the number of people facing acute food insecurity could increase by 47 million for the remainder of 2022 – the largest escalations in the sub-Saharan Africa area. The Food and Agricultural Organisation (FAO) echoed those numbers by stating that the number of undernourished people globally could increase by about 7.6 million people in 2022. “More important than ever is necessary action on food insecurity today,” underscored Valerie Guarnieri, WFP Assistant Executive Director. 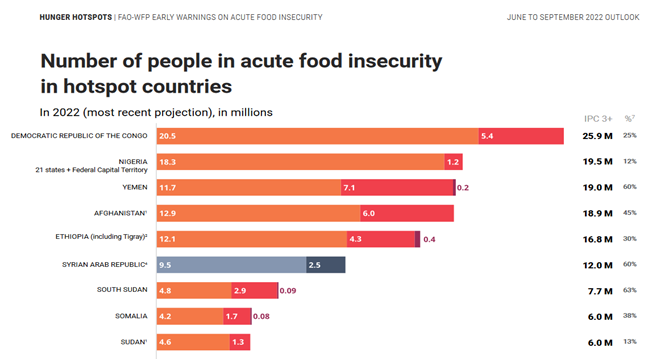 Refugees and internally displaced persons (IDPs) are among the most vulnerable to acute food insecurity and malnutrition, as they have already lost all means of subsistence. In Somalia alone, more than 1 million people have been displaced – some of them remaining within the borders and others crossing into Kenya.

In Ethiopia, the overall humanitarian situation continues to be dire – affecting more than 20 million people. Severe Acute Malnutrition (SAM) has increased nationwide by almost 6 per cent.

Ambassador Yoseph Kassaye, Deputy Permanent Representative of Ethiopia, spoke on all the negative factors affecting the entire Horn of Africa. He added that the challenge is more glaring in the case of refugees and IDPs, especially vulnerable people such as women, girls, persons with disabilities and the elderly. “It is indeed troubling to learn that the level of support by international humanitarian assistance has been declining due to the shortage of funding,” he said.

The USA representative highlighted their participation as having ‘stepped up on the financial side, saying “Since February alone we have provided USD $5.7 billion thus far toward food insecurity as well as other forms of assistance.” The US spoke on its ‘crafting up of a road map’ for global food security which has already been signed by 103 countries. “We really need to hone in on this triple-nexxus of displacement, food insecurity and protection,” she added.

Shabia Mantoo, spokesperson for the UNHCR stated that “16 months of conflict in northern Ethiopia has created a humanitarian crisis. There is a heavy need for humanitarian assistance and protection services until the end of 2022.”

Mantoo added that 87.3 per cent of children with SAM that were treated were cured, which means that most of those who access treatment recover. “This calls for the urgent scale up of nutrition response to ensure that all malnourished children have access to treatment.

Chief Executive Gwen Hines, of humanitarian aid organization, Save the Children, stated, “We all know how tight resources are. We have been calling out the hunger crisis since February.” She also highlighted the fact that, “A child dies every 48 seconds in Somalia. So how many minutes have we been in this meeting? That’s how many children have died thus far today.”

UN Secretary-General, António Guterres, expressed thoughts on whether the future will only be filled with permanent and ubiquitous chaos on this unfathomable scale. He noted that whether it is Pakistan, the Horn of Africa, the Sahel, small islands or the Least Developed Countries (LDCs) – “who are the world’s most vulnerable and who did nothing to cause this crisis – those are the people paying the horrific price for decades of intransigence by big emitters” he said.

“It is simply heartbreaking. No picture can convey the scope of this catastrophe. Devastating loss of life, enormous human suffering, and massive damage to infrastructure and livelihoods. The solidarity envisioned in the United Nations Charter is being devoured by the acids of nationalism and self-interest,” Guterres added.

Civilisations Enter the Abyss of Disruption and Displacement