In Geneva, U.N. Secretary-General delivers a plan for disarmament, but is crushed with the grim reality of U.S.-North Korea relations

Yesterday, journalists received an embargoed speech of Secretary-General António Guterres statement on disarmament, which he read this morning (EST) at the University of Geneva. The speech highlights the Secretary-General’s latest agenda on disarmament, centered around three key points. However, the speech delivered at Geneva had one noticeable shift from the original embargoed version: his statement concerning the planned meeting in Singapore between United States President Trump and Leader of the Democratic People’s Republic of Korea Kim Jong-un. 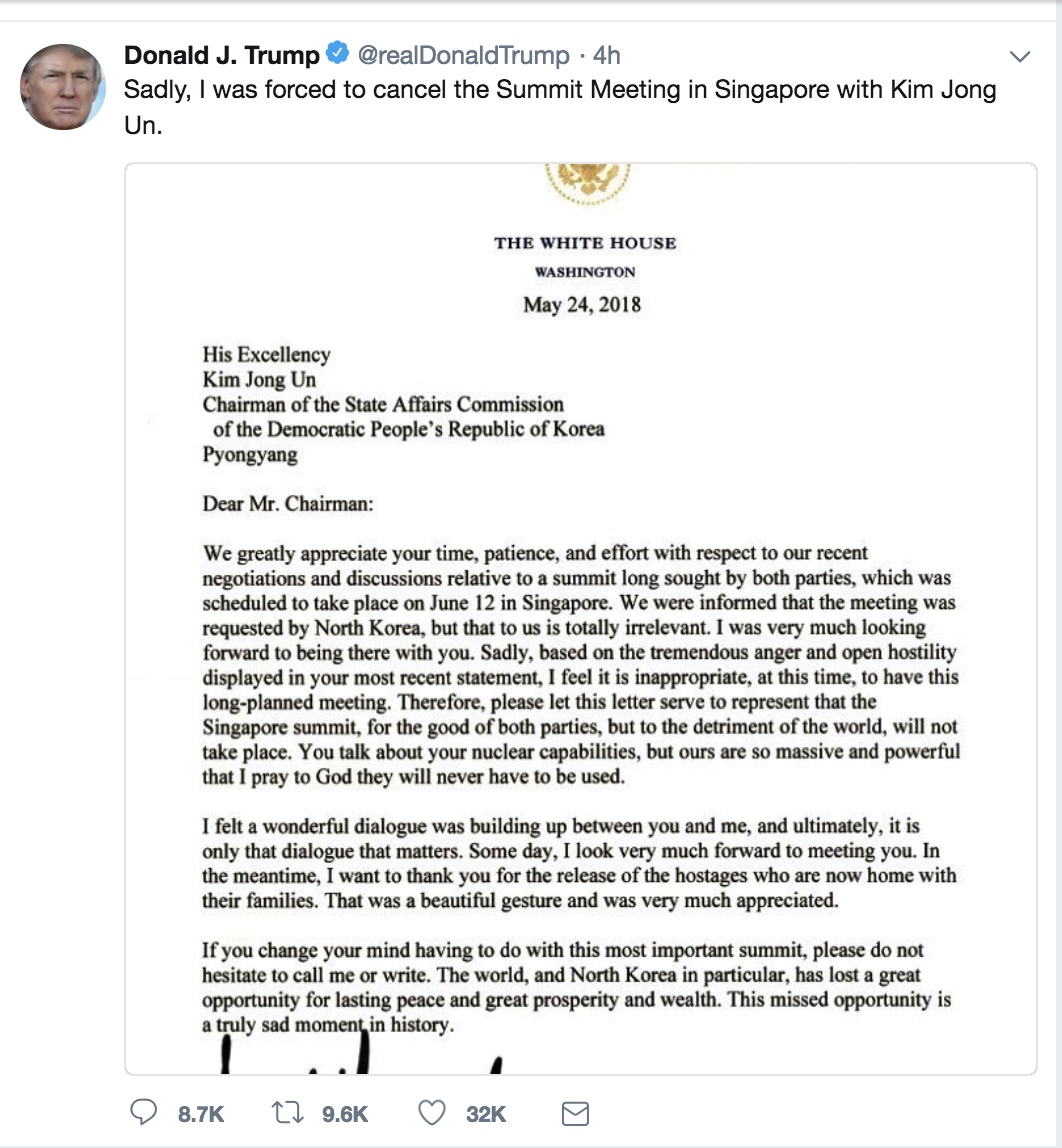 Originally, the speech was anticipated to address the Secretary-General’s strong hope that the meeting will take place, since it could have been a historic step towards the denuclearization of the Korean Peninsula. Due to President Trump’s abrupt cancellation of the meeting this morning, Guterres speech had to be last-minute adjusted to account for the Secretary-General’s newfound troubles: “I am deeply concerned by the cancellation of the planned meeting in Singapore between the President of the United States and the leader of the DPRK. I urge the parties to continue their dialogue to find the path to the peaceful and verifiable denuclearization of the Korean Peninsula.”

Guterres then continued to describe his agenda centered around the three key points, advocating for cooperation between nations in spite of recent events. The plan consisted of disarmament of weapons of mass destruction, disarmament of conventional weapons, and disarmament for future generations.

Guterres’ plan for disarmament of weapons of mass destruction consisted of nuclear, chemical, and biological specifics.

Concerning nuclear weapons, he cited different treaties limiting the proliferation of weapons, such as the Nuclear Non-Proliferation Treaty and the Treaty on the Prohibition of Nuclear Weapons. However, due to stalemates in negotiations between different nations, these agreements have been rendered more insecure as years go by. Thus, the Secretary-General placed the responsibility on nations granted access to nuclear weapons to be proactive in the disarmament of nuclear weapons worldwide.

Similarly, Guterres illustrated the need and plan for further attention towards biological weapons: “There is currently no organization or inspectorate body supporting the Biological Weapons Convention. I will therefore work with Member States to establish a core standing mechanism to conduct investigation into any alleged use of these weapons, based on the authority given to me.”

He then emphasized the need to reduce and mitigate the impact of conventional weapons. Small arms and ammunition are widely available, and civilians living in urban war zones bear the brunt from explosive weapons being used. “At the end of 2016, more than 65 million people were uprooted by war, violence, and persecution. As armed conflict has moved from open fields into cities, explosive weapons are particularly deadly for civilians. When explosive weapons are used in urban areas, some 90 percent of the casualties are civilians. This is why I will support Member States in developing appropriate limitations, common standards and operational policies on the use of these weapons in residential areas.”

After stating the need for the reduction of these weapons, the Secretary-General announced his new initiative to combat this issue: “I will dedicate resources within the Peacebuilding Fund to support government action on illicit small arms and light weapons, including collection and destruction, and the development of legal and policy frameworks.”

Lastly, he cited the need for disarmament for future generations and how this should be accomplished. Because of recent developments in technology, weapons have advanced to new heights, complicating existing legal, humanitarian, and ethical norms. Autonomous weapons create fear of humans not being in control of weapons, armed drones challenge prevailing interpretations of international law, gene editing and synthetic biology could enable new types of biological warfare, and hypersonic ballistic missiles and space-based weapons could create new threats to security while complicating nuclear disarmament. Thus, Guterres proposes: “Government can improve oversight, transparency, and accountability. All states have a responsibility to determine whether new weapons they seek would be prohibited under international law.”

The Secretary-General finished his speech by praising women for their successful and continued efforts in diplomacy while encouraging young people to do the same. “Women have a leading role to play in all our work for global peace and security. Several women have been awarded the Nobel Peace Prize for their role in achieving landmark disarmament treaties and in mobilizing global public opinion. Women must participate as decision-makers in all disarmament processes, and I am totally committed to doing all I can to support this. And you, young people, are the most important force for change in our world. I hope you will use your voices to make a difference: from giving your time and energy to causes that matter to you, to advocating and standing up for what you know is right.”

The Secretary-General’s agenda for disarmament is rooted in the thought that “excessive spending on weapons drains resources for sustainable development. It is incompatible with creating stable, inclusive societies, strong intuitions, effective governance and democracy, and a culture of respect for human rights.”

Yet, Trump’s announcement occurring shortly before the speech in Geneva left a looming shadow over Guterres, as a reminder that power does not reside in diplomatic speeches, but in the actions of those who have it.

As Monsoon Season Comes, Will the U.N. Be On Time for the Rohingya?

Migrant Deaths in Mediterranean Continue Regardless of Global Compact