And When God Spoke, They Listened: A Reflection on Loss

The United Nations Population Fund estimates that some 830 women die every day from complications related to pregnancy or childbirth.

The writer meets with young women in Niamey, Niger to hear their experiences regarding pregnancy and childbirth.

Time: 4 mins read
The desert has a way of making one realize that they are but a small part of a magnificent story.

It is both quiet and loud, dangerous and comforting.  The place where some go to do the hideous things they would never admit to, others to search for the peace they cannot find within.

Being complicated and unreliable, the desert is the only place that I have ever felt whole.  The mystery is comforting and there, I find true solace in the silence that follows.

From the bottom of a Jordanian mountain, to a well surrounded by goats in Palestine, and even a small hut atop a hill in Ethiopia where I once found a Chinese man smoking a cigarette amidst young shepherds, the desert is inescapable.

One night, while in Niamey, the capital city of Niger, I had a dream that I was sitting under an apple tree and an elderly woman was reading a story to me from a tiny little book on her lap.

She was small, mournful and aloof.

I carefully examined the wrinkled hands that clutched the edges of the book so tightly, desperate for her to speak.  With one shaky finger, the old woman would trace each sentence and whisper the words as her head bopped around incessantly, the only telling sign of the diseases that was slowly eating away at her.

I longed to touch her face, to allow it to shake in my steady hands, to look into the eyes that would not meet mine as she read from the tiny book with a sense that it was her last.

In the dream, the sky began to lose its color as a cool wind came in and the sun disappeared behind an enormous cloud, its edges barely peeking out from the sides.

The old woman looked up at the sky, sighed deeply and in a grave voice she said:

“And when God spoke, they listened.”

Without warning, it began to rain heavily, yet neither one of us was wet. The old woman looked me in the eye and I fought back the fiery tears beating at the edges of my eyes.

“And when God spoke, they listened” she said again, this time more firmly and with a soft power that made the hairs on my arms stand.

I woke up from that dream neither terrified nor sad.  It was about 4:50 am in the morning and the guest house that I staying in was as silent as the grave. My ex-boyfriend’s loose t-shirt clung to my sweaty skin as I threw starched sheets away from me, my heart beating profusely as I stumbled out of bed in search of a cigarette.

I got up, lit a candle and walked to the chair at the desk, hoping to read through my notes before the day’s interviews.

As happy as I was to be in Niger on this mission with UNFPA, the dream had manifested its effect and I was simply not the same.

Later the next day as the doctor and I traveled in the same car after concluding some interviews in a nearby village, my strange dream was all I could think about. 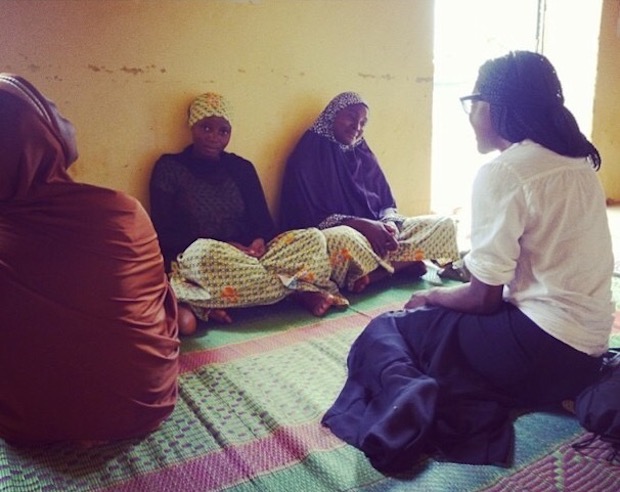 There in the desert, looking at the sun disappear once again, I was alone.

There’s nowhere to run and nowhere to hide, you’re exposed yet you cannot see who is watching. On top of that, the silence is so loud and you feel so small that you inevitably realize your insignificance in the world.

Whether you believe in a high power or not, I think that sometimes if you really listen, he or she does in fact speak – only that you should try listening with your eyes and not your ears.

Sometimes, even your heart.

Loss is not something unfamiliar to those in the countries I visited, especially in Niger.  Loss is an often everyday occurrence with its difficult feelings, unreliable outbursts and harrowing birthmarks.

Loss is as uncontrollable as the desert.

A day after my dream, I was seated on a step outside a bare maternity ward watching as young children played on the ground, laughing hysterically with not a care in the world.  Beyond the children, I watched as a young woman, physically heavy, was being led by two women at her side.

Looking at her face, one could not tell the excruciating pain that she felt, yet her limp body spoke volumes.

A midwife rushed past me in her direction, asking frantic questions in the local dialect and screaming at a colleague to prepare a room.  The woman had lost her child and had been bleeding profusely for hours.  She and her friends had walked miles just to arrive at the UNFPA sponsored clinic to get some help.

I felt awkward and out of place now standing in a small corridor as people rushed about to try and assist.  It was weird standing in that room – the orange and white UNFPA posters everywhere, open cases of medication and flies.  The heat was unbearable, and for a moment I thought I would faint, just looking as the woman lay motionless on the cold operating table.

I asked a nurse if I could step outside, fearful of what might take place next.

As I walked out onto the veranda, I couldn’t help but look at the trail of blood that led back into the clinic.  It was a footnote at the end of an often tragic story, a note on a particular kind of loss I knew all too well.

Amidst the silence of the desert, it remained a footnote on the fragility of life.

And so I listened.

Joan Erakit is an American writer and Essayist. Her work has been published by OkayAfrica, InDepthNews, The World Post, Cool Hunting and Marie Claire. She has written two books and is currently working on a memoir. She lives in Italy.

Cantina Bossanova: Reinventing What it Means to be a Vigneron in Abruzzo

“Made in Italy in the 21st Century”: la moda è una cosa seria

“Made in Italy in the 21st Century”: la moda è una cosa seria