It’s a well-known fact that in Rome historical landmarks are everywhere — and now even in the basement of a department store.

Luxury travel advisor Mitra Talarman explained in an Instagram video that “Rome is a lasagna. We build layer on layer so we have to build around our ancient city”. She also showed us of one of the city’s coolest attractions: a Roman aqueduct in the basement of the high-end shopping center, La Rinascente.

In the video, Talarman walks us through the department store, down its escalator and into its basement, where– voilà—we see the still-functioning aqueduct. “This is still the main aqueduct that still pumps water from the Spanish Steps to the Vatican City and you can come and visit for free,” she said.

As a portion of the famed Aqua Virgo aqueduct, according to La Rinascente’s website, the piece of history is from 19 B.C. and is in a space of the shopping center “dedicated to events, exhibitions and design.”

During renovations of the antique palazzo that would eventually become the new Rinascente store, builders discovered an almost 2,000-year-old section of the Aqua Virgo, one of 11 aqueducts that supplied ancient Rome. 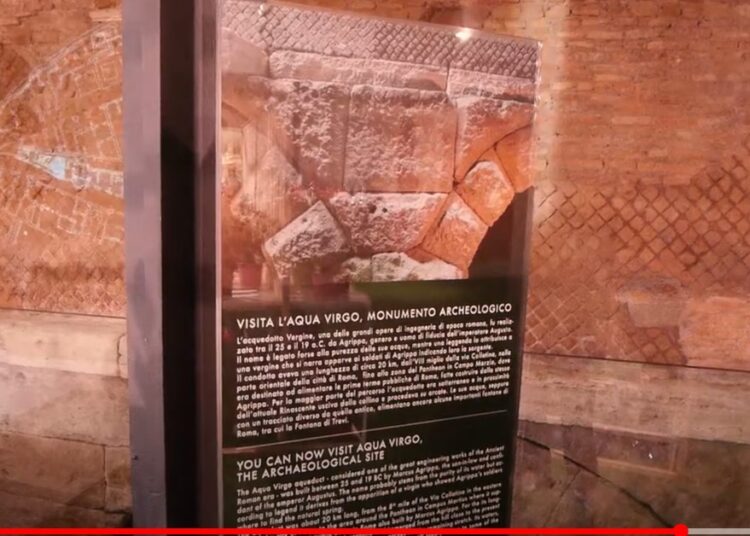 Completed in 19 BC during the reign of Augustus, the Aqua Virgo was one of the architectural projects of Marcus Agrippa, who was also responsible for the original Pantheon and the Saepta Julia, as well as a number of baths, porticoes and gardens across Rome.

Currently Talarman’s video has over 10,000 likes, and plenty of comments of viewers learning something new about the city.

The new La Rinascente flagship store is about a 3-minute walk from the Trevi Fountain. Thanks to some 15th-century renovations, Agrippa’s pipeline continues to transport fresh water over 20km from its source outside Rome. The route passes under Villa Borghese and Piazza di Spagna before supplying the Trevi Fountain with its reported daily dose of 80.000 cubic meters of water.

On La Rinascente’s basement floor, shoppers can view a 60-meter stretch of the ancient aqueduct. As well as informative videos and light projections that tell the story of the Aqua Virgo, the exhibition floor also includes a coffee shop for a fully caffeinated archeological experience.

Ever Heard of the Beautiful PINK Waters of the Pacific Ocean? Now You Have