Traveling in Tanzania, Africa, and the Scariest “Bus Ride” of My Life

Even getting the best seat in the death trap Toyota SUV did nothing to reassure me—on the contrary!

I recently mentioned in a previous article that I once took the scariest bus ride of my life, a “story for another time” as I put it.  But I think that time is now.  I had almost put my experience with Kimbola in the back of my mind until I wrote last week’s article.  I don’t know how I could ever forget it.

I was in Arusha, Tanzania.  It is the city from which most safaris to the Serengeti start.  In the distance looms the impressive Mt. Kilimanjaro, with its snows receding like an aging hairline.  I had just returned from a four-day safari myself and had another four or so days to explore.  Earlier in my trip, further north on the Kenyan island of Lamu, I had met a medical student who was taking a quick vacation before he started to work as an intern in a hospital with a missionary priest deep in Maasai country.  He invited me to join and having no immediate plans, I decided to scope it out.  After having bought some minutes for my tiny, jail-broken cell phone, I called him.  The priest, through the crackling of bad reception, explained to me where I could buy my bus ticket.

I wandered in the general direction until I was sure that I was lost.  I called him back and passed the phone to a local store owner who was curiously standing outside of his shop, watching a clearly lost tourist.  As it turned out, the “bus station” was right behind me.  It was a corner like any other.  Some packages lay out front, but nothing about it said it was a bus station.

And then there was the matter of when the bus would leave.  The priest on the phone had said it left at 2 PM, but the man working at the station said, through broken English, many hand gestures, and a translator, that it left at 8.  We went back and forth for a while until I just decided to show up at 8 and see what would happen.  It wasn’t until later that I remembered something I had overheard earlier on my trip.  In many Swahili speaking countries, what we call 7 AM is what they call 1 AM since it is one hour after sunrise.  I convinced myself that this must have been what the confusion was all about, after all, by that logic 2 o’clock in the afternoon was, in fact, now 8 o’clock.

The next morning, I hauled my bag, now filthier than ever from a long few weeks of travel, to the bus station.  I didn’t see a bus but this didn’t bother me.  I figured it was on its way.  I sat down in the bus station waiting for someone to tell me what to do.  Not too long after the employee I had met the day before came over and walked me over to the bus.  It was actually a Toyota SUV and in it were sitting far more people than a Toyota SUV should really hold.  Most of them were sitting on their luggage or cadaver sized bags of rice.

Before I hopped in, I was greeted by the driver, Kimbola.  He would have been a dead ringer for Mike Tyson, if Tyson weighed 140 lbs.  He donned a stoic look as he shook my hand and walked me over to my seat, right in the front.  It was clear that they had saved this seat for me.  I tried to explain that I was fine with sitting in the back with everyone else, but everyone, Kimbola and the passengers, agreed that I was to sit in the front.  I was hesitant, however.  The front seat of these cars is often referred to as the “death seats” since the seatbelts never work and there is certainly no air bag to protect you.  But it was clear that this seat was saved for me and that I was to be thankful for it, so I was and I sat quietly.

After two more women sat next to me–between me and Kimbola–we were ready to go.  The front seat was not a bench, so these women sat partially in my seat and partially on the arm rest.  Kimbola had to reach around one of the women to shift gears, an auspicious placement that I wasn’t sure whether it was on purpose or not. 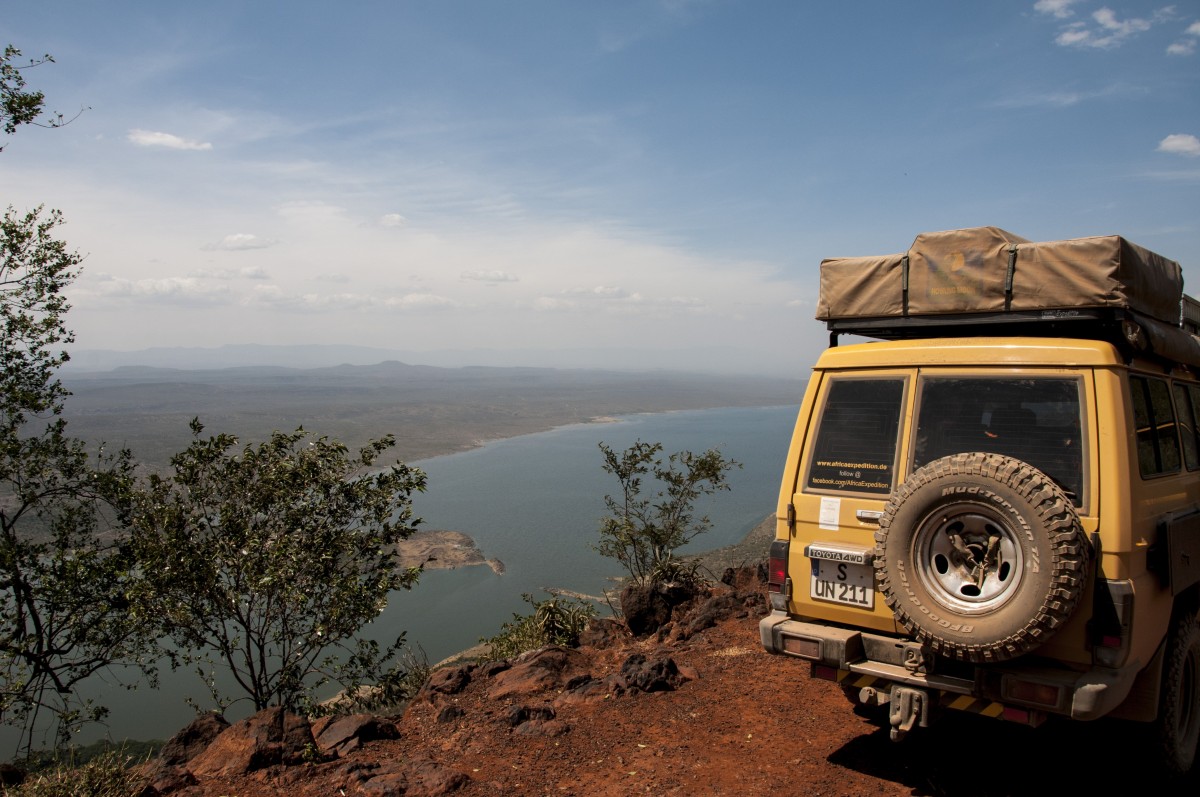 I had gone through this before.  Most travelers to developing countries who opt for the cheaper, more local buses, often call these types of bus rides “chicken buses.”  This is because it is all too common that one might have to sit on someone else’s lap, and on their lap might be a child, or a chicken.  On one ride I once took in Peru the bag of the woman sitting next to me started trying to run off.  Inside was a chicken which she quickly knocked out cold, before going back to sleep herself.  These buses often start with too many people inside, none of whom wear a seat belt, and continue to stop and pick more people up along the way.  Complete strangers may be sitting on each other’s lap—just as if it were the seat.

Nothing in Kimbola’s Toyota worked.  The steering wheel was upside down, none of the gauges worked, the windshield was cracked and the car had to be push-started.  I looked for a seat belt, but found nothing.  When he stopped for gas it took me a while to realize that he never turned the car off.  He also managed to change the oil — again, with the car on.  Kimbola stopped to buy some popcorn for the road and a few loaves of sliced bread.  There was literally no room inside for the bread, so he tied the bags to the windshield wipers, which I just assumed didn’t work anyway.

For about an hour we drove down a fairly smooth two-lane road.  Kimbola used his right hand to feed himself popcorn and occasionally hold on to the steering wheel while his left hand changed gears while wrapped around the woman sitting next to him in a move I might have tried to pull off in high school.

I was relieved when we were pulled over by a police officer.  I had hoped that somehow he would do something to ensure our safety.  When the officer walked back to his car for a moment, however, Kimbola said something in Swahili to the passengers.  He clearly asked everyone to chip in for a bribe.  I offered some cash, but everyone insisted on treating me.  Kimbola ran to the officer’s car, sprinted back, and we continued our harrowing journey.

The silver lining was that we were on a smooth road.  That was, however, until Kimbola made a sudden sharp left turn off the road.  The rest of our journey was spent crossing the plains, weaving around low lying bushes and trying to avoid deep ditches.  The car bumped and rattled like this for hours as we passed through the beautiful African plains.   Aside from the occasional Maasai herder there were rarely any signs of people.  How he knew when to turn and where to go was a mystery to me.  There was absolutely no road.

By sunset we arrived in a small, spread out village.  Kimbola dropped people off by their homes as they were greeted by smiling relatives.  It was clear that not only was he the bus driver, he was also the delivery man, dropping off the bags of rice and other groceries at a local store.  When we arrived at the hospital, a small one story, four room building and a house, Kimbola himself took my bag off the roof and escorted me to the house, something he didn’t do for anyone else.

That night, under the bright stars of the dark African night sky my friend, the priest, and I talked over some beers.  The priest laughed at how terrified I had been in Kimbola’s car.  He told us how he had his own SUV which served as an ambulance.  He once took four men who had been attacked by a lion to the hospital in Arusha using the same four-hour route.  Another time a woman gave birth in breech while lying down in the back as he drove.  He explained that I was treated so well by Kimbola and the passengers because they all knew I was going to the only hospital in the area.

A few days later I stood outside the hospital waiting for Kimbola to come take me back to Arusha and I wasn’t sure if knowing what was to come was worse or better than when it surprised me the first time.

Mike Lepetit is a teacher and coach in the Bronx who spends much of his free time traveling to destinations both close to home and far away. He has traveled to 28 countries and 27 states. While he has a hard time picking, his favorite country to travel to is Vietnam. On top of his list of places to visit next are Colombia, Argentina, Botswana, Croatia, and the Philippines. He lives in Westchester with his wife and dog. See more of his travels at mikelepetitphotography.com

The Via Francigena from Lucca to Siena: A Pilgrimage That is Not Just for the Religious

Visited 9 Countries in 7 Days? Take This Quiz to See If You’ve Really Been There

After Branson’s Flight to Space, I’m Imagining a Vacation in the “Space Hotel”