Photographing moody skies, lonely streets or bakers opening shops, in early morning or late night and you’ll miss some sleep, but the rewards are worth it

After each trip, I invariably get asked the same question, usually framed the same way: “wow, these pictures are great, what kind of camera do you use?”  And each time I hear it it pains me a little more.  I get why they are asking it.  I come back with pictures that would be hard to take on an iPhone like the clear night sky.

But to attribute 100 percent of a picture to my camera is to ignore everything else that goes into it.  Anyone who’s ever traveled with me knows that at any given moment I am carrying a few thousand dollars and nearly fifty pounds of equipment and spending hours planning and taking pictures, not to mention the hours I spend at my computer touching them up on Adobe Lightroom.  Is all that equipment always necessary?  Probably not, but I don’t mind.  Photography was, after all, the reason I started traveling.  It was a hobby that my father gave me and he taught me to travel with an eye for the next great picture.  While a good camera does help, here are some tips that everyone could use on their future vacation to come home with next level pictures.

People always ask me what camera they should get, and it’s a loaded question.  Getting a DSLR (those cameras with the interchangeable lenses) won’t necessarily ensure that you are taking any better pictures.  In fact, on its own manual setting, a DSLR takes pictures about as good as an iPhone, if not sometimes worse.  This is primarily due to the fact that on its manual setting the camera will just try to give you an evenly balanced picture and will do so at any cost, which sometimes results in there being some motion blur or other problems.

There are also two main types of DSLR cameras, DX and FX, the main difference being the size of the sensor inside the camera.  FX cameras can take larger pictures and do better in low light, but they are usually much more expensive.  I like to take a lot of pictures of the night sky and my FX camera comes in handy.  It also requires a tripod and a few other things which makes it difficult to carry around all the time.

Ultimately, I tell people that unless they are ready to dedicate some time and money, they should just get a new phone.  The pictures that you can take with it are incredible now and professional photographers often take pictures with their phones.  I also recommend that people get a GoPro.  They’re small, light, and you can do so much with them.  They can take both great quality videos and pictures, they can go underwater, take wide angle pictures, pictures of the night sky, and time lapse videos.  You can even pull a frame off a video and keep it as a photo.  It’s a great investment.

Be A Morning Person

Being a good photographer means that you don’t get much sleep.  While I’m no morning person, I do try my best to wake up early and go for walks just as a place is opening up.  This is when jetlag is your friend.  The lighting tends to be great in the morning but also you can get a real intimate look at a place.  Lonely streets, bakers opening shops, light bouncing off an old church, you’ll see things that later in the day you will be too busy to notice.  When I traveled to the Greek island of Rhodes with my wife, I woke up each morning at sunrise and wandered.  I came across playful street cats, an early morning swim club, fishermen fixing their nets, and light bouncing through the ruins of an old church.  It was a great experience that left me with some great pictures.  When I got back, my wife was still asleep and I was able to take a nap before our day’s adventures.

Be A Night Person

Waking up early is hard, especially if you go to bed late, which is sometimes what it takes.  Wander around a city at night and you may stumble on street carnivals, parties, or moody street lighting.  Below Macchu Picchu is the city of Auguascalientes.  It’s filled with tourists who go to bed early in order to make the trek up to the ruins that lie above them.  But I went for a walk the night before my trek and wandered into a carnival filled with local dance groups and marching bands celebrating their patron saint’s holy day.  We were the only tourists around and the locals welcomed us with free drinks, food, and an up-close look at their dance routines, all of which I was able to capture with my camera. 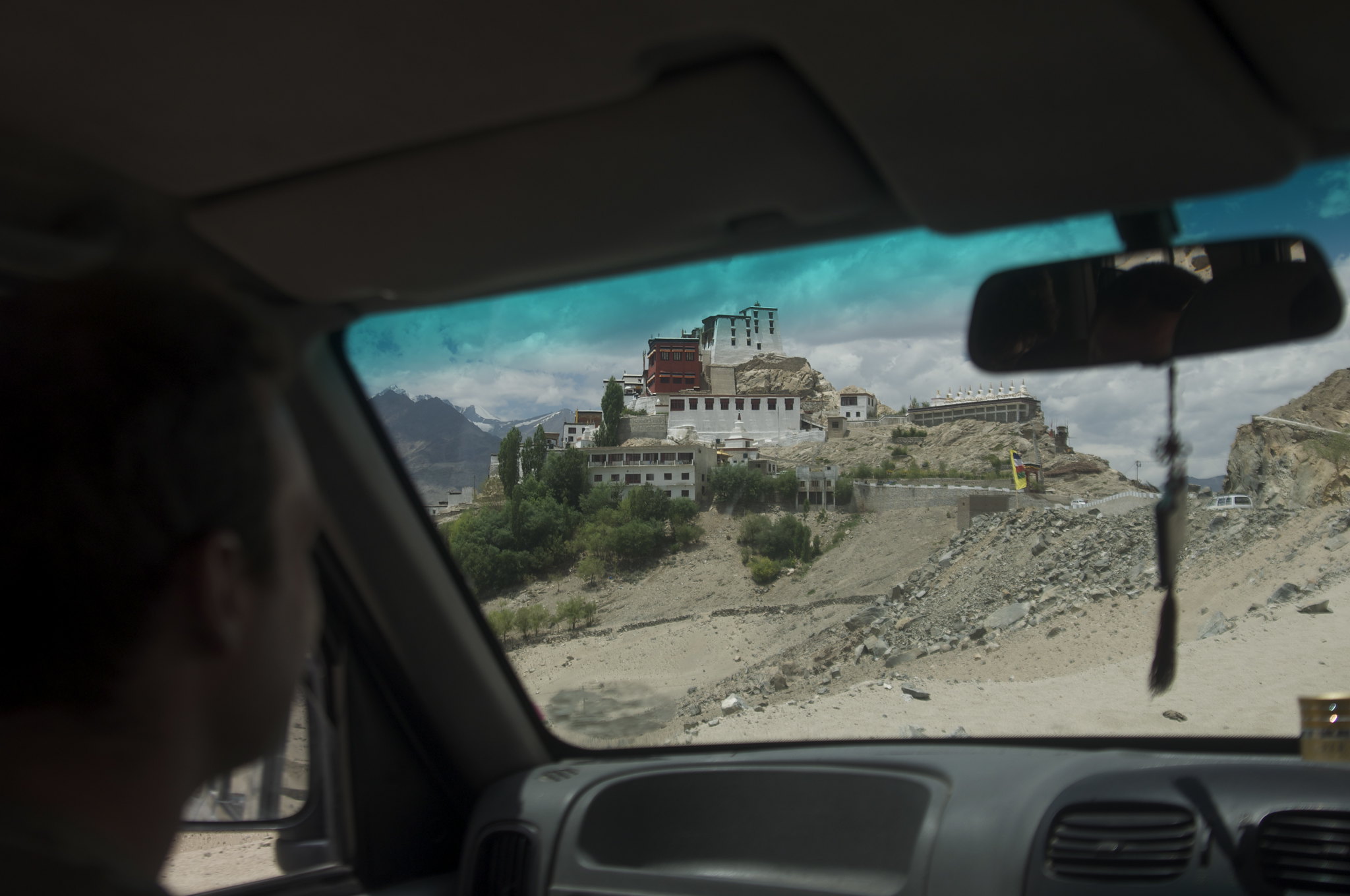 One thing I feel strongly about is that there is a lot to say about the experience of being a traveler, and documenting those experiences is important.  On that same Macchu Piccu trip, I once watched someone in a bus try to take a picture of the mountains through the bus window.  He tried painstakingly to avoid any smudges on the window or any glare.  Personally, though, I felt that a better picture would have been the mountains framed by the bus window with all the tourists staring in awe.  It told a better story and really captured the experience of being on the bus as a tourist.

Whenever I am in a museum, I like to take pictures of people looking at art.  I try to avoid taking pictures of their faces since they often can’t consent.  But people looking at art can be much more interesting than the art itself.  One missed photograph I think about a lot was from the Metropolitan Museum of Art In New York City.  In the hall of Greek and Roman sculptures stood the imposing figure of Hercules, as strong and brave as ever and surrounding him was a group of awestruck men.  They huddled around him as if they were at a bar, listening to old stories over a few beers.  I didn’t have my camera on me and this predated smart phones, but I would have loved to document these men jealous of Hercules’s strength.

Take A Lot of Pictures

My camera is always set to take several pictures rapidly.  I would never want to take a great split-second picture only to realize that someone’s eyes were closed, or that the same picture would have been better one second later, so I always take several at a time.  Overall, I try to have one good picture a day, even if I took 500 that day.  Some days will be better than others, but take a lot of pictures and you’re bound to have a few you are proud of.

While some pictures will just jump out in front of you, others will require some planning.  When I want a good picture of the stars, for instance, I first look for a few things.

While I might be in a place dark enough to actually see the stars, I check to see if the night will be cloudy or clear as well as when the moon will be out as it can eat up much of the dark night sky.

Then I look for a spot that will give me something interesting in the foreground but still give me enough sky to see the milky way.  Look up where the best views are in advance and scope them out early.

I often look up the weather before I take a picture; I love a good dramatic cloudy sky.  You may even need to return to a spot several times in a trip before it’s just right.  There are some pictures of places near me that I’ve taken several times over the course of years. The season, weather, and time of day can all reveal something new about it.

Remember that photography is about preserving and documenting, not altering to meet your needs.  Respect people’s space and keep in mind that some people and cultures do not like to have their pictures taken.  Ask permission, respect boundaries, and tread lightly.  Some places and events are better remembered in your heart than in your camera.

Mike Lepetit is a teacher and coach in the Bronx who spends much of his free time traveling to destinations both close to home and far away. He has traveled to 28 countries and 27 states. While he has a hard time picking, his favorite country to travel to is Vietnam. On top of his list of places to visit next are Colombia, Argentina, Botswana, Croatia, and the Philippines. He lives in Westchester with his wife and dog. See more of his travels at mikelepetitphotography.com

The Via Francigena from Lucca to Siena: A Pilgrimage That is Not Just for the Religious

Visited 9 Countries in 7 Days? Take This Quiz to See If You’ve Really Been There

After Branson’s Flight to Space, I’m Imagining a Vacation in the “Space Hotel”