In the heart of Western Sicily, lays a ghost-town that managed to survive its darkest hour, defying the elements and people’s indifference while miraculously remaining standing. In a passionate struggle against time and neglect the small baroque center, rich of art and history but forgotten until yesterday and desecrated, is starting to see new life forty eight years after the earthquake that destroyed most of it.

Each new day could be the last for the wounded buildings of ancient Poggioreale whose many artistic sites were left unattended for almost half a century since January 15th 1968, a date that marked the destiny of the little towns of the Valle del Belice, such as neighboring Salaparuta and Gibellina, all reduced to rubble in a cold winter day.

“Although Poggioreale, in its whole didn’t suffer irreparable damages, its inhabitants were nevertheless asked to leave their homes – says native Giacinto Musso – In the aftermath of this exodus, several structures, among them many historical buildings, were demolished with dynamite in order to make place for temporary emergency housing. The Italian government offered to purchase one-way tickets to America or Australia for many of the citizens who chose to leave permanently. Now, a group of us wants to give a contribution for a cultural and economic renaissance of this little gem”. Giacinto’s words conceal a modicum of bitter sadness but also a cautious optimism. He is the president of the association Poggioreale Antica (Ancient Poggioreale), and my guide to an exclusive tour through the streets of this old rural town, one of the centers rebuilt elsewhere after the earthquake and made up of new housing units doomed from the beginning by a loss of identity followed almost immediately by an exodus of their inhabitants that left them deserted. 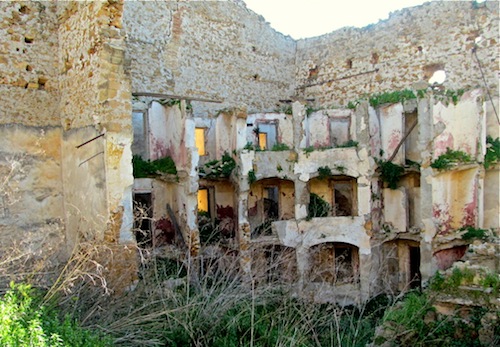 The ancient town of Poggioreale was founded in 1642 thanks to a land grant by King Philip IV of Spain to the Marquis of Gibellina Francesco Morso. Walking through the ruined streets creates the impression that time has frozen. The mark of the Spanish house of Aragona is clearly visible in the stately mansions and in the seven churches adorning the town laying in the shadow of Mount Castellazzo, where archeological excavations have revealed the remains of an indigenous settlement dating back to the Iron Age and traditionally identified with the city of Elima.

“Mount Castellazzo is situated in a strategic position used to overlook an important land and fluvial thoroughfare – explains Mr. Musso – as well as the town of Poggioreale, a rural center that expanded quickly due to the demand for labor from the surrounding feudal estates.

A developer by trade, Giacinto Musso is among the group of volunteers who have dedicated their time and effort to the upkeep and protection of the remains of Poggioreale. After spending twenty years in the North of Italy, Giacinto came back to his hometown, hardly recognizing its features: large swaths of vegetation had swallowed the buildngs and mud and grass were covering the streets.

“The main street was inaccessible, sidewalks were impassable so, I started to clean up – he tells me – After two weeks, the group grew to five or six of us lending a hand on Sunday morning. In the middle of 2011 we created the association, even if we knew we were violating the ordinance forbidding access to ancient Poggioreale”.

Indeed, at the entrance of the town, it is impossible not to notice the information plaque which “severely forbids the access and transit”. The municipal administration’s ban is recent while the sliding lock to the main gate remained open for years: almost an invitation to trespass and violate what remained of a town center stripped of its treasures (statues, majolica tiles, furnishing even capitals and balconies) and damaged by shepherds who used its buildings as shelter for their herds of sheep. In spite of the plaque, curious visitors easily bypass the main entrance finding ways to enter and experience the enchanted atmosphere of the ghost town while taking their chances with the danger of falling ruins.

Entering Umberto I boulevard, it is possible to admire what remains of the Theater of the Princes, already functional in the Eighteenth Century, as well as the palace of the Tamburello family, maybe one of the best preserved frescoed buildings in Poggioreale. Vandalized throughout the years, the building housed the post office on the ground floor, as shown in the remaining decorations of the ceiling, among which stands out an image of Guglielmo Marconi’s telegraph. 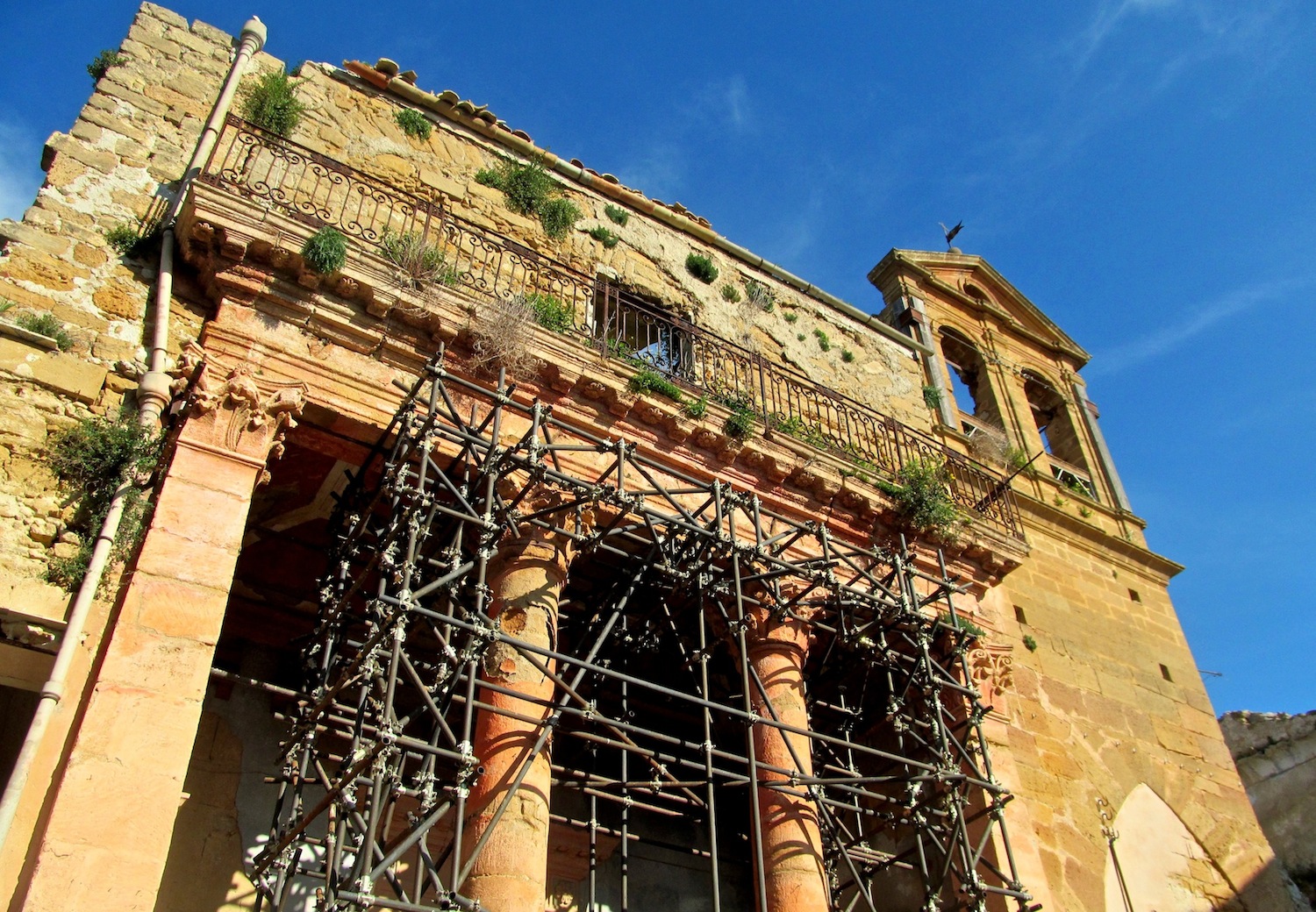 The crown jewel of the main street is the enchanting church of Sant’Antonio of Padua, with its majestic columns and bright colors which give the ruin an unaltered appeal in spite of the raiding of its marble objects.

The invaluable work of the association, which is funded by the donation of tourists longing for lost stories, has received the praise of the Sant’Antonio Committee in Australia founded by a group of emigres originally from the Belice area that expressed the desire to direct some funds to the reconstruction of religious buildings of significant value: the sanctuary dedicated to the saint patron, already secured in the last decade, could be among the selected ones.

“One of our goals – explains Mr. Musso – is to meet our fellow citizens living abroad, particularly the sizable communities in Australia and in the United States, in Louisiana, to invite back the sons, the grandchildren and all descendants of those who emigrated, in order to learn their stories and to give them the opportunity to visit their grandfathers’ hometown”.

Thanks to the on-going commitment of the association, today there is growing attention from politicians as well, conspicuously absent during the years of looting and decay. “The approval for for the safekeeping projects of Corso Umberto I and Elimo square, will be financed by European Union funds. While the main priority remains stopping the collapsing of the buildings the long-term goal shared by both the current and previous municipal administrations is to let Poggioreale become an open-air museum accessible by tourists”.

Even just a glance over the spectacular Elimo square, is enough to notice how neglect has disfigured one the most evocative places of Poggioreale’s past life in spite of the fact that the square itself was chosen by filmmaker Giuseppe Tornatore as a set for some of his movies such as “Malena” and “L’Uomo delle Stelle” and, more recently, by the band Marta sui Tubi for a videoclip. Five years ago the bell tower of the main church fell down. It had become one of the symbols of the Belice, after the earthquake of 1968. The old city-hall building and many private houses are crumbling as well because of humidity or wind, with each gust carrying the potential for further destruction. Saving whatever can be salvaged becomes, then, a race against time.

Thanks to the work of volunteers who take tourists through the town with an eye on safety, it is now possible to push through side streets once blocked by vegetation and to catch a glimpse of sites that had remained hidden for year. It is also possible to explore other places of interest such as the hanging garden of the Morso-Naselli family or the ancient church of Gesù e Maria, with its catacombs, once adorned by a majestic baroque portal and severely damaged by the elements.

Through the tales of the town at the peak of its splendor, it becomes easy to project oneself behind the centuries, imagining streets crossed by royal carriages in a town abuzz with life where also warehouses, old workshops, fish shops of, abandoned olive oil mills, are still visible. The financial contribution of the European Union, allowed the restoration of other monuments such as the old aqueduct, the Cannoli Fountain and the “washtub of the mules” (“il lavatoio dei muli”), evidence of the importance of animals in rural life and of the thrifty use of water in Sicily.

Culture is economics, according to Giacinto Musso, who mentions another project proposed to the municipal administration, for the preservation of the memory of the Belìce area: “Agosta Palace, an historic building, will be restored and function as a museum and information center for tourists. During these years – he concludes – we have been going around collecting whatever we found. Now it is time to show it to the visitors. Unfortunately the most important things are long gone: from shelves carved in tuff rock to barrels for the storage of wine”. 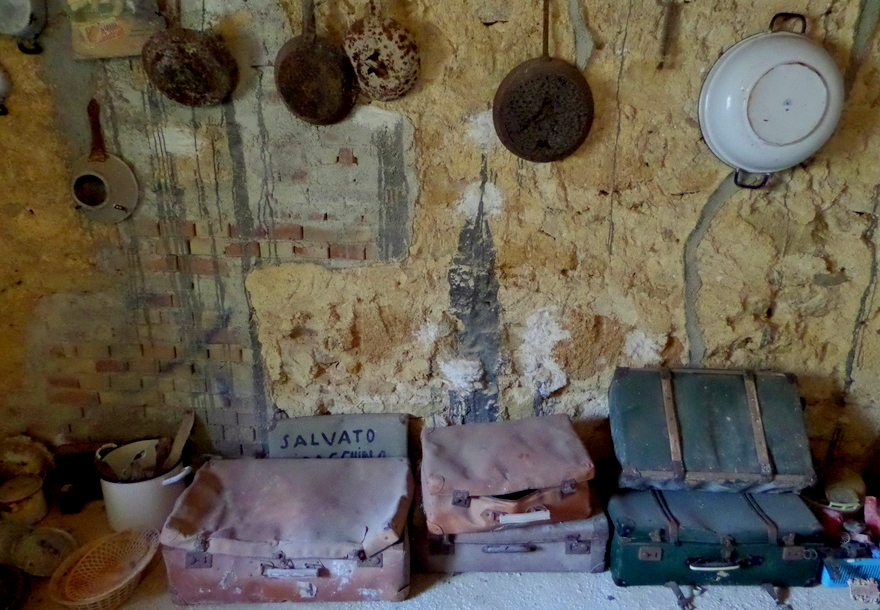 Ancient toys and utensils, agricultural tools and carton suitcases used by migrants for their journeys to new continents, are among the items left to tell the story of life before the earthquake, equally precious fragments for the reconstruction of the historic memory further enhanced by pictures and pieces of furniture donated by the old inhabitants.

They remain the strongest defenders of a time that no longer exists, of an heritage stolen away from Poggioreale by looting, illegal development and neglect. As defenders of beauty, they are scattering the ancient center of town with little signs of its awakening: a little Christmas tree in the main square, vases of geraniums and clothes left to hang from balconies, as symbols of the presence of the people chased away from their homes, but whose spirit, apparently, has never left their hometown.