The Sensational Kidnapping in Cuba of Fangio, the Famous Formula 1 Race Driver

My return to Havana in a Maserati, to trace the route of the famous kidnapping in 1958 that announced the Castro revolution and made Fangio smile

The Cuban dream runs aboard a Maserati Gran Cabrio, one of the most iconic cars from the Modena Trident manufacturer, which today allows me t­o tell the story of Juan Manuel Fangio, the five-time Formula 1 Argentine world champion who, in addition to his victory, is also remembered for his abduction in Havana at the hands of the “26th of July Revolutionary Movement”, better known as Los Barbudos. An event bound to become the unbreakable bond between former president Batista, the historical Maserati brand, and Cuba.

The new Maserati Gran Cabrio shipped to Havana harbor, marks a symbolic return to Cuba, after 50 years since the last Grand Prix. Thanks to the “Amigos de Fangio Association”, which helped me arrange interviews with the only two survivors of the legendary revolutionary group, I was able to back trace the great race driver’s tumultuous 29 hours.

Born in 1911 to an Italian family of immigrants in Argentina, Juan Manuel Fangio joined the sophisticated world of Formula 1 at the age of 37.

On February 23rd, 1958 he was invited to join the Grand Prix of Cuba by former president Fulgencio Batista, who in this way hoped to regain his popularity during the worst crisis of his administration. Fangio and Stirling Moss landed on the Caribbean island with a fleet of Maserati 300’s to race against 19 drivers from 11 countries, against the major Formula-1 builders/manufacturers of the time.

Just before the green flag was dropped,  on February 22,1958 at  8:55 pm, the rebels carried out their plan. After breaking into the lobby of the luxurious Lincoln Hotel, they threatened Fangio with a 45 caliber gun, forced him to get into a black Plymouth and sped away, giving rise to “The kidnapping of the century” and shifting the world’s focus onto Castro’s cause to the detriment of Batista’s dictatorship.

Getaway driver Manuel Núñez and Ángel Fernández Vila still remember how Fangio, unlike the rest of them, managed to stay cool. He even smiled when the barrel of the revolver was aimed at his back.

In the middle of the operation, after passing a dangerous military checkpoint, Núñez decided to take a risk stopping at home to introduce the hostage to his family and friends, celebrating the success of the mission,  before reaching the hidden locations.

During the abduction’s final hours, the group intercepted over the radio Batista’s instructions to kill everybody, including Fangio, in case of capture, so that the blame could be shifted to Castro’s supporters.

In the 27 hours as hostage Fangio was never blindfolded or mistreated. He understood the ideological reasons that led the revolutionary group to risk their lives for their cause. Once released at the gates of the Argentine Embassy, he even introduced his kidnappers to the military guards, as “my kind and friendly kidnappers”. Before the goodbyes, the revolutionary group replied by saying, “When the revolution triumphs, you will be our guest of honor.” 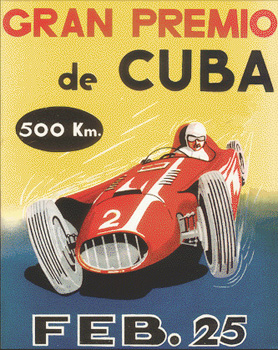 Besides Fangio’s kidnapping, the Grand Prix of that year was suspended when young local driver Armando Garcia Cifuentes lost control of his Ferrari 500TR and swooped into the crowd, killing seven people and injuring over thirty more. The race ended with the victory of Stirling Moss and Masten Gregory.

Afterwards, Batista’s government was overthrown during the Cuban revolution of 1959. In the same year and at the peak of his career, Fangio headed towards retirement, feeling the weight of his age looming.

The kidnappers will be remembered as heroes by the Cuban people. The link between Maserati, the island of Cuba and the Argentine car race driver has since then entered the history of motors.

The Sensational Kidnapping in Cuba of Fangio, the Famous Formula 1 Race Driver

Coast to coast in Maserati: tappa a Chicago