Italian economist who also had a great impact on political science, Alesina was instrumental in putting the Bocconi school of business on the global map

Italian Harvard Economist Alberto Alesina died of a heart attack. He was in an excursion on a Mountain with his wife Susan, when he suddenly died. The first news was given two days ago by his colleague and friend David Wessel. 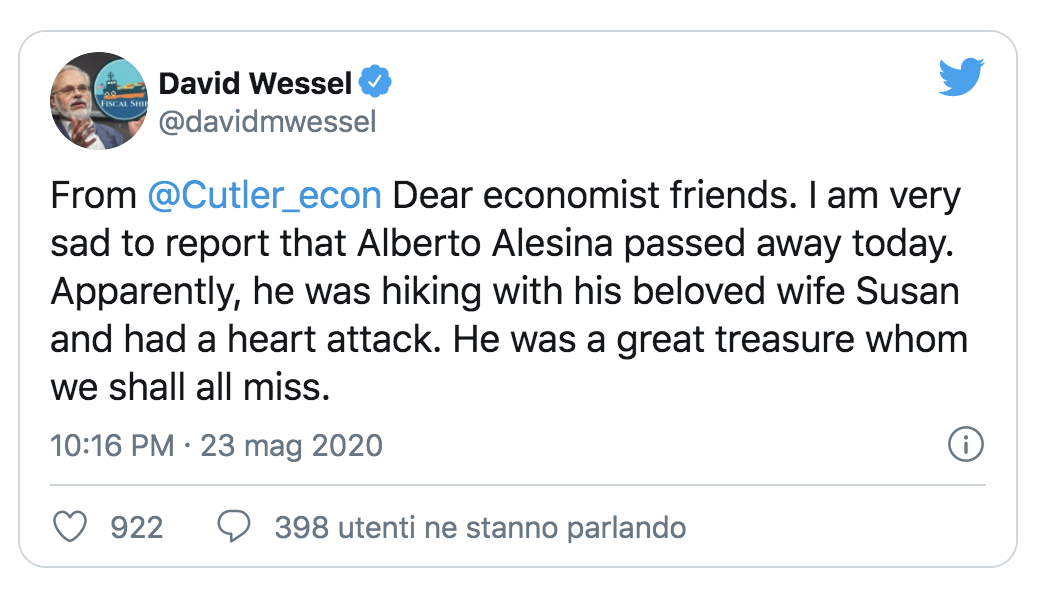 Alberto Alesina was an enormous presence to be sure, in economics, but he was also widely read and made an enormous difference in political science as well.  He was among those economists (I think of Keynes, of Tobin, of Hirschman and of my colleague, Nordhaus) who had a keen understanding of the political process and therefore wrote brilliantly in ways that shaped the way in which we think, for example, of economic inequality and what we can and perhaps must do about that.

Alesina also became famous because he, and some of his co-authors, have compelled us to think differently about policies of austerity.  But there was never any doubt as to where Alberto stood on many of these issues.  More important, his work at Harvard also helped to put the Bocconi University on the map as a serious and indeed major business school. He perhaps, more than any others from that important academic institution, gave the Bocconi an international place of honor regarding the training of economists.

Alesina was the Harvard’s Nathaniel Ropes Professor of Political Economy, and was affiliated with the National Bureau of Economic Research and the Centre for Economic Policy Research. Just recently, Harvard had announced that Alesina, along with Carlo Favero, and Francesco Giavazzi, had won the Manhattan Institute’s Hayek Book Prize for their work Austerity: When It Works and When It Doesn’t.

It is for all of us a terrible loss that a scholar of such a really young age should be leaving us.

Alberto Alesina, in essentially everything he did professionally, helped to teach the rest of us what it means to be a deep and outstanding social scientist.  He will be sorely missed.

Biden-Putin Meeting in Geneva: Let’s Not Call It a Lovefest