Never Give Up! Elena Favilli’s Success with “Good Night Stories for Rebel Girls”

Miki with Elena Favilli at the Italian Institute of Culture

Last week the Italian Cultural Institute of New York opened its doors to the first event of a series of conversations with Italian professionals and creators led by the Italian journalist Maria Teresa Cometto, in collaboration with the Italian consulate. Elena Favilli, a writer, creator and entrepreneur, was the first guest of the series. She attended the event in a casual chic outfit (matching my polka dotted dress) and a smiling face to welcome many journalists and fans who came to celebrate and listen to her success story.

But who’s Elena Favilli? She is joint chief executive, with Francesca Cavallo, of the children’s media company Timbuktu Labs, with offices in Santa Monica, Venice, London, New York (although not yet in Italy), and the co-creator of the global best-selling series, Good Night Stories for Rebel Girls, which has broken records on the crowdfunding website Kickstarter. The first book was published in 2016 and has since been translated into 48 languages, with over 1 million copies sold for both books. Ms. Favilli, only 36 years-old, has written for Colors magazine, McSweeney’s, RAI, Il Post, and La Repubblica, and has managed digital newsrooms globally.

If California has been the birthplace of her entrepreneurial creativity, Italy has kept an important space in the author’s heart. She adores New York, a place where she gets the most energy and creativity, but loves living in L.A. for its ability to recreate the love for nature and outdoor space she had growing up in Tuscany. Born and raised as the only child in Loro Ciuffenna, a small village in Tuscany, she had lots of time to daydream, read and write. This experience certainly contributed to her adventurous personality and creative mind, along with becoming a very independent and strong woman. In fact, she left at age 18 to study semiotics at the University of Bologna, and later won a scholarship at the University of Berkeley.

“My strongest asset “ Elena admits, “is my education, the backbone for my career. This should be a reminder to all young Italians who are leaving Italy, even without a degree, and to everyone else. We should all have access to free education”. In Silicon Valley she learned the tricks of business success: how to test, measure and execute a successful business plan. However, it wasn’t always so easy, and she has been vocal about the sexism of Silicon Valley with two articles published in 2015 and 2017  “San Francisco is an amazing city, but investors want to invest only in what they know and can easily recognize, typically men”.

For those of you not familiar with the book, it’s a nice format of 100 illustrated portraits of women, using both images and texts, used as a platform to showcase female characters and to inspire young readers. From astronauts to artists, they substitute the typical fairy tales we used to tell our little girls (and boys) with successful stories of exceptional and renowned women. Favilli explained how the creation of these books evolved, answering very detailed questions by the journalist Cometto.

How did you choose these women, and did you follow any suggestions?

“We only took suggestions for Volume II, not I. The selection for these featured women was an internal process, and there were two selection criteria: 1) choose them from across history, from past to present, in a contemporary passage; 2) choose women of different professions and expertise, so as to show young girls what it takes to become what they aspire to. In that, specifies Elena, the series of books is a celebration of work and of the persistence behind each of them, not just of talent and success”.

Did you get any feedback from the readers?

“The main feedback has been from young readers who told me, “I will be in this book, too”. It’s not a celebratory story, but we describe in a portrait of a few words the struggles of many successful women. That made the reader very curious to the point that they want to get to know more about these women.”

The books have been translated into 48 languages. Do you see any difference in the audience’s reaction in each country?

“The book will soon be published in Chinese; it has already been translated in Iran, and Turkey represents the strongest foreign market at the moment. I have been on a book tour in Italy, the UK, Mexico, the US and  Sweden. The biggest reaction came from Mexico, and its very emotional elementary school students. There the book has had a big impact, for a country of violence, becoming the symbol of strength for young women”. 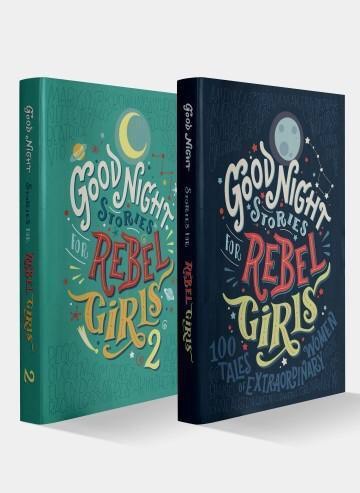 What about the relationship with traditional publishing houses and crowdsourcing?

“We launched a crowdsourcing campaign online since the traditional publishing houses didn’t properly get the book’s content. All I can say is to never give up. You can do it. Crowdsourcing is very hard, we got lucky. We had a successful campaign thanks to a combination of many favorable factors: 1) research and preparation work; 2) timing: you need to be passionate about your story as to give authenticity to the project; 3) the presidential campaign happened to be that same year, when people had to choose either a man or woman president. The book was published after the election and that definitively helped”.

I, along with many other moms of this earth and in NYC, felt extremely relieved by the existence of such important books as Good Night Stories for Rebel Girls. It’s hard to explain to my very girlish toddler that life isn’t all about pink dresses and charming princes coming to save you. For a curious young mind who’s always asking me, “mommy, what will I be when I grow up”, I ironically respond “Que será, será. Whatever will be, will be”–with a slight modification of the original song that Doris Day performed in the 1956 film, “The Man who knew too much– “the future is ours to see”.

These books have helped me in teaching Victoria an important story, we the women, can be whoever we want if we put our passion and persistence into anything we want to do! As Elena Favilli herself stated, “You need to be deeply passionate about your project, and authenticity will be recognized by the audience”.

That First-baby Experience Can Be Scary! So Much to Know, so Many Questions!