An Interview with Irene Sino, from Odessa with Love

Irene arrived from Odessa in 1990, a year before the Soviet Union collapsed and the Iron Curtain was lifted

When I first met Irene Sino, I was working at a small real estate firm, midtown. She and her husband, Nick were looking for an apartment that would serve as both, a NYC residence and a “vacation home” for themselves and Mika and Chica; their 2 small dachshunds. As well as office/gallery space for Nick’s art, antiques and architectural/interior design business.

After a four month search, we found exactly what they were looking for – a very unlikely and unusual result, as most people do not! The combined apartments on West 58th Street met all their requirements, with an additional caveat.    A studio apartment adjacent to the 2 they were interested in…..all 3 were for sale.

Seems the seller’s broker neglected to mention that dogs were no longer allowed in the building although the owners had two, who were very visible at all the showings. What followed, were three months of aggravation and intrigue while waiting to find out if the condominium association would approve Mika and Chica.

Only in NYC real estate would anyone believe the rest of this drama.

The board requested an interview to meet the pets!   In an effort to ensure a successful outcome, Nick hired an Attorney specializing in animal advocacy. Because Mika was a ‘show dog’, at the interview he sat on his two back paws, and circled around the group as if performing a special ‘plea to the condo board’!  Finally, after an additional week of stress, Mika and Chica received an acceptance letter from the Boards President !  A true story with absolutely no embellishment! 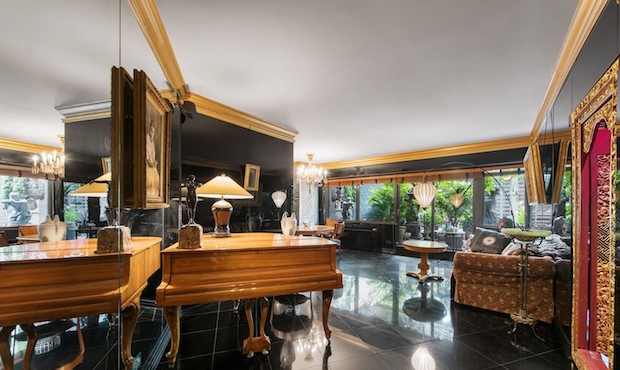 When I returned to my office, after the closing, there was a photo of two dachshunds shaking ‘paws’ taped on my computer screen!  woof woof ….   At last, there was reason to laugh!

Seventeen years later, Irene is an officer of the Condo Board.  And their life on W. 58th has been a source of great satisfaction, most specifically filling their expansive space w. beautiful art, sculpture, antiques, and volumes of books.    This elegant and serene apartment has an unmistakable European aura with the addition of a landscaped terrace equal in size to many studio apartments..   They have designed this Mediterranean oasis with exotic plants, classical statues and fountains.

To backtrack; Irene arrived from Odessa in 1990, a year before the Soviet Union collapsed and the Iron Curtain was lifted.

When I asked about the impetus to immigrate to the United States, she explained what life was like in Odessa.

In 1990, the Soviet Union was still behind the Iron Curtain, and life in Odessa came with a predictable set of rules passed down from one generation to another. With her adventurous nature, Irene knew that she would never be content living within this structure. Although her family background allowed her a privileged life; these creature comforts were not enough to satisfy her wandering spirit.

Irene’s family home, sat atop the Odessa Steps, made world-famous in the classic film ‘Battleship Potemkin’ by Sergei Eisenstein.  The ‘Odessa Steps’ are considered one of modern cinema’s most memorable images.  Her building was a focal point in this scene.  ‘Prime residential real estate’ !  As the daughter of an acclaimed violinist, Moscow Conservatory graduate, Professor, and Head of the String Instrument Department at the Odessa Conservatory, music was an integral facet.

Irene’s mother, a prominent teacher of Russian literature and journalist, instilled a strong sense of culture in her daughter’s life. It would seem appropriate that Irene would choose a future career in classical music. And, she did…

Irene graduated from the Odessa Conservatory of Music and became a classical pianist, as was expected. She had a successful teaching career, until her thirst for travel and adventure propelled her forward.  And was the impetus to shift gears and set sails.

Leaving her homeland and the exodus to freedom …

It wasn’t until 1985, under Gorbachev, that dreams were finally realized.  Due to his more liberal spirit; literature, film and music came alive, as the ‘curtain was lifted’… giving the country its first breath of fresh air.

From 1917 to 1991(when the Soviet Union ceased to exist) the country was under the communist regime. Despite the fact that leaving the country was always challenging, in 1989 Irene and her family settled in Italy, while awaiting their American visas.  The beauty of Odessa and its old-world mentality, were left behind.

Travel always played an important role in her life. During her most formative years, she was able to take long car trips with her parents within the borders of the country, experiencing her first taste of what she would ultimately create for herself. A life of travel.

It wasn’t until she arrived in America that she quickly realized that an introduction was an important component in carving a niche.  It was a fortuitous beginning, when Irene ran into an old friend from Odessa, who opened the door and introduced her to the head of one of NY’s most prominent Travel Agencies. The rest is history!

The evolution of Panorama Travel

Irene’s base has broadened since opening Panorama Travel, and she is now renting a full floor of office space to house her ever-growing travel business. Panorama Travel – one of the city’s foremost full service agencies, specializes in personalized service catering to her clienteles specific needs – from obtaining visas to hotel transfers & concierge service, she has the ability to negotiate discounted rates due to her connections to wholesalers and smaller agencies.    The tours she provides her clients are selected based on special rates to the most unique and exotic destinations… most ‘off the beaten path’…  and most in Europe.  Many of these tours are timed to different cultural events and coordinated with special music festivals, and theatre, opera and ballet performances.  All are associated with the rich history of European architecture, art, gastronomy, wine…

I wondered about these destinations and how she is able to zero in on the most private, secluded and remote spots.

As she explained, it is through her travels that she is able to touch, taste, smell and fully immerse herself in the culture, giving her the ability to educate and share these experiences and emotions with her clients.   Some of her most popular packages now include tours to the Republic of Georgia, Uzbekistan as well as other cutting edge locations.

Not surprisingly, most of Irene’s personal favorites, are in Italy.  In the past year alone, she participated in several trips with the main theme being the food valley of Emilia Romagna, South Tyrol, and Italian Borghi.  Many of these hidden gems have significant cultural, historical and architectural sites… with the main perk  – it’s outstanding cuisine.    Emilia Romagna is a destination for the gourmand in search of tradition, dating back to ancient times.   The range is broad from high end restaurants to street food.   The food and wine heritage is a reflection of the regions culture with 25 Museums dedicated to the ‘pleasure of food’ !

Some of Panoramas newest and most requested tours focus on ‘wellness’

On another note, Irene has had the extraordinary advantage of traveling, under the guise of ‘work’!

I wondered how Irene is able to oversee Panoramas daily requests, while traveling.

She discussed the importance of new technologies and how it has enabled her to manage the daily business at Panorama remotely, and from virtually any part of the world.   She can now enjoy life from abroad while managing her NYC office ….Freeing up time for other business ventures.   She is currently promoting the European Wellness Spa culture in the US.

And finally, I was curious about the ‘next chapter’…

This new sense of independence has allowed her more time to contemplate a lifestyle change.   Paring down has always promoted a sense of freedom. Possibly a move to another part of Manhattan – a garden PH in a W Village brownstone / an Upper W. Side pied-a-terre / a move abroad – a farmhouse in Tuscany. Or simply a continuation of travel, for the sheer enjoyment of carving a niche in another part of the world. They had called me several months ago with this dilemma and most frequently asked question;  ‘how is the market and is it the right time to sell”?

In conclusion, she mused that periodic change allows one a sense of freeing up and directing vital energy into a positive channel… ultimately creating a full sense of satisfaction, while reaping the rewards of life.