What Did Ancient Romans Snack on While Watching the Gladiators Fight?

Specialist archeologists clearing drains in the Colosseum find the answer

The Roman Colosseum is a treasure trove of historical facts for archeologists who continue to make discoveries even after 2,000 years. Since January 2021, a study has been conducted to clear around 70 meters of ancient drains and sewers beneath the iconic construction.

The Colosseum was the biggest amphitheater in the Roman Empire, the first super-stadium in history, famous for hosting gladiatorial fights and other public spectacles in front of crowds of tens of thousands. It fell into disuse around 523 AD. 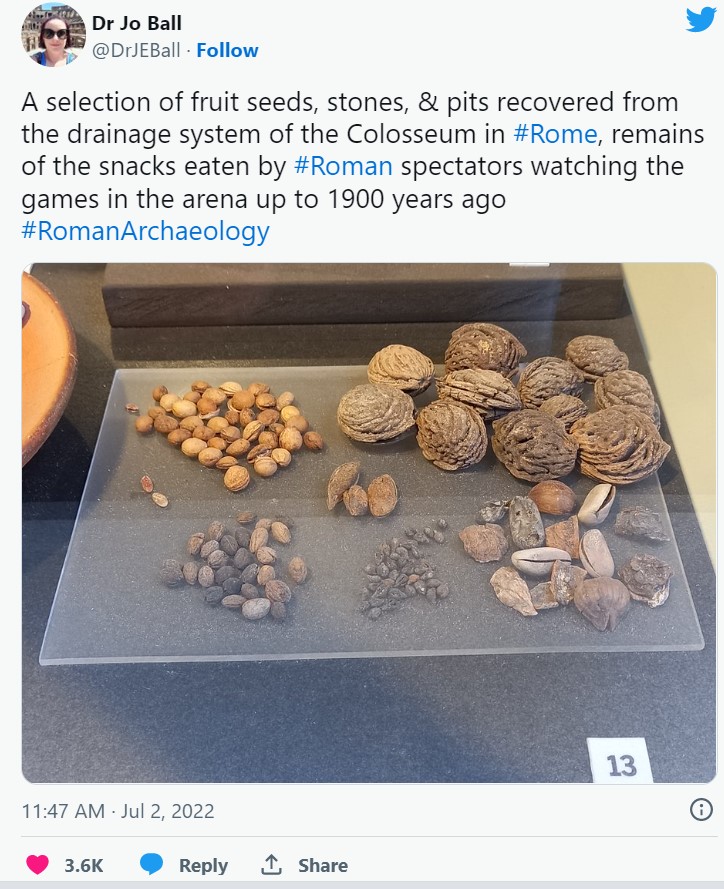 The researchers (consisting of specialist architects and archaeologists), used wire-guided robots to explore the arena’s complex drainage system, revealing a variety of 1900-year-old ancient snacks consumed by spectators—a stunning peek into the habits and lifestyle of those who attended events there.

So, what did the ancient Romans nosh on while they were watching hair-raising sporting events and blood-curdling wild beasts?  The team found food fragments of figs, grapes, cherries, blackberries and walnuts.

In addition to the snacks, they also found the bones of bears and big cats, probably the remains of animals used in hunts or forced to fight each other for entertainment.

And just as we may find pennies on the pavement today, archaeologists also uncovered 50 bronze coins that they lost. These spanned roughly AD 250-450 during the late Roman period, in addition to a silver coin from AD 170-171 from the reign of Emperor Marcus Aurelius.

Relics like these provide a snapshot into the “experience and habits of those who came to this place during the long days dedicated to the performances”, said Alfonsina Russo, Director of the Colosseum Archaeological Park.

Måneskin’s Success: “We Were Musically Right for People Around the World”

Chinese Balloon Shot Down Over Atlantic Ocean by U.S. Military