Andrew Yang Defends Columbus: in New York, the Statue is Not to be Touched

The candidate - one of the favorites for New York City mayor - in an exclusive to VNY: "Columbus serves as a beacon of pride in a shared immigrant heritage."

Andrew Yang in the video that announces his candidacy for mayor of New York City, as he eats a typical NY pizza slice 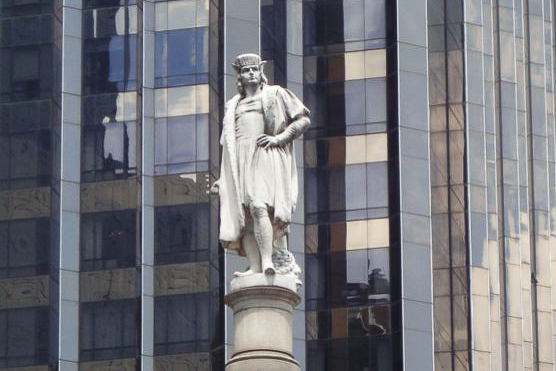 The discussion around Columbus has been quite heated for a few years now.

On the one hand, there are those who argue that the Italian explorer is a figure to be celebrated for his courage and resourcefulness, almost like a messianic figure.

On the other hand, there are those who argue that Columbus was the beginning of the end. The end of the indigenous communities, decimated by the diseases brought by the navigator and by the raids he committed. The end of their freedom, because they were forced to convert to Christianity by the practice of requerimiento. The end of the possibility for the natives to have a voice in narrating history.

The discussion between the two factions has become even more tense since last year. The murder of George Floyd on May 25, 2020, and the tail twists of the Trump presidency, have radicalized the positions of the electorate.

Symbols honoring the navigator have become a battleground, raising a lot of questions. Can tearing down statues and erasing centuries-old ceremonies help to center the voice of communities marginalized by history’s victors? Or is this a form of historical revisionism that risks making us forget – for better or worse – where we come from?

Ahead of the November elections that will elect the city’s new mayor, we asked the candidates what they think about Columbus and what they plan to do with its statues and celebrations.

We asked all the candidates. Democrats, Republicans, Conservatives, Liberals, Independents, for a total of 22 candidates. But the topic doesn’t seem to have piqued the interest of all the incumbents. Only two responded to our questions – Andrew Yang (Dem.), and Bill Pepitone, (Con.).

The first question concerns the possible removal of the statues. There are 8 Columbus statues in NYC: 5 in Manhattan, 1 in the Bronx, 1 in Queens and 1 in Brooklyn. In January 2018, the final report of the “Mayor’s Advisory Commission on Art, Monuments and City Markers” established to “keep the Columbus statues in place,” and to “commission new monuments for groups of people that have been left out, displaced, or erased from public histories and public spaces.” In 2020, many protests and new petitions renewed the requests for the removal of the Columbus statues around the city.

The other issue concerns the Columbus Day celebration. On May 4, 2021, the NYC Department of Education cancelled Columbus Day from the 2021-2022 calendar, replacing it with “Italian Heritage Day/Indigenous People’s Day.” The Italian-American community did not let the issue pass. Not least because of the way it was handled. It seems that the change in the name of the holiday was not the subject of any consultation, but simply appeared on the department’s website the day the school calendar was published. It even seems that, in a very early version of the calendar, the holiday was simply cancelled, without providing for any replacement celebration for the Italian-American community. It is also for these reasons that a large group of associations of Italian-Americans – mostly Republicans – demonstrated at Columbus Circle. We have published here in full the responses of the candidates, in the hope that in the coming days the voices of others who did not respond will be added. It is important to ensure transparency to voters on the issue ahead of the primaries, and to enrich a debate that needs political discussion.

Born into a family of Taiwanese descent in New York in 1975, he created a few startups and then founded Venure for America (VFA), a nonprofit organization with the goal of creating jobs following the 2008 recession. In 2020, he participated in the Democratic primary for the presidential election. His workhorse has been a proposal for a universal basic income of $1,000 per month for everyone of legal age to combat unemployment created by the automation of manufacturing processes. He is running for the Democratic Party.

What does Christopher Columbus represent to you?

“I see Christopher Columbus as a figure with a long-standing cultural connection to New York City, and especially to our Italian-American community, where he serves as a beacon of pride in a shared immigrant heritage.”

Will you order the removal of the Columbus statues?

“As mayor, I will not order the removal of Columbus statues around the city. We should be identifying more locations for monuments that honor historically overlooked or marginalized groups, but I am committed to focusing my limited time in the administration on unifying New Yorkers and improving their lives. I will seek their input, but am not planning on renaming statues or streets.”

Will you mandate that Columbus Day be celebrated and participate in the parade?

“I don’t think we should be getting into huge fights over which day is named after who, or pitting groups against each other. I think we can both keep Columbus Day and celebrate Indigenous People’s Day by honoring them on a separate date. Ultimately, my goal is to unify New Yorkers and drive our recovery forward, and I’ll be laser-focused on solutions to do just that.”

Retired policeman. Born in Brooklyn to a family of Italian-Americans, he joined the police in 1989. He served as the NYPD’s security service coordinator. He decided to run for office last summer. “I was watching television and watching the riots in the city – the violence and the arson, the looting and the police officers being attacked,” he said. “And there was just no response from our elected officials. And that really made me angry.” He is running for the Conservative Party and has no opponent in his party’s primary.

What does Christopher Columbus represent to you?

“Christopher Columbus represents the struggle that Italian Americans faced when they arrived in America. Personally, his memory reminds me of my grandfather, who came to this country from Italy in 1924. His family fought to survive, not knowing if they would have food on the table from one day to the next. Yet he worked hard, built his own business, and fought for the United States in World War II aboard the USS Savannah. His love for his birthplace was matched only by the love for his new country. As a proud Italian American, I greatly appreciate the sacrifices made by Christopher Columbus, my grandfather, and so many others who endured so we can enjoy the freedoms our country provides.”

Will you order the removal of the Columbus statues?

“When elected Mayor of New York City, I absolutely will not remove any of the Columbus statues across New York City, nor do I support the removal of any of our existing statues and monuments. They are part of America’s and New York City’s history, and should serve as a learning and teaching tool for parents and educators instead of being removed and historically erased.”

Will you mandate that Columbus Day be celebrated and participate in the parade?

“I strongly oppose the decision to replace Columbus Day with any contrived, politically correct renaming, as it is an affront to Italian Americans and another attempt to divide and marginalize New Yorkers. It is our history, and should not be cancelled by administrators with radical agendas. I absolutely will order the celebration of Columbus Day, and would be honored to participate in the Columbus Day Parade.”

Bronx Against Columbus? Those Who Want to Get the Navigator Out of NY

Cartoon of the Week/30

Inferno a Manhattan: a fuoco un edificio a Hamilton Heights