The US President tweeted that the “fraudulent” elections in November should be postponed: he’s already preparing to exit the White House as a “victim”

In one of his usual morning tweets, in which he decides what the talk of the day will be for media outlets, Trump decides to post that the November elections risk being the most “INACCURATE & FRAUDULENT” (all in caps) and that to avoid a “great embarrassment for the United States”,  we should postpone the presidential election until “the public can properly, securely vote???” (with 3 question marks):  All this coinciding on the same day with catastrophic news about the economy. 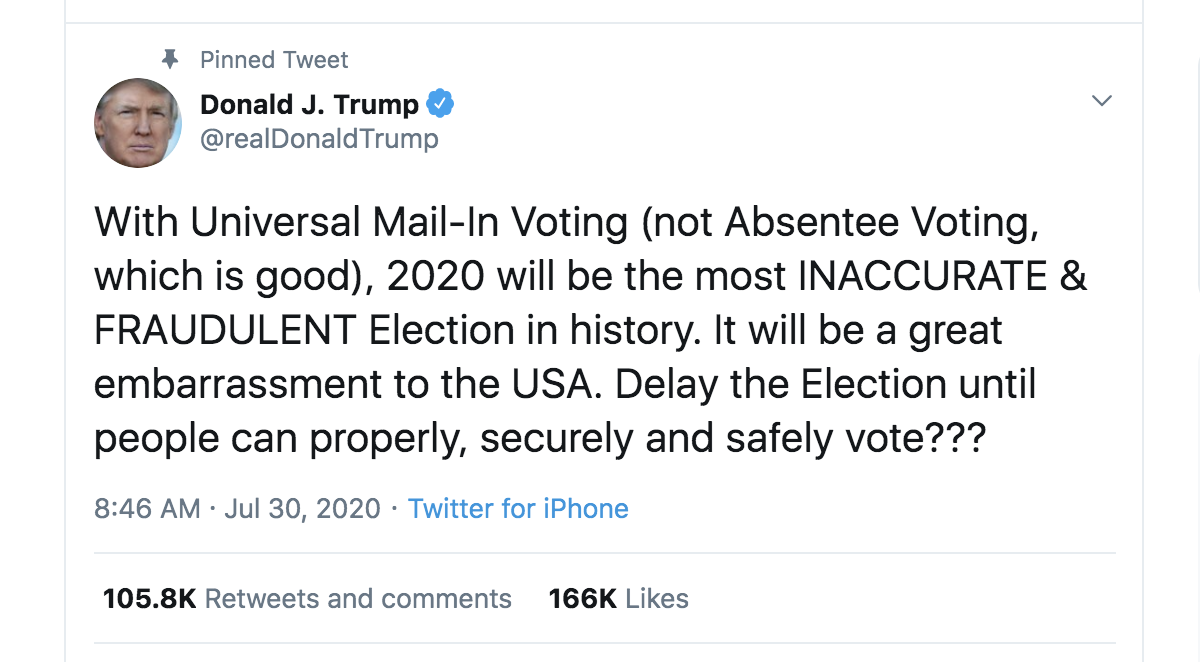 Should we be surprised? Not in the least. It’s been years that I have been stating in this column that the U.S. Constitution and Trump are mutually exclusive!  Even if in this case, we think that Trump is pretending not to know the law, let’s remember that the president of the United States can never decide the date of a presidential election or the election of the Congress. The Constitution is clear; it is the Congress that votes into law if an election that must take place on “the first Tuesday of November” must be postponed. Since the House is controlled by the Democratic Party, which would never accept Trump’s “suggestions”, this proposal has no chance of going forward. Trump now maintains that COVID-19 will be too dangerous for voters? (Oh, so voting poses a risk, but reopening schools doesn’t? So much for consistency). We will vote by mail; this will be the response of the Democrats.

However, if Trump knows that he doesn’t have any legal recourse for postponing the election, why is it that he’s suggesting this to his millions of followers on Twitter? Is he planning a coup? Even though Trump has repeatedly shown himself to have an outdated Fascist disposition and Fascist ideas, as he recently displayed in Portland, he knows very well that if he even tried to impose his will on the foundational principle of the American democracy–the electoral process–he would be crushed and, I hope, finally behind bars. Trump, however, trying to change the news cycle that announced a failing economy while he wrongly claims that it is in recovery, opted to announce his final campaign strategy: the “delegitimization” of election results.

Since he has by now understood that Joe Biden is going to bury him in a democratic landslide, even in states that up to now have been a lock for the GOP, at this point he’s trying to use the weapon of delegitimization: the election results are to be erased – at least in theory.

This morning’s tweet, which had already been preceded in the past weeks by other statements about how the elections will be “stolen” by the democrats, serves this purpose: to prepare his base for the statement that he will make on election night after Biden will have declared victory. At that point, his followers will be ready to protest and make it so that when Trump leaves the limelight (because he will be ousted from the White House, as the Secret Service will have to take care of the new president), he’ll be able to state that he did not lose, that he is still the winner, as the Democrats will have rigged the election with the vote by mail, etc. In reality, Trump only thinks of himself — and of the future, yes, but not the future of the USA. Of his own! He’s probably already preparing his next TV show, to air on a new TrumpTV, that from January 21, 2021 will announce: “America, You’re Fired!”