In "The Great Reversal: How America Gave Up on Free Markets", Thomas Philippon utters the unspeakable. 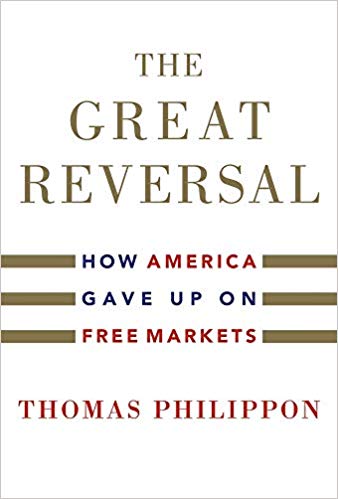 , an avowed French admirer of the American can-do attitude, economics professor from Paris where he graduated also in Physics, named by the IMF as one of the “top 25 most influential economists under 45” and now one of the rising stars at New York University where he teaches international finance, uttered the unspeakable.

In a book published by Harvard University Press, The Great Reversal: How America Gave Up on Free Markets, the French economist states plainly what his more politically correct colleagues chose to gloss over. American companies, he says, are losing their edge. Increasingly, the Paris professor explains, America’s powerful corporations, instead of investing in innovation, are squeezing as much profit as possible from capital in order to create wealth mostly to the advantage of top managers and largest shareholders. They ruthlessly stifle competition. In Washington, they employ armies of deep-pocketed lobbyists, whose job is to pressurize (and bribe) politicians to extract from them protectionist laws and subsidies, or profitable Government contracts.

In essence the author of The Great Reversal turns upside down the Trumpian slogan “make America great again” by showing with facts and figures that it does not make any sense. The single most important global issue of our present time, he writes, is not an impossible return to the past. The present, and even more the future, will not be dominated by America and Europe. It will be a multilateral one – whether the still powerful but lumbering U.S. giant is prepared to accept it or not.

Philippon is not alone to press the Alert button. New evidence from the latest World Inequality Database of the U.N. Department of Economic and Social Affairs shows that in America there is a huge rise of wealth concentration at the top, but stagnation at the bottom 50 percent. And the wealth imbalance reverberates worldwide. According to the 2019 Multidimensional Poverty Index (MPI) of the U.N.  Development Programme, 1.3 billion people are  “multidimensionally poor”. Poverty in the index is defined not by monetary income alone, which even at purchasing power parity is hardly representative, but more accurately by various indicators. They include poor health, poor education, low quality of work, and the threat of violence.

How did America, still believed to be the champion of private initiative, turn its back on free markets? Philippon admits that he did not expect what he found out in the Land of the Free. When number crunching showed him a different story from the free-market America that conventional wisdom portrayed, he reacted like John Maynard Keynes, who is credited with saying to a critic, “when the facts change, I change my mind, what do you do, sir?”

America’s most urgent economic problem, as data showed time and again, was not too much capitalism but too little competition. “The question that spurred me to write this book, the author admits, is surprisingly mundane. Why on earth are U.S. cell phone plans so expensive? Or to broaden it a little further, why do consumers Europe or in Asia pay less for cellular service and, on average, get much more?”

Plenty of similar questions, to be sure, in the U.S. constantly surprise the outsider. Why is the American Internet so slow and costly and why is U.S. mobile phone service so unreliable compared even to Romania and Russia? And what about the costly and inefficient trains, and why are American airlines so much more expensive than flights in Europe?

Or why for instance, should milk in the U.S. cost up to 4 times more than in Europe? And what about the absurdity of building in Manhattan those largely unoccupied 350-meter high “skinny towers” with apartments costing up to $ 200 million that not even the richest oligarchs intend to buy?

The latter question, actually, has a cynical explanation: money laundering, courtesy of certain loopholes allowed by the permissive U.S. property laws. But what about healthcare? America spends almost 20% of GDP on health and has the best hospitals and state-of-the-art medical equipment. And yet, for health indicators ranks only 35th in the 2019 Bloomberg World Health Report with an index score of 73 (Spain with 92.8 is first, followed by Italy with 91.6, Iceland with 91.4 and Switzerland with 90.9).

The U.S. market economy, the French economist points out, is seriously distorted by excessive concentration of corporate power. Increasingly the new mega-firms grown out of the digital revolution such as Amazon, Apple, Google, Facebook, as well as more traditional industries like aerospace, defense, healthcare and pharmaceutical industries have a vested interest in preserving their dominance and keeping competitors away.

As a result, both consumers and workforce suffer, and productivity declines. But contrary to conventional wisdom the cause is not technological. It is political.  “I have traced the decrease in [American] competition to increasing barriers to entry and weak antitrust enforcements, sustained by heavy lobbying and campaign contributions” concludes the author of The Great Reversal. Market is partly absolved. Bad politics and poor governance are the main factor of America’s relative decline that, if unchecked, threatens to turn into a pandemic.

A conversation with the gatekeeper of Bamonte’s Restaurant

What Could America and Russia Possibly Still Have in Common?

The “Re-Appearing Pheasant”: A Poetic Encounter at Italian Cultural Institute

A conversation with the gatekeeper of Bamonte's Restaurant