The courage and determination of Captain Carola Rackete remind us that there is a way to do good: rebel against evil

There is one pair of shorts that has kept me up during these hot and humid summer nights. Specifically, they are the red shorts of Valeria Martinez, the 24-month-old girl who fled El Salvador and died last week in her father’s arms while crossing the Rio Grande into the U.S. Her shorts were as red as the shirt of Aylan Kurdi, the three-year-old boy who fled Syria and died in 2015 while trying to traverse the Mediterranean Sea to Europe. He, too, ended up on all the world’s newspapers and digital media—but much too late.

Aylan’s shirt was as red as the coat of the anonymous girl in Schindler’s List, the only instance of color in the otherwise black-and-white film. She appears in Spielberg’s film but for a few seconds: first, during a roundup, and subsequently, hidden in a pile of dead bodies on a cart. In an article for La Repubblica (“Spielberg, Manzoni e i colori della pietà,” February 20, 1999), Adriano Sofri convincingly and movingly reconstructed the literary genealogy of the “girl in the red coat,” tracing her back to Alessandro Manzoni’s Cecilia from The Betrothed, by way of Primo Levi’s The Drowned and the Saved. 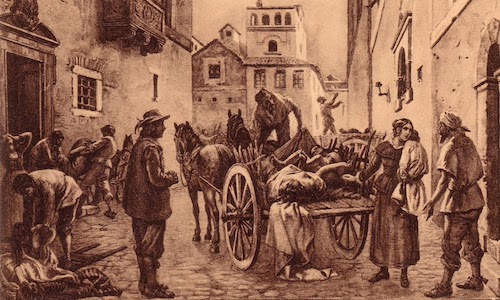 There is a symbolic and strong connection between the literary-yet-not-entirely-fictional character of Cecilia – clad in a little white dress, her mother harnessing a white handkerchief to shield her from the filth of the world – the unnamed girl in red, Aylan’s red shirt, and Valeria’s red shorts. The latter two were real children, their deaths precipitated not by some cruel, predetermined destiny, but rather by our own collective indifference.

Numbers and statistics are indispensable for ensuring an accurate historiographical reconstruction of facts and events – whether they may be the thousands who fell to the Black Death or the millions who died during the Shoah – but Manzoni and Spielberg created two girls who moved generations, both aware of the reality that it is only in the face of a single story, a single image, or a single shot of pain that we allow our humanities to get called into question.

The viral photos of Valeria and Aylan were so poignant and shocking that our ever-merciful and civil contemporaries inhabiting social media networks would, for a time, darken or blur the photos out of decency. Some would even add disclaimers. But as the photos proliferated on the Internet, even the least cynical of us gradually (and inevitably) became desensitized to them, for there is yet no literary or cinematographic genius who could extract the children from the contemporary media swamp—and the collective amnesia that follows.

Yet from that same swamp, two images emerge bridging the two deceased children with the humanitarian migration crisis and the inhumane treatment of refugees, immigrants, and asylum seekers therein. The first is that of Speaker of the House Nancy Pelosi – clad in a red pantsuit, her head hanging as she retreats from the Speaker’s podium – having just conceded her defeat and that of the Democratic Party by passing a border funding bill – supported by the Occupier-in-Chief and his Republican lackeys – that lacked any of the concessions requested by Pelosi and the Congressional Progressive Caucus that would have added protections to the migrant children that remain in U.S. custody. The humiliated “lioness” represents yet another defeat of center-left establishment politics, plagued by absurd internecine strife and overwhelmed by a renascent racism and nationalism looming in the backdrop.

The second photo is that of Carola Rackete, the 31 year-old German woman at the helm of a Sea-Watch ship responsible for saving the lives of 42 migrants lost at sea, and who has just been detained by Italian authorities for docking the ship at Lampedusa. Carola, with her beautiful face and fierce expression, has a university degree and speaks five languages—which is one university degree and five languages more than Matteo Salvini, the Italian Minister of the Interior who disparaged her as a “sbruffoncella,” or a “cocky, arrogant little girl.” Yet Carola’s courage reminds us that there is a way to rebel against evil, and that is to do Good—to do it even if it requires sacrifice and necessitates disobeying unjust laws (and not even a law, in this case, but rather a ministerial directive contravening the Italian Constitution and the UN Convention on the Law of the Sea).

I do not know whether Carola has ever heard of Don Lorenzo Milani, but I am certain that he had someone like her in mind when writing his 1965 Letter to the Judges: “We must have the courage to tell the youths that they themselves are all sovereigns – thus obedience is no longer a virtue but the most deceptive of temptations – that they should not believe they can use it as a shield before men or God, that each of them needs to feel as though they alone are responsible for all.”