How well do the democrats understand that today's American society favors Donald Trump?

Too many of America’s Democrats overreact to the smallest scent that President Trump may be in political trouble. Let one more woman claim she has been abused by Trump, and these Democrats taste impeachment. Let Trump tweet that his nuclear red button is bigger than Kim Jong­un’s, and some Democrats expect that, at long last, supine Congressional Republicans will rebel against the president. Let the President tell one more blatant falsehood, and Democrats anticipate a feast of victory celebrations this coming November.

Michael Wolff’s recent book, Fire and Fury, leads some Democrats and many others to imagine the impossible, indeed, the ridiculous. They fantasize that a Republican dominated Congress, for the first time ever, will use the Constitution’s 25th Amendment to remove Trump from office.

As if most of what Wolff has published were not already well known public knowledge. As if no one imagined how quickly Wolff’s fellow journalists would call attention to the book’s many errors. As if no one considered what life in America  would be if the likes of a Mike Pence were ever to become president!

Political delirium is boundless. Americans who are bitter because Trump lacks any previous political experience now seem ready, indeed enthusiastic, to turn to an Oprah Winfrey, another American who is also devoid of any such experience. It is not to Winfrey’s credit, one might add,  that she herself triggered this “groundswell,” coming as  it does on the heels of her “Golden Globe” speech.  “Oprah for President” would bePage | 1 close to the top of the Democratic Party’s list of self-destructive impulses.

The powerful and disquieting reasons why Donald Trump is now the American president, and why he might well endure, are worth examination.

To begin with, Donald Trump is not a populist president—not socially, not politically and certainly not economically. Some of the Trump rhetoric may sound populist. In reality he cares least of all for most of the self-same persons who sent him to Washington. Far from enacting populist public policies to provide welfare for the down trodden, Trump still urges Congress to construct a needless and expensive wall to fence off the Mexicans. Contrary to his promises, it is the American taxpayer, and not Mexico, that will foot the bill for this nonsense.

The term populism includes an emotional component—the expectations of ordinary people that their political leader will enact public policies which lessen and not increase their pain, and which will alleviate their anger. For these people a “drained swamp” would mean above all an end to public policies which overwhelmingly aggrandize a nation’s elite, and especially the latter’s economic fat cats.

How can a Trump be mistaken as a populist?  He is a  president  who  has bloated his cabinet and other federal agencies with billionaires!  Many of these men and women are expected by Trump to cripple or to destroy the same federal units they are named to lead. As members of a powerful political cabal, they will leave this planet and its people in worse shape than they found it.

There is also the mistaken claim that Trump’s public spending will astronomically raise the public debt. Yes, this mushrooming may well occur.  Indeed it appears guaranteed by the hastily-enacted Trump/Republican income tax measure. This bill is patently crafted to benefit the super-rich, and to maim economically the middle class. Trump’s intoning of “America First” carries the anti-populist implication that American socioeconomic inequality, already   soaring and leading the pack, is going to get much worse. If the deficit reaches the heavens, its cause will not be public spending on the country’s general welfare! 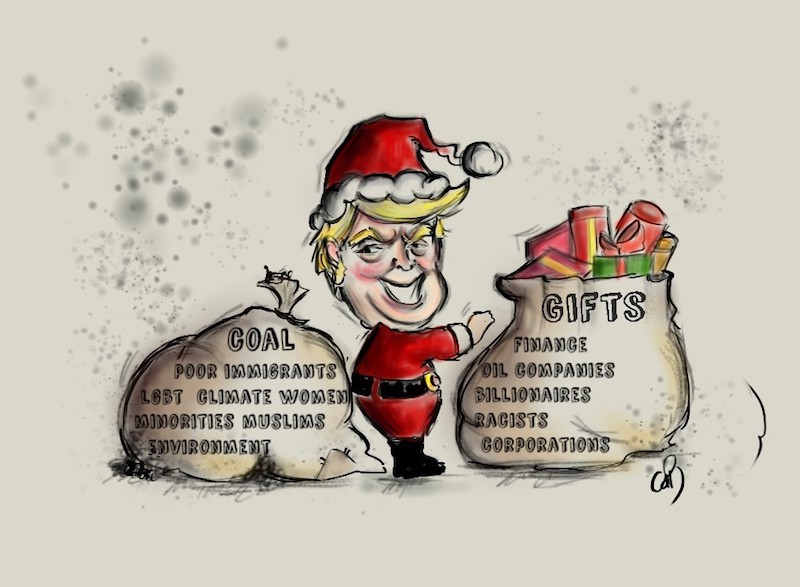 Despite all this, Donald Trump appears politically immune, untouchable. One reason is that no one better than he exploits the mass media to personal advantage. He has openly thanked profusely even the media most hostile toward him.  In general the media have provided Trump, at no cost to him, with billions of dollars’ worth of advertising and publicity. As president, he now gets global attention whether he hits a golf ball down in Florida, or issues yet another angry self-serving tweet from the Oval Office.

If name-recognition is the quintessential political asset so many of the experts claim, Donald Trump is without any peer in this category. This being so, why would anyone be surprised on learning that, even if he did not really want or expect to get four years in the White House, Trump may now be contemplating a second term! He is encouraged to do this knowing that, despite what the polls may say, his electoral base remains solid. That base remains unmoved by whatever kind or magnitude of disturbing evidence Trump’s  daily behavior may be.  In effect, what may logically frighten those at home and abroad, Trump’s hard-core electoral supporters strongly endorse.

We might begin with a simple historical recollection: America’s Founding Fathers created, and its people apparently accept, a presidential Electoral College designed to prevent popular rule. Some of Trump’s crew may now claim that they knew this all along and indeed intended electorally to exploit this aspect of the system. This is patently knowledge. Nevertheless, as the popular vote will underscore, Donald Trump is a distinctively minority president, who received almost three million fewer votes than did Hillary Clinton.  He is not the first person to fall into the minority-president category; but he is by far the most spectacular, as well as, for most Americans, the scariest of them all.

To be sure, the ancient art of gerrymandering also helps the Republicans to dominate the Electoral College. It is also the reason why Republican minorities dominate so many state legislators and, by implication, governorships as well. A basic political fact of the United States is therefore this: That the nearly half of the population which now resides in the country’s huge urban and cosmopolitan centers will remain markedly underrepresented.

Donald Trump’s popularity in the over-represented “Red” states is so strong that even those Republicans who detest the president guard their tongues.  This includes almost all of those who, during the Republican presidential primaries, were demeaned, belittled, lied about and otherwise brutalized by Donald Trump. For most of these Republican office holders or political appointees, neither ancient Republican Party principles (e.g., anti-deficits) nor the integrity of the Democratic Republic itself, is more important than his or her personal political career.

At least two additional aspects of contemporary America seem tailor-made to advantage Trump against his potential opposition. The first is that the country is widely misogynist. No presidential candidate before Donald Trump promised, if elected, to send his opponent to jail. Even if Trump now has second thoughts about doing this, this is not true of his followers. It is arguable that not even Trump would have risked this unprecedented threat were his opponent male.

If Trump has second thoughts about Hillary Clinton, this is not so with his followers. The latter include millions of American women for whom the Russian-induced release of the Clinton emails comes down as much more condemnatory than the long list of accusations, including harassment of women, with which the president has been associated or charged. If widespread misogyny were not politically helpful, it is unlikely that Donald Trump would still be “running against Hillary!”

Misogynist views are not limited to the women in Alabama, or the Deep South.  Without an astonishing level of avid support from so many American women, Trump would not be president.  This degree of female tolerance of male hostility and abusiveness may be thought in Europe as  being weird or unbecoming.  In contemporary America, with the exception of women of the younger generation, this type of misogyny is a fact of potentially enormous political importance.

America alas is also a deeply racist country, another of the factors that worked and continues to work in Trump’s favor.  From his first step into the Oval Office, for example, Barack  Obama understood that he, an American black, would never  be permitted to act with the degrees of freedom enjoyed by any of his white predecessors. The racism may be subliminal for most Americans, and even inactive for almost all of them.  But ask anywhere about the behavior of the local police, and the scenario becomes at least somewhat blurred.

Were racism, subliminal or otherwise, not there to be politically exploited, Republicans would spend less time and effort capitalizing this advantage. Instead, beginning with Trump himself, Republicans go to incredible lengths to hang the Obama name on all manner of public policies they wish to limit or destroy.  This includes associating the Obama name on to public policies with which the former president has had little or nothing to do.  This is not an accidental oversight.

Consider the following: When Americans are asked whether they approve of or desire government-sponsored health care for themselves, their spouses and/or their children, about two-thirds of those polled reply in the affirmative. On the other hand, ask any national sample of Americans whether or not they are in favor of “Obamacare” (another name for the Affordable Care Act) and the majorities melt away, they evaporate, they disappear! This too is not just accidental.

America’s Democrats need to know and to come to terms with these facts. They will help to fashion more opposition to Trump, perhaps greater success at the polls.  The ways, the means, the candidates capable of placing the United States on a better, a healthier, political trajectory are urgently needed. It is essential for American that  the Trump-type  presidency not be  “institutionalized,”  that is, to be considered normal.

When, as chief executive and commander-in-chief, Trump appears to behave excessively, it is wise to remember not just that these huge executive powers were already there, in place, when Trump entered the oval office.  These   powers grew enormously during the presidential administrations of Bill Clinton and Barack Obama as well. We are now, many of us, living nervously with this reality.

Finding the Democratic candidates who, next November, will create more than the average or “normal” losses for the party in power  is clearly a high-priority mission.  Locating and naming a candidate capable of denying Donald Trump a second term is that much more challenging. American being poltically as described, the future march is steeply up-hill!.

The foregoing would seem to render Quixotic any thought that Oprah Winfrey, despite her widely-recognized talents and achievements, would make a viable candidate against Donald Trump. Immensely more hard-nosed, more creative political thinking is urgently required—not just of the Democrats but, rather, of all of those Americans who share a concern regarding the destiny of our Democratic Republic.

Biden-Putin Meeting in Geneva: Let’s Not Call It a Lovefest