Historical Revisionism, Christopher Columbus and the Confederate South: The Future Will Judge Us Too

America (much like ancient Rome), has never been more attuned to the symbolism of public monuments.

On the occasion of the Columbus quincentennial in 1992 a pundit declared in The Chicago Tribune, “Poor Christopher Columbus. He’s dead, white, European male, politically incorrect… charged with a litany of sins… History can’t even get his name right. It was probably closer to Cristobal Colon.” This is an illustration of the countless attempts to “correct history” by rashly jumping from one mistake to another. Columbus was born in Genoa, Italy, his father’s name was Fortunato Colombo, his own name was Cristoforo Colombo. These facts are patent and easy to verify, yet the writer of this piece, titled, “Those who condemn Columbus ignore history’s complexity” ironically ignored part of this complexity. In the rush to dispel some of the many myths associated with Columbus’ “discovery” the author did not question whether the details were right. It seems that too often, we fail to question that which is perceived as fact, or fall into the trap of looking for the “quick and easy fix”.

At this point, it is unnecessary to enumerate the charges brought against Columbus by those who suddenly discover that the ditty, “in 1492 Columbus sailed the ocean blue” is supposed to be taken as just a nursery rhyme, not as a historical account. We all know the accusations of rape and pillage that have been brought against the discoverers of the new world (who we eventually learned, did not even discover any new worlds but only revealed their own ignorance of lands that had in fact been populated for ten thousand years). The debate about what to do about Columbus’ standing in history has been waxing and waning for some decades, but has gained new traction as a result of the recent events at Charlottesville, Virginia.  These events have torn the bandage off the suppurating wound of racism in America and greatly expanded the question of the memorialization of historical figures and events, not only as it applies to Columbus, but most urgently in reference to names and monuments that may remind us of the Confederate South, the Civil War and slavery.

We are in short, in the process of burying the uglier incidents of history in order to discredit them. If we believe the age-old aphorism that history is written by the victors (and this idea goes back all the way to Plato) then perhaps this is one way to punish the European imperialists who brought destruction to the new world: take away their victory by supplanting their version of history. Shift the focus from the conqueror to the conquered. In 1992 some communities in California renamed Columbus Day “Indigenous People’s Day.”  These California communities were later followed by others in Phoenix, Denver and Seattle.

A few days ago, on September 12, 2017 a statue of Christopher Columbus located in Central Park, New York City, was vandalized. The message was clear, his hands had been painted a blood red and the legend scrawled in big letters on the pedestal read: “Hate will not be tolerated”. (However, we can assume that those who hate Columbus, Robert E. Lee or any of the other controversial figures are free to do so.) 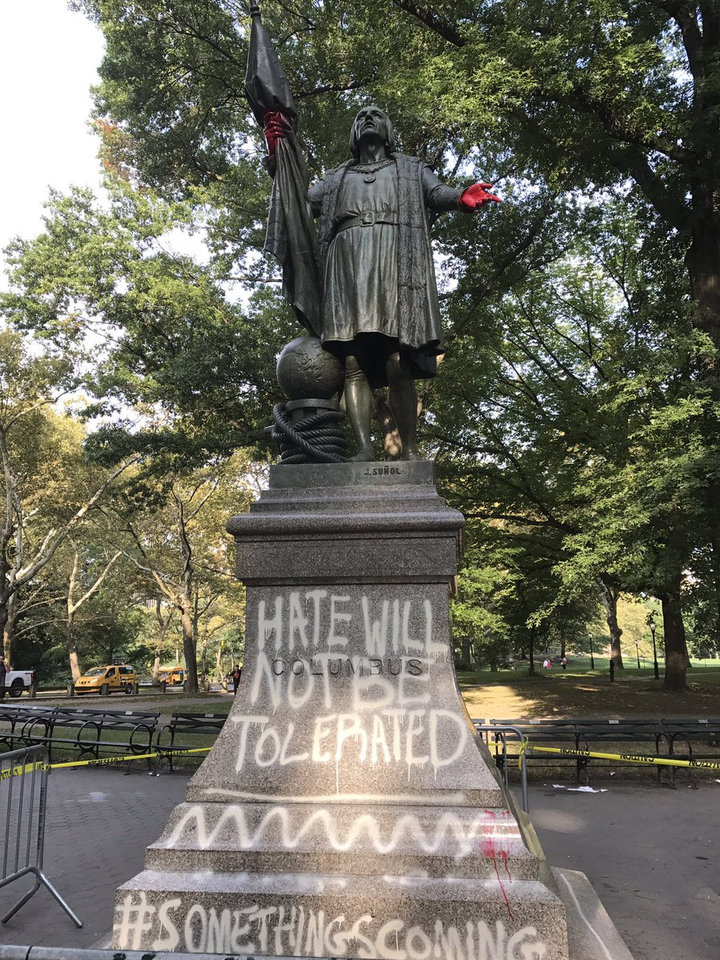 One way of understanding the shift in the perception and appreciation of public figures and monuments is to contextualize it as an example of historical revisionism. What exactly is historical revisionism? While this may at first glance appear to be a straightforward question, upon reflection we realize that it is not as easy to answer as one would think. One widely accepted definition of historical revisionism is this: “… the re-interpretation of the historical record. It usually means challenging the orthodox views held by professional scholars about a historical event, or introducing new evidence, or of restating the motivations and decisions of the participant people”. Another is “a consciously falsified or distorted interpretation of the past to serve partisan or ideological purposes in the present” (Jenkins). But we may ask, exactly which, or whose “orthodox views” are we talking about?  Jenkins creates a dichotomy between the “traditional intellectuals” of academia who deal in “quasi-fiction” and are engaged in “whitewashing history,” and the working classes who deal in “reality”.   The intellectuals “protect the dominant ideology through a sophisticated presentation of revisionism”, and the working classes function as the “torchbearers of reality” who are “struggling to maintain actualities”. Needless to say, this kind of idealized and neatly defined juxtaposition is as fuzzy as it is debatable. On the contrary, it is a widely accepted view that academia is the wellspring of liberal ideology and that it is where challenges to orthodoxy originate. Recent events at Charlotteville have once again proved that. It was the liberal “intellectuals” gathered at the University of Virginia who wanted the racist monuments toppled and the reputedly “redneck” white supremacist working class who were there to defend them.

Then too the question is complicated by the conflicting demands of the diverse ethnic communities. Very often one community’s hero is another community’s terrorist. We recently had a disturbing glimpse into this cultural chasm. New York City Council Speaker Melissa-Mark Viverito campaigned vigorously for the inclusion of convicted Puerto Rican terror leader Oscar Lopez Rivera, not only to lead the Puerto Rican Parade, but for him to be awarded the Parade’s “National Freedom Award”, a  move that was seen as more than just controversial even within the Puerto Rican community; some saw it as an insult. While Lopez Rivera proudly declared that he felt good about being there, ”between bouts of pounding his chest and chanting ‘Que viva Puerto Rico!’”, one parade-goer felt differently: “This is a day for honoring the republic of Puerto Rico, not honoring a terrorist. This man has no place in our parade. He makes me ashamed to be a Puerto Rican” (NYPost.com, June 11, 2017).

This same Melissa Mark-Viiverito has been in the forefront of the recent protests  against Columbus, because as a self-styled proud Puerto Rican she firmly believes that, “ there should be no monument or statue of Christopher Columbus based on what he signifies to the native population . . . [the] oppression and everything he brought with him” (NYPost.com September 12, 2017).  All well and good, but we can well question this kind of cultural relativity that pits one community against another. This does not concern only the Puerto Rican community. We also need to ask: What does Columbus signify to the Italian-American community? Members of the Italian-American community beg to differ with Mark-Viverito. “Angelo Vivolo, president of the Columbus Citizens Foundation, told radio host John Catsimatidis on Sunday that efforts to review the statue’s place in Columbus Circle are an ‘outrage’ and an affront to all Italian-Americans” (Italian-American advocate slams…).  Furthermore one Italian-American speaking for many declares, “I don’t see Christopher Columbus as a symbol of hate. I see Christopher Columbus being a symbol of Italian American contributions to our nation” (Congressman wants to save Columbus statue…)

Practically speaking, historical revisionism is the re-interpretation of history as it has been written and perpetuated in past historiographical records. More to the point, it is a way of interpreting past events not in the social and moral context of their time, but in accord with the ever-changing contemporary values and mores. Thus, while a practice may have been acceptable in its time, at a later point in history it may retroactively be deemed to have been immoral or unacceptable in some other way. An example:  the ancient Egyptian, Greek and Roman civilizations, their wealth and their empires, were built on slavery. Not the racialized slavery of the American South, but a slavery that was almost exclusively the result of military conquest, regardless of the racial identity of the enslaved. This system was not questioned in its time, it was accepted as “normal”.  Yet by today’s standards it was a brutal and immoral system that we abhor. The past is full of ugly incidents and mistaken ideologies.  The question is, should we bury these or use them as cautionary tales to prevent a recurrence of the ugliness? There are many abominations that human beings should be ashamed of having perpetrated: the genocide that ensued when the Old and New words collided, slavery, the Holocaust, the bombing of Hiroshima and Nagasaki, to name just a few. Of course, the future will be judging us too, not according to our present value system, but according to whatever their own will be in the coming decades and centuries. They too will second-guess and possibly condemn our values and actions.

America (much like ancient Rome) famously known more for its pragmatism than its poetic sensibilities, has never been more attuned to the symbolism of public monuments. The question is: does erecting a monument automatically constitute a celebration of what it stands for? On the practical level, to topple the countless monuments and change the names of public places, institutions, parks, cities and even countries (Colombia as one example) that no longer represent our values  would be a never-ending and Herculean process. But on a more important level it would also be a denial of human history and who we have been in the past—warts and all. It would be an attempt to forget our transgressions of the past rather than to denounce their cruelty and learn from them. Would it not be better instead to keep the monuments as a reminder of the fallen ideologies of the past that no longer represent our supposedly more enlightened present? In a cogent and passionate discussion held in one of my classrooms just a few days ago the multicultural students were in surprising accord: we cannot and should not expunge the memory of the viciousness in history, we should keep it alive in order to condemn it for what it was and not repeat it.

As human beings we are irredeemably flawed. Christopher Columbus and other controversial figures are the very embodiment of our dual nature, poster children who can serve as reminders  of humanity’s sublime ambitions and sordid transgressions. Although we cannot achieve moral perfection, we can aspire to it. Tearing the monuments down is not the answer, it does not heal the wounds that have festered for a couple of centuries. We have the moral obligation of correcting the historical record, but we can do this in our history books, in our classrooms and in our public forums. Education is the answer.