The Standard Hotel, the Liberty Inn and the Pursuit of Happiness in Manhattan

In the Meatpacking District, that once exuded sex and drugs, next to the High Line, rises the hotel that draws everyone together

A tiny neighborhood sandwiched between what is now Chelsea and the Village, along the Hudson River of Manhattan, was at one point named after revolutionary General Peter Gansevoort, grandfather of Herman Melville (Moby-Dick). In 1886 it was declared a public market and called the Meatpacking District. It is hard to imagine that not much earlier, it was the bucolic Sapokanikan village, home of the Lenape Indian tribe of the Algonquin.

By 1900 about 250 slaughterhouses were located in the district and the highline elevated freight was commissioned in 1929 to better service this industrial area.

By the 1960s there was a general decline of the area and by the 1970s and up to the end of the 90s the Meatpacking district became the hub for drugs, prostitution, crime and the wildest S&M gay sex clubs in the city, operating under the protection of the Mafia, or subject to the corrupt protection of the NYPD.

Some pain, no shame.

Explore: the Mineshaft, a discriminating sex club that turned away Mick Jagger and Rudolf Nureyev, while letting in Vincente Minelli, Rainer Fassbinder and Rock Hudson; Hellfire, which was located in the basement of the famous Triangle Building in the meatpacking; and the Lure, where you could get pierced on stage “everywhere you want”, the Vault and the Zone DK and more. 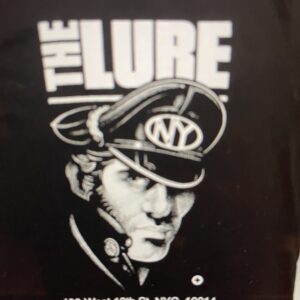 Everything sex was in excess, “vanilla” was not a flavor here. The dress-code: no cologne or perfume, no suits or ties, no designer clothes; it was more like an un-dress code with lots of pride but no prejudice, just come in, undress and leave all of your clothes in a garbage bag at the entrance. Pimps, prostitutes, drug dealers and butchers were your “friendly “neighbors. Even for adventurous Samantha Jones, living in the area above the Lure turned out to be a bit too much.

Then, in the wee hours of the morning, just out of a fancy lounge, a group of stunning models in Manolo shoes bumps into a group of blood-stained butchers clocking out of a nearby slaughterhouse—an intense sweet aroma of cologne mixed with the stench of rancid blood that covers the cobblestones of the street, et voilà! Welcome to the Meatpacking district, circa A.D. 2000.

Two worlds collide and bloody Mary took over bloody streets. In 2002, Samantha Jones struggled to be admitted to the just opened SoHo House club, with its exclusive rooms and roof-top pool. She was, in fact, just one of the too many Jimmy Choos and Louboutins flocking to the new hotels opening in the meatpacking district.

In 2003, the old concrete and white tile building that was originally the National Maritime Union of America and later a covenant house for drug rehabilitation also known as “the pizza Box”, for its oversized titanic-style round windows, was converted into the Maritime Hotel. It is a very stylish and very nautical hotel with its dark wood and white and blue tones it has the nostalgic mood of the old port.

On both sides of the Maritime Hotel, where the building gently curves into the street, a shiny silver armor was glued onto the facade, leaving just the big round windows out, and creating another hotel, Dream Hotel Downtown.

One after the other boutique hotels were opening, lounges, fancy restaurants like Pastis, Tao, Buddakan, and clubs like Cielo crowded the area and then, more hotels. In 2004 the first “urban resort “, the Gansevoort Hotel, opened up and hordes of festive “Bridge and Tunnel” crossed the river to the land of the Algonquin. Rooftop and pools started popping up everywhere from the Gansevoort Hotel to the Dream downtown, where the outdoor pool is also the ceiling of its lobby, so look up and meet the other sirens of New York City.

The Meatpacking district, the dangerous slaughterhouse of New York, the missing ring of Dante’s inferno, disappeared when Google opened its headquarters in the old Port Authority Terminal. Moreover, upscale stores and restaurants opened up in the former location of sex clubs like Hellfire and the Lure and the market went from selling pricey ribs to overpriced cribs.

It was not, however, until the opening of Standard Hotel in 2008 and the opening of the highline in 2009 that the transformation of the neighborhood was complete. At first glance you may think that the Soviet-style cement building leaning over the highline already existed but, sadly, it was purposely built that way– brand new. Let’s not be mean though, as we may say, it may not be pretty, but it has a “great personality” and, in this specific case, it sure did!

The Standard Hotel was created by André Balazs, a kind of “Ian Schrager 2.0” genius, who transformed the inferno-like dungeons of the meatpacking of the 90s into a sex-exuding Paradise hotel and club, as could be seen in videos in the elevator ride up to the elegant, gold-glitter rooftop lounge of the Boom Boom room, and from its all-black evil-twin night club, Le Bain.

Beautiful hostesses and waitresses kindly greet you at the entrance, wearing uniforms that leave nothing to the imagination, as much as the spectacular 360-degree views of Manhattan you have from the lounge. It reminded me at first of an updated version of the Rainbow Room. Everything was there to impress.  Even from the men’s bathroom the view was impressive.

While standing at the urinals, you could explore the New York view in front of you, or look up to the ceiling mirror and explore the view… next to you.  In the Grindr and Bumble era nothing should be left to chance, and to make sure you measure up to the occasion, a measuring tape is conveniently printed on the glass stall that separates you from your new next door friend.

So, the Grammies go to ….. Everyone!! Celebrities flocked to the Meatpacking district and, in no time, the Standard Hotel went Platinum. To count the celebrities at its parties you had to start in alphabetical order (and the sin never ends), Madonna teamed up with Jesus, her “ready to wear” boyfriend who DJ’ed in 2009 at the Boom Boom room, then, Jennifer Lopez, Katy Perry, Lady Gaga, Nick Jonas, Diplo, and Sarah Jessica Parker snooping around to make sure Kim Cattrall had already left. Wild celebrities, wilder parties, and the wildest elevator rides.

Running out of “celebrity free” space and apparently unable to “take it outside” of the hotel, Jay-Z famously picked a fight in the elevator of the Standard Hotel with wife Beyoncé’s sister Solange, while falling from Paradise.

At the Standard, nothing is private, not even your privates (!) as flocks of voyeuristic couples and self-sufficient evening guests share their love of the city in front of the floor to ceiling windows of their rooms. Meanwhile, at a Grindr party in the lounge, two floors of the hotel were left with the doors fully open for everybody’s convenience.

While bragging about no bras, about 18,000 of those have been hanging from the ceiling of the Biker Saloon Hogs and Heifers, since after the movie “Coyote Ugly”. Local guys on Harley-Davidsons used to line up in front of the saloon for 23 years until the Standard Hotel opened up its Bier Garten just in front of it, forcing the Saloon to close.

However, just across the street from the Standard Hotel, the real spirit of the Meatpacking District still lives on, hopefully for much longer than the Standard hotel itself, the Liberty Inn. The hotel opened in 1908 as a sailor’s boarding house. It was called the Strand, “accepted only men as roomers”, and was a very rough place from the very beginning.

In an old 1914 documentary, it was said that it catered “to the class of trade that has business from the river front”. It had its moment of glory when the New York Times rented a floor from which to report on the survivors of the Titanic. It is “the highest-rated” short-stay “romantic” hotel by the hour and, much like its fancy hotels nearby, it also had a night club, the famous Anvil, an after-hours gay sex club in the 70s and 80s. The Liberty Inn did not bow to gentrification and I hope it never will; after all, this is still the Meatpacking district, the place where nothing is created, nothing is destroyed, but everything is transformed.

Plaza Hotel: Its Rise, Splendor and Decline From the Great Gatsby to Trump’s Betrayals

The Duel Between the Plaza and Savoy Hotels in Grand Army Plaza at 5th Ave.