In a country that fought – and won – a world war against fascism, it is now considered treasonous to be anti-fascist: this is Trump's America

The recent worldwide demonstrations catalyzed by the police murder of George Floyd by police officers in Minneapolis — falsely conflated with incidents of rioting and looting in some cities — has generated a ferocious and purposively mendacious criticism of the Antifa movement. Unable to denounce the Constitutionally-granted right to peaceably assembly and free speech (although some have tried), the reactionary forces in America have constructed a straw man in Antifa. The Trump administration is now threatening to classify Antifa as a terrorist organization. In a country that fought – and won – a world war against fascism, it is now considered treasonous to be anti-fascist.

Antifa is only the latest iteration of an anti-fascism that has existed since the birth of fascism. While Italy has the shame of having spawned the first fascist regime, it can boast of having generated the first anti-fascist movement as well. Even before Mussolini was called upon by King Vittorio Emanuele III to be prime minister, there was a militant anti-fascism in the form of the Arditi del Popolo. Willing to answer the violence of the Blackshirts with violence of their own, they understandably received no support from the official organs of the Italian state such as the police, military or judiciary, and were repudiated by the supposedly revolutionary Italian Socialist and even the newly-formed Communist Party (although Antonio Gramsci was a supporter of its militant anti-fascism). But for Italian workers and peasants who were being terrorized by rampaging bands of Fascist Blackshirts who had the support of the police, the military and the judiciary   — and thus complete immunity – the Arditi del Popolo, with their roots in the vital tradition of Italian anarchism, represented the last hope to defend society from the fascist revolution.

At its peak in September 1921, the Arditi del Popolo could count on 20,000 members (mostly in the North) willing to confront fascist violence. Their anthem was explicit:

(We curb the violence / of the mercenary fascists. / Everyone armed on the Calvary / of human redemption. / This eternal youth / is renewed by faith / for the people who demand / equality and freedom.)

In the summer of 1922, as Mussolini and his fascists were preparing for the “March on Rome”, 350 Arditi successfully defended the city of Parma against 20,000 fascists. But once in power, the fascists systematically assassinated and imprisoned the Arditi within two years. One of the Arditi, the anarchist Gino Lucetti, attempted to assassinate Mussolini in 1926. The survivors were among the first to go to Spain with the International Brigades to defend the Republic against Franco’s coup d’état and joined the Resistenza (1943-1945) against the Saló Republic and the Nazis.

Militant anti-fascism was kept alive by the PCI and Giustizia e Libertà, founded by Carlo Rosselli, Alberto Tarchiani, and Emilio Lussu in 1929. Rosselli argued that fascism was something unprecedented on the political landscape and could only be confronted and defeated by active measures. He too, was among the first to go in defense of the Spanish Republic. After his speech over Radio Barcelona, “Oggi in Spagna, domani in Italia,” he was assassinated – along with his brother, the historian Nello Rosselli, by the French Cagoulard. Giustizia e Libertà was transformed into the Partito d’Azione during the Resistenza and could boast of members such as Primo Levi, Carlo Levi, Ferruccio Parri, Joyce Lussu, Piero Calamandrei, Natalia Ginzburg, Norberto Bobbio, and Ada Gobetti.

Antifascism was embodied in the Italian Constitution, promulgated on January 1, 1948 as part of the foundation of the new Italian Republic. But there persisted a subterranean stream of fascism and neo-fascism in Italy, culminating in the “Years of Lead.” Once again, Italy and Italians had to confront the moral and ethical dilemma of how to confront fascism. It was Holocaust survivor Primo Levi who, in a 1974 essay presciently warned, “Every age has its own fascism.” (Ogni tempo ha il suo fascismo). 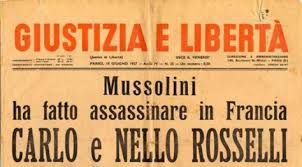 The denigration of antifascism began even before the Second World War was over. The assault on a German police battalion in via Rasella in Rome on March 23, 1944 which resulted in deaths of 33 soldiers, led to the Nazi execution of 335 innocent men and boys a day later, known as the Ardeatine Caves massacre. Some Italians blamed the Resistenza – not the Nazis – for the massacre, saying the reprisal should have been expected, even though the Germans posted warnings only after the massacre. In the postwar period, antifascism was tied to USSR through the PCI, and condemned by certain factions of the DC and the Catholic Church. And fascism – although officially outlawed by the Italian Constitution – survived in the MSI (Movimento Sociale Italiana) and later the Alleanza Nazionale. Today, it is firmly housed in the Casa Pound in Rome and the national Fratelli d’Italia party. Since anti-Semitism is no longer acceptable in polite company, the hatred has been displaced onto extracommunitari.

Transnationally anti-fascism and specifically Antifa were transformed by the rise of neo-Nazism in Europe in the late 1970s and 1980s. Punk rock concerts and culture was often the battlefield on which skinheads and anarchists confronted each other in those years. The fall of the Berlin Wall hastened the development of neo-Nazism in eastern Germany and other parts of Europe. The emphasis was on “direct action” which often meant violence. And violence has been the misunderstood aspect of Antifa ever since the postwar period.

At its most controversial, Antifa argues that society cannot permit neo-fascists and neo-Nazis the rights and privileges of a liberal society. Why grant fascists and Nazis freedom of speech and assembly when – if they were to come to power – they would deny those very rights to everyone else? Why grant them the gifts of democracy to destroy democracy itself? For make no mistake: the “very good people” marching in places like Skokie, Illinois in 1978 and Charlottesville, Virginia in 2017, are fully aware of what their movement has done in the past. They don’t have the luxury of arguing, as some in the Balilla or the Hitler Youth of the 1930s, that they could never have imagined the gas chambers and crematoria of Auschwitz. Today, these people know full well what they espouse. To put it another way, we know how this movie ends: with the death of millions of innocent people.

As Rutgers University historian Mark Bray, author of Antifa: The Anti-Fascist Handbook explains in a lecture at Dartmouth College, there has been a general reluctance for scholars and the general public to engage with the history of postwar anti-fascism. Anti-fascism is OK for WWII, when we were battling Nazi Germany, but just as anti-fascism was suspect before WWII, it again became suspect during the Cold War and the neo-liberal order after 1991. But the election of Donald Trump and the current political crises have generated a renewed interest in socialism, anarchism, anti-fascism and Antifa. A lecture on The Philosophy of Antifa  has been viewed by more than 1.2 million people online.

Attorney General William Barr and President Trump are trying to denigrate the massive national protests against the long history of police brutality against African Americans by falsely claiming that the protests are organized by Antifa. The Washington, DC office of the FBI, though, concluded that it sees no evidence of Antifa directing the protests and demonstrations. So either the FBI or the country’s President and Attorney General are wrong.  Senator Tom Cotton of Arkansas published an op-ed in the New York Times in which he argues that “Antifa terrorists” are responsible for the demonstrations and should be shown “no quarter” by the American military. Cotton, an Army veteran, surely knows that the military tactic of “no quarter” is a war crime. So continues the denigration of a movement that more than any other, takes an active stance against the political and moral horrors of fascism and Nazism.