My Most Vivid Childhood Memories, Circle Around One Small but Noteworthy Section of Brooklyn - Boro Park

Over the years, it has become a predominately Hasidic neighborhood, catering to Orthodox Jewish families. Streets lined with elegantly dressed women, men in black hats, children with hanging side curls streaming out of their yarmulkes, are a common sight. It is the home of one of the largest Orthodox communities outside of Israel. In addition, there has been an influx of Asian buyers who have added texture to the streetscape, with restaurants, florist shops & markets catering to their patrons. My last visit, coincidentally fell on one of the High Holy Days.

Families were out in force, in their holiday finest, and in spite of over 85 degree heat, men were in full regalia; dressed in fur hats, ¾ knickers with white silk knee socks, and layers of formal Hasidic attire.

I fanned myself, as they strolled by!

However, as a child in ‘mid-century’, the setting was quite different.

My memories are caught in a freeze frame, with streets, as they were. 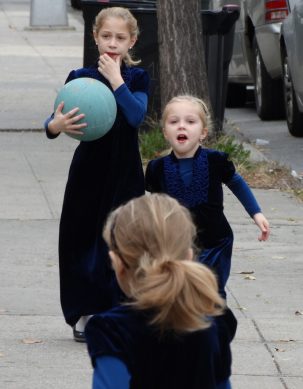 My apartment building, only 2blocks away on 15th Avenue, made shopping for daily supplies, a ritual. These Mom & Pop stores were our source for neighborhood news, including local gossip, birthdays & deaths; and an occasional divorce. Evening news was filtered through black & white TV’s with ‘v’ shaped antennas protruding from the top, most often accompanied by static. Coffee drinking was done in the privacy of your home or occasionally, at the local luncheonette perched on a stool at the counter.

Decades later, we are now consumed in an international caffeine craze, compared only to our obsession with health foods. Reading labels has become a national pastime, centering around organic/non GMO/gluten free/vegan diets; unheard of then. In my Brooklyn kitchen, a typical dinner often consisted of appetizing(smoked fish, cheeses, bagels) deli (cured meats, briny pickled delicacies, slathered with mustard and sandwiched in rye breads), meats (steaks, roasts)  dairy and other foods, high in cholesterol, and laden with calories.

Miracles exist, and it’s a tribute to a combination of genetic factors, that I am alive and well.

PS 103, where I began my schooling, was converted (no pun) into a yeshiva.

On a personal note Brooklyn’s resurrection has been nothing short of ‘stunning’… on a professional note; it’s been mind boggling.

In the 70s & 80s, sections, such as Park Slope, had suffered a deep real estate recession, transforming this elite neighborhood into an unrecognizable area. Original owners were forced out, as street crime ran rampant and home values plummeted. Magnificent brownstones sat vacant for years. One example, was my aunts home in ‘prime’ Park Slope. After my uncle died, she had tried(unsuccessfully) to sell. The house remained on the market far longer than she anticipated, until my father finally convinced her to cut her losses, and get out. Her 5 story brownstone, in immaculate condition, on President Street was finally sold/given away for under $40.000, {gasp} in the late 70’s. Many know that a comparable home in this prestigious section would sell for at least 4M, in todays market.

Park Slope is now one of the most highly sought after sections in Brooklyn. Further east lies Cobble Hill, another desirable slice of Brooklyn and the home of Veranda Park (aka Cobble Hill Park) one of the city’s small treasures, where music performances are held throughout the year. Real estate has more than doubled over the past 10 years, soaring to heights surpassing those in parts of Manhattan. Shocking for those of us who remember Brooklyn as it ‘was’. Since 2004, areas specifically Brooklyn N. have seen the biggest surge, partly due to the expansion of demographics. What was once considered the most dangerous borough in NYC, has become the most expensive & coolest. Bed Stuy (Bedford Stuyvesant) jumped 194% since ’04… the highest increase in the country. A 2BR apartment renting then for approx. $850 per month, rose to $2500, 10yrs later.

But the biggest change of all lies in the ‘elevated status’ of living in Brooklyn.

Which brings me back to Boro Park.

Many of the original brownstones & brick mansions are still intact, with impressive extensions accommodating larger families. These imposing homes line the side streets from 39th – 65th off 9th – 16th Avenues. Boro Park has remained (relatively) unscathed. Developers eager to tear down and rebuild, have not felt the need to destroy this old world landscape, allowing residents the luxury of enjoying their homogenous community. In spite, it has still not made the (most wanted) list of Brooklyn’s desirable destinations.

Many of Boro Park’s residents are in highly specialized trades; such as diamond dealers, furriers & bankers. Like many well healed New Yorkers, there is great pride in their real estate ‘investments’. Due to limited inventory, and an increasing demand for large family-sized homes, property values have increased at an impressive rate, although still not comparable to more ‘hip’ locations. For those in need of close proximity to synagogues, parochial schools/yeshivas and kosher markets, Boro Park is a good option. Its current diversity, including a mix of other cultures, as well as retirees, professionals, young families, are factors to be considered. It’s an easy 35minute commute on the ‘D’ train to Columbus Circle. The access to Prospect Park, and a short subway ride to BAM, the Brooklyn Museum, Barclays Center & the Botanical Garden, makes BP a well- positioned location, with a slightly more flexible yet competitive buying edge.

Going back in time, may be an idea, for those who are looking for a ‘Brooklyn’ address.

Special thanks to Wayne Burkey & Marta Maletz, Brooklyn specialists for their ‘insider’ info.