Going Back Home: Finding the Meaning of Our Emotional Connections

When Angelo and I began writing this column two years ago, we called it Modern Connections because we thought we’d be discussing the ways we observed people connecting with each other in our daily lives. Little did we know we’d be handed a pandemic as a background for such observations; connection took on a whole new meaning—and additional efforts—during the year-long lockdown and precautionary mandates. We could have called it “Moderna Connections.”

We’ve written much about the past year and a half and our observations of how our country, family and friends handled such unprecedented times. Most recently we wrote about returning to a “new normal” and how the pandemic has changed us. Our focus has mostly zeroed in on how, as humans, we need to remember just that—we’re only human and sometimes we need help. As a therapist, Angelo has offered strategies for choosing a therapist or model of therapy in many of our columns. We worked together for over ten years running a program that provided divorced parents access to their children, so being open to the challenges and particular needs of relationships was something we both had to understand and be able to facilitate. And as a writer and educator, I’ve always used writing as a way to make meaning of the world around me.

We will continue to write and observe and share, but for the next few columns, it might look a little different because Angelo has embarked on a trip. Not just any trip, but a journey back to Italy. It’s not that he hasn’t been back before; he’s made several trips back and I have been fortunate enough to go many times myself. We typically head to Muro Lucano, Angelo’s hometown and the home of most of his family. We typically stay for a couple of weeks and one wonderful time we stayed for more than a month, and each time we came back with a stronger resolve to spend more time there. In fact, up until a few months ago, we were in negotiations to buy a little casa so we could have our own place there. Unfortunately, the seller changed her mind at the last minute and we had to face starting all over. If we even wanted to.

That’s what makes this trip so monumental; a journey rather than just another vacation. Are the plans and dreams we once had still intact or has our new normal affected them? It’s not insignificant that Angelo is returning on what will be the 60th anniversary of his initial trip to the US—July 4th. (He always tells the story that he thought all the fireworks in the New York harbor when he arrived were for him!) As he has been preparing to leave, his brother Tony has been sending him old photos of that first July day when his family took him to the airport to fly alone to the United States. The pictures evoked long forgotten memories and emotions from so many years earlier, some so foreign that Angelo couldn’t quite put his finger on what was triggering such an intense response to getting ready to travel.

Of course, it’s harder to travel anywhere right now. The pandemic isn’t really over yet…as we write this, there is an advisory against nonessential travel to Italy and Covid-19 cases are at a High level. There are tests and forms and supplies to gather; forget making sure you have your favorite toothpaste or hair conditioner that you can never find when you’re in Italy—now we have to consider bringing masks and sanitizer. The airline has conflicting information about what is required to board the plane than the CDC or the Italian government sites, so Angelo got two Covid-19 tests, just in case. 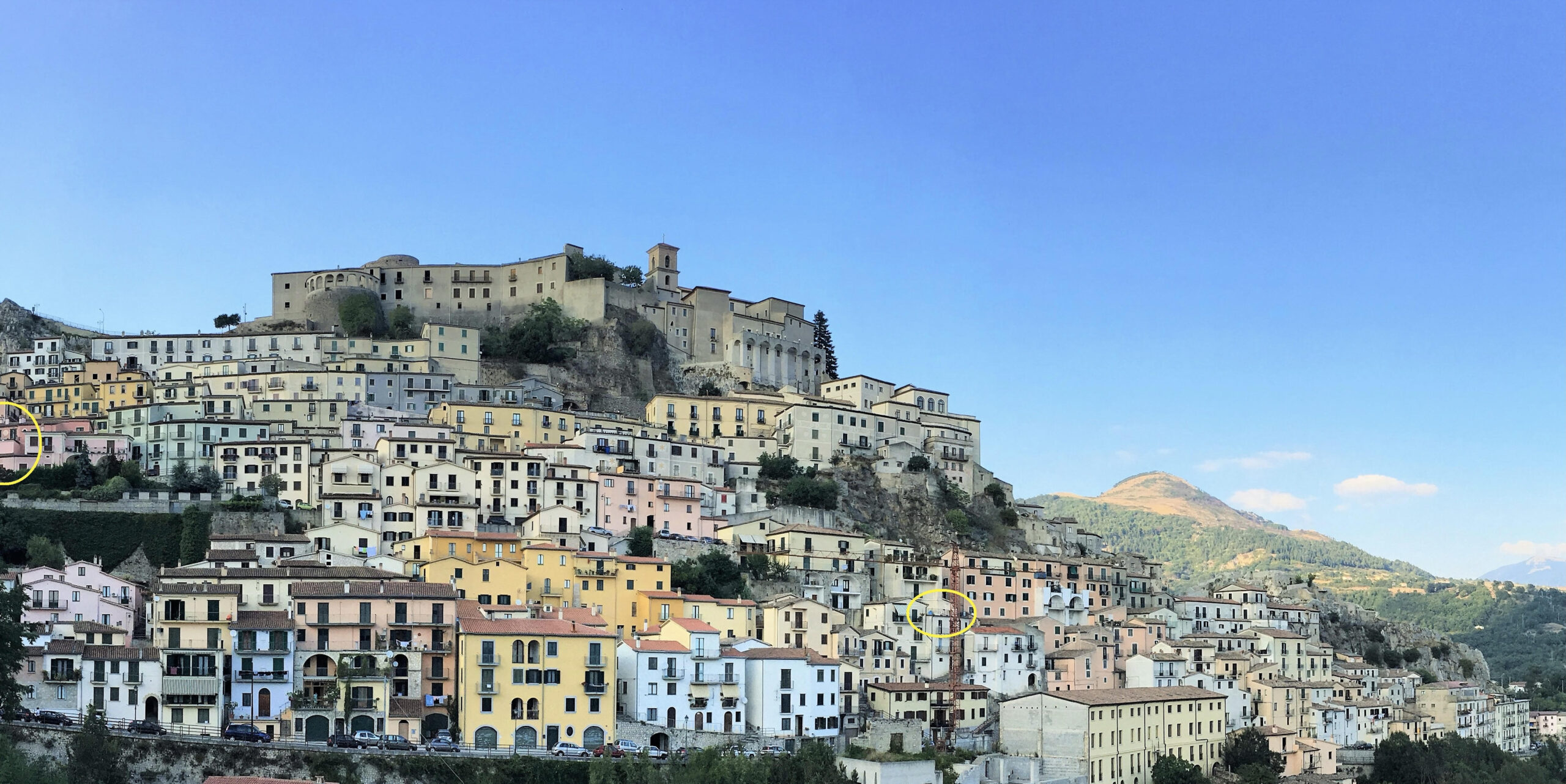 And then there is the matter of looking for a house—again. Is it a good idea? Our dream is that we’d find a small place in his hometown and be able to visit anytime, but also leave it for our children. We spent such a long time considering whether or not purchasing that particular home was a good idea (which we had already named CastelPiccolo—because it is a small house in Castelgrande) that thinking about finding some other house seemed like a betrayal of the love we already had for the first one. It isn’t like we need our own place–there’s always a bed and a meal available from a number of cousins for as long as we want.

For two people who consider themselves—if not experts, at least specialists—on relationships and connections, this trip is bringing up layer after layer of new and unfamiliar feelings and questions. For Angelo, his connections over the years between his Italian family and newly American family were frayed and rewrought due to long absences, little communication and a new culture. Since he left as a child and returned as an adult, the connections were reestablished rather than maintained. For me, I am not going with him—yet. Our plan is that I will join him in a few weeks or so, but we all know what happens to plans. I am a little nervous about the separation—it has been a long time since we’ve spent so much time apart. With so much unknown, I have to shore up my own independence and take care of things on this side of the ocean. So, for now, I will stay here in the US with an eye on airfares and next month’s column.  And possibly for month after that one. As for Angelo’s contribution, it will be as the time difference and navigating his journey allow.

Making connections is what we all do, what we yearn for, and what confounds us. Personal human relationship is the ultimate connection, but we find connections to concepts, pets, the arts and nature. A connection can be obvious or inexplicable; made in an instant or over time. Connection to others keeps us from feeling alone and absence of it is at the root of sadness and despair.

As Angelo and I observe our own connections over the next several weeks and/or months, you can be sure we’ll observe it, think about it, talk about it and share it. The issues that came up as we both prepared for this trip have surprised us and reminded us that there’s always work to do. We’ll continue with the goal of trying to discover how we all relate and connect to each other. Learning how to get along in this world–together or alone–is the one thing we all do alike.

Born in Connecticut and raised in Louisville, Kentucky, Cindy Eastman holds a Master’s degree in Education.  She has taught writing classes to students between the ages of 5 and 85 and is the creator of the “Day of Her Own” women’s writing retreat.  Cindy also works with families going through divorce as a supervised visit facilitator. Her first book, a collection of essays titled Flip-Flops After 50: And Other Thoughts On Aging I Remembered to Write Down, won the 2015 IBPA Ben Franklin Silver Award for Humor. She can be found in Connecticut, Maine or Italy at various times of the year and at cindyeastman.com.  Angelo Farenga is a Humanistic Psychotherapist with a private practice in Northwest Connecticut. He holds a Master’s in Counseling Psychology from Antioch University, New England. His interests in Spirituality and Self Actualization are combined with training in EMDR and IMAGO Relationship Therapy to help clients discover more authentic connections and healthy adaptations to the demands of modern life and social adjustment. Angelo was born and raised in Muro Lucano, one of the many small hill towns of Basilicata, Italy. He is fluent in Italian, loves good food, a wide range of music and spends his free time creating visual art and poetry.

Justice at Last, Ghislaine Maxwell Will Pay for Her Reprehensible Acts

Getting Personal and “TMI”: Are You Oversharing Your Life on Social Media?

Going Back Home: Finding the Meaning of Our Emotional Connections