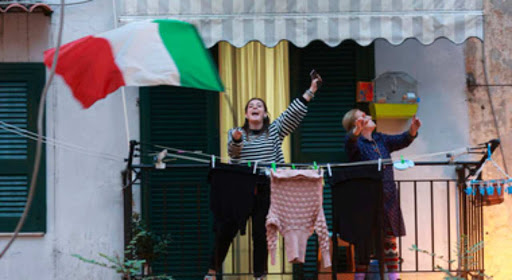 For the past two weeks, ever since Prime Minister Conte declared a national lockdown to keep Italians at home as the most efficient protection against coronavirus, every evening at 6 PM all over the country, citizens have been coming spontaneously to their windows or out on their balconies and terraces to sing the national anthem. Up to then the only times Italians had regularly done this was in stadiums’ grandstands before international soccer games.  On those occasions the majority of fans in attendance usually hummed along because neither they nor their beloved players on the national team know the anthem’s words.  After much criticism during the last World Cup in 2018, at least some of Italy’s players have felt obliged to learn them.

In these surrealistic days in Italy’s capital I’m one of those who has passed the cutoff age of 65, and therefore have not ventured out and am lucky to have a daughter who brings me all essentials and leaves them outside my door.

I, born in now besieged Manhattan with no Italian blood, felt morally obliged to tell the story of Italy’s national anthem to those who may not know it.  My own earliest encounter with the anthem was by way of a 33-inch vinyl Angel record of the Carabinieiri band.  It belonged to my brother who gave it to me when I married my Abruzzese husband more than 48 years ago.

“Il Canto degli italiani” or “The Italians’ Song” are verses written in 1847 by a young fervent Genoese patriot Goffredo Mameli, who supported Mazzini’s ideals.  They were set to music that same year by another Genoese patriot Michele Novaro. When I say patriots, I mean supporters first of the Independence of Italy from Austrian, French, and Spanish domination, and then of the country’s Unification in 1861, which Mameli (1827-49) didn’t live to see.

Especially during his last two years, Mameli frequently put his life on the line, first in Milan and then in Florence and Rome.  During the Siege of Rome in the spring of 1849, he was an aide to Garibaldi.  He was eventually wounded in the left leg and after a month, because of gangrene, and despite the amputation of his leg, Mameli died of sepsis.

Nonetheless, the “Canto” is best known among Italians as “Inno di Mameli” after the author of its lyrics, or “Fratelli d’Italia” from its opening line.  It was first sung publicly in Genoa on December 10, 1847 at the 101st anniversary celebration of a rebellion there against Austria’s past control of the city. The song remained very popular during the Risorgimento and in the following decade, but from then on, until two weeks ago, its  fate has been on an  almost never-ending roller coaster ride thanks largely to the changes in the various governments that have come and gone, and the extent to which the “Inno’s” political message and subtext coincided with their interests.

Mameli’s “Canto” continued to remain the de facto national anthem in spite of several parliamentary initiatives to make it the official one. This finally happened thanks to law no. 181 passed on December 4, 2017 in spite of continued and still ongoing attempts by the separatist political party, Lega Nord, to replace it with “Va, Pensiero”, an emotional chorus from Verdi’s opera “Nabucco”. One of “Va, Pensiero”’s strongest backers is Matteo Salvini, the beloved disciple of Umberto Bossi, the unrepentant corrupt founder of the Lega Nord. Nicknamed “Il Capitano” by his supporters for his hardline euro-skeptic, anti-immigrant, right-wing views, Salvini, former Deputy Prime Minister and Minister of the Interior,  is Prime Minister Conte’s  harshest and most vocal critic–together with Onorevole  Giorgia Meloni, leader of  the even more extreme far-right party, ironically called “Fratelli d’Italia”.  Sadly, in these very stressful times, when the majority of Italy’s usually individualistic citizens are miraculously obeying the Government’s lockdown, Salvini is loathe to relinquish center stage.

And now we come to my appeal to Onorevole Salvini to whom I say: “Follow the example of your fellow citizens working non-stop, no matter what their politics, to save the lives of others. Unlike you, the virus is invisible. During these terrible and uncertain times, stop waving rosaries and criticizing the performance of our Government, which is yours too.  Almost all of Italy’s politicians, except you and Onorevole Meloni, are putting their differences aside and trying their best to stop this pandemic. The Government’s handling of this disaster, certainly with no help from you or your similarly protagonist ally Meloni, is being followed as an example by many governments worldwide. Moreover, your lack of attendance in Parliament is disgraceful, not to mention that the previous governments in which you participated have reduced Italy’s otherwise enviable public health system to a skeleton. During the past month the 49 million euros your political party stole and, although found guilt by Italy’s top court two years ago, has yet to return to your fellow-citizens, could have bought a lot of medical supplies. Last, but most importantly, since until a few days ago you were seldom in attendance in Parliament, so I ask you: Che stà a fà a Roma? Especially since you’ve always called the Eternal City “Roma Ladrone”?  Perhaps you should return somehow to Milan, give back the stolen funds, and change your broken record to one of positive thinking: inventing and implementing projects for those in dire need.  Out of respect for all the doctors, nurses, ambulance drivers, teamsters, artisans, food deliverers, couriers, police, soldiers, and volunteers, to name just a few, who are all working hard to save the lives of others–often without the necessary protection which was partly your responsibility to provide-and in memory of Mameli and of all those who have recently died in your beloved Lombardy alone, without the comfort of their loved ones, please have the decency for once to go out on your balcony and sing ‘Fratelli D’Italia’.  But I ask you: do you know the words?”