There’s not a lot going on in small Italian country towns.  Or so one might think.  The beauty of life in Italy is that there are centuries-old traditions of finding ways to be together with your fellow humans.  From large cities to small, in every piazza there is always a passeggiata in the late afternoons before dinner, when young, old and in between come together outside to gossip, share news, see friends and family.  In my mind, it is one of the most profound differences between the U.S. and Mediterranean culture.  It’s why we bought a home in Italy, and it’s why we live in Brooklyn in the States, because though there is no piazza and no formal time everyone meets, on our Brooklyn block, we know our neighbors and all the merchants nearby.  It can take almost as long as in Italy to get errands done because we run into people we know and stop to chat.

But no one does it like the Italians and the Spaniards.  At the beach, the lettini and ombrellone are packed together with barely an inch between. No one gets on each other’s nerves and no one seems to mind –they’re too busy talking and making plans with extended family.  Same thing at the pool –there may be more space, but the Italians have pushed their lounge chairs close and don’t even bother to swim –they don’t want to ruin their hair, and they just want to be together. 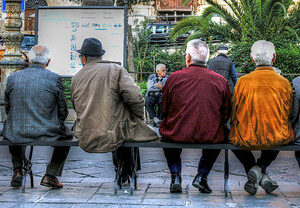 And so, small towns figure out their own entertainment, creating inexpensive ways for people to commune.  Bruce Springsteen may not be coming through town, and there may not be a cinema within an hour’s drive, but on summer nights in our town, there’s always something going on in the Piazza Belvedere, situated above the park. If it’s not a cover band making the small-town circuit, it’s a comedian, or a religious performance, a puppet show, or the students of the local music teacher in recital.  And if no one’s coming through town that night, the piazza turns into a giant outdoor bar where tables are pulled together for those sharing a beer and others stroll with their gelati.  On festival days, bigger, more expensive bands set up a stage in the more central Piazza Municipio, chairs are set up and people line the ledge of the church.  Every generation turns out, from the ancients to the youngest babies.

We first experienced this simple and entirely satisfying form of entertainment when we were in Lerici and I was pregnant for the first time.  I was eager to embrace the idea of family life, and as we walked along the water, we saw many families with strollers and young children gathering round what looked like a little circus truck selling tickets for a show called Pippo, Banane e Fagiolini.  We bought our biglietti and found this tiny troupe of clowning, juggling street performers utterly charming.

When we started traveling with our young daughter we quickly realized that entertainment listings were best found plastered to walls and roadside billboards.  Countless times we screeched the car to a halt and put it in reverse to get info on what spectacles were coming soon.  We were enthusiastic participants and attended outdoor performances of an excellent Beatles cover band at the beach, a puppet show of Pinocchio with rows of tiny plastic chairs set up for the littlest spectators, a children’s choir in the square in Amandola, our own town band in our town’s tiny jewel of a theatre, many clowns and buskers, and a brilliant troupe of comedic performers, complete with an ample mama (likely played by a man) and her somewhat dense son, Bisteca.  They accurately and hilariously captured the whole Italian mother/son syndrome. 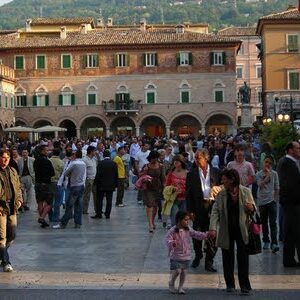 We hit the entertainment jackpot one evening on a visit to Communza where our friend Saranella said there was a good restaurant.  The town was a revelation.  The centro storico was ancient, the buildings off kilter, unkempt.  The centro was reached over a bridge with just a trickle of water in the streambed below during this particularly dry summer.  There was a three-star hotel in a square that was barely there, a well-worn church and a few flowers in the houses that were clearly occupied and tended by their owners.  But most of the old houses were empty, and the town had a musty smell of abandoned basements.  A friendly couple pointed us to the restaurant, which was back on the modern side of the bridge.  The town seemed to have shunted its history to the side in favor of a more modern version with strip malls (such as they are in Italy), gas stations, bars and pizzerie.

The meal was undistinguished, but when we emerged, there was a racket in the street, dominated by a half dozen souped up cars lined up with their sound systems blaring―evidently some sort of car stereo rally.  Further down the strip was a stage set up with plastic chairs surrounding, every seat taken by a beaming grownup.  The disco music competed valiantly with the cars and as we drew closer, we saw about 12 5-6 year old girls in pink butterfly costumes–  tutu’s, antennae with little pink puffballs on the ends and little wings on their backs―doing suggestive wiggle dances to the music, which had a vaguely Latin beat.  They were adorable and incongruous.  When they finished their number, after thunderous applause, four young couples of about 12 years old, appeared on the stage in formal ballroom dance attire.  They were astounding with their elbows pointed skyward, their backs arched and heads in attitude.  They began with a waltz and moved to a mazurka.  They were serious, but with the carefree smiles they were surely taught to wear to show their enjoyment and the effortlessness of their dancing.  They were enchanting.

As we walked further down the promenade, we came to yet another musical world where, in front of a bar, eight adults in folk costume were performing what must have been traditional Balkan dances.  They were jovial and spirited, arms entwined to music that initially sounded like Mariachi music, but on listening closer seemed gypsy or eastern European.

On the way back, we passed an even tinier village, just a hamlet really, in the midst of what must’ve been a Hay Fest.  Cars lined both sides of the road and people were gathered in front of some sort of shed that during the day likely sheltered farm equipment.  There were long tables, so certainly food was being served, and at the entrance to this small stretch of road, were two gigantic “dolls” fashioned from those rolls of hay you see in fields all over Italy.  These had big smiling faces, male and female, made with some kind of round plastic lids for the eyes, and pieces of canvas shaped into suspenders, a hat for the man and a scarf for the woman.

The beauty of this small town life, to us, as outsiders, is that people will find a way or any excuse, to be social with one another.  They are drawn to each other in all the traditions they share, going back centuries.  The people we know in small town, rural areas are by no means unsophisticated.  Despite spotty wifi, they’ve all got cell phones, computers, televisions, live streaming, and are entirely up to speed on current events.  But it doesn’t rule their lives.  What rules is family ties, relationships with their friends, playing bocce every night in the park with the kids you went to kindergarten with.  We envy and admire this connectedness, and though it can seem clannish and exclusionary to us foreigners, we are gradually starting to be accepted.  We’ll never know those deep ties, but we love being in its aura and we feel lucky to be part of it, even if just from the sidelines.