We’re foreigners and though we’ve had a house in Italy for ten years, there are so many cultural idioms we will never understand.  And so many we find entirely enchanting...

We’ve been visiting our town of Penna San Giovanni in Le Marche for about 13 years now, and we’ve had a house in the town for almost ten. Because we’re still there only for vacation, and though those vacations are getting longer as our work and family commitments begin to wane –giving up jobs; daughter in college– still we find so much about Italian life inscrutable.  On the other hand, we love the culture so much and find so much of it delightful and wonderful –it’s why we opted to settle in Italy in the first place. Here are some of the things we will never understand.

Our town attracts many British and Dutch families who, like us, have bought and restored homes mainly used for holidays.  We think we’re the only Americans who have settled in our town, and we take great pride in having been labeled “gli Americani.”  One of the things that makes us most proud is the diversity of our friends who visit us there.  They represent the variety of ethnicities that in our opinion makes America great.  They have interesting jobs –lucky for us Americans since our economy is relatively robust and there are far more options.  The contrast in employment opportunity is stark, especially in small town Italy where economies are struggling.

So if we’re the interesting Americani with cool jobs and friends, how come after all these years we still get the evil eye from so many Italians?  The old folks sitting at the bar and strolling in town still peer at us as stranieri (strangers) in every sense of the word.  Internally we’re shouting, “Come on –you’ve seen us before!  Make a little room so we can get into the bar for an ice cream!”  No way.  Still doesn’t happen. And when we drive slowly through town so as not to run over any anziani out for passeggiata, the old guys still glare at us. They’re looking to see if we’re friends of theirs, but still lazer us that vibe that says, ‘You don’t belong here.'” 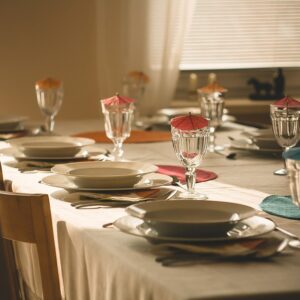 Now why is it that when Italian friends drop by unexpectedly, or even come over for dinner when invited, no one will sit down despite our exhortations to “si accommodi!”   We love to hang out for a while before dinner, have an apertivo, munch on some patatine and olives.  But no one will sit down until all the guests have arrived and everyone sits at the table.  Our friend Pasquale marveled when he visited us in the U.S. on the day of our summer barbecue that all our guests were milling around, eating, drinking, talking, working the party, some arriving early, some late.  He told us this would never happen in Italy — there, all sit at the table at once, only when all the guests have arrived, and eat their four courses together.

We don’t understand the elderly contadina we once saw walking on a country road at twilight with great determination, carrying only her flyswatter.  Did one get away that she was determined to kill?  Where was she headed?  Toward her house, or away from it?

Ice.  What is the big deal about ice?  Nowadays, everyone’s frigorifero has a freezer to it and all you need to do to make ice is fill up an ice tray with tap water and put it in the freezer.  But in all the bars, the ice comes in some plastic sheet pre-fab’d who knows where, thus making it somehow precious and making more garbage in disposing of those plastic sheets.  When we stopped in an upscale housewares store at the beach to buy a new ice tray, we could only find a weird rubber thing that has to be turned inside out to extract a cube.  It’s an unbelievable nuisance.  The Italians who are known for their elegant and practical design– just look at how many beautiful coffee makers one might buy– can’t figure out an ice cube tray?

There are rules that brook no deviation.  Lunch is at 1:00.  There can be no argument.  The entire country stops at 1:00 and eats.  Generally at home, generally with one’s family, and generally cooked by mamma. How working mothers manage this, we don’t know. When we’re traveling and 1:00 rolls around, the roads empty, traffic disappears and the autogrills fill with demanding Italians, crowding around the panini cases, pointing, paying, ordering caffè, clustering around the tall-boy tables.  The bariste are miracles of efficiency, remembering everyone’s orders when people are four-deep at the bar, checking scontrini, joking with each other, and by the way, making superb coffee. 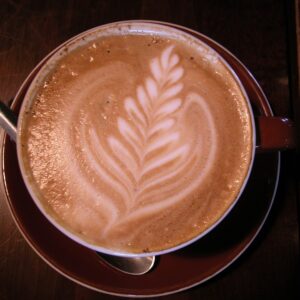 As for coffee, no cappuccino may be consumed after 11:00 am.  To do so pegs you instantly as a tourist. Cappuccino adds a lot of milk and air to a caffeine-rich espresso. It’s meant to wake you up, fill you up and get you through to lunchtime. After 11, you may have an espresso or a cafe corretto (“corrected” or spiked with anisette or some other alcohol), or if you insist on milk in your coffee, you may have a macchiato –an espresso with a small blob of foamy milk on top.  But cappuccino after 11 or God forbid after dinner, borders on criminal.

Now here, on the other hand, are some rules the rest of the world would be well advised to adopt.

Get rid of inventory that won’t sell anyway, thereby securing the undying loyalty of your customers.  What fruttivendolo in Italy doesn’t throw in a little regalo or gift after you’ve bought two bag’s worth of fruit and vegetables?  Nicoletta, who I buy from most often in our town and neighboring towns where she and her nearly twin daughters work the markets, almost always gives me a few extra plums, or a lemon, or a bunch of basil.  One vendor I bought from in Macerata had prepared for his customers little bundles with a carrot, a stalk of celery, a bunch of parsley, and a parsnip —“per una zuppa, signora,” he said, smiling and stuffing these little extras into my bag.  The plant guy at the market usually gives me a few bonuses after I’ve paid.  They’re usually half dead, but sometimes I can bring them back to life.  And even though he’s giving me dead plants so he won’t have to pack them back in his truck, I think he’s nice.

Take Care of your Sidewalk

Sweep up in front of your house or store.  It’s always a shock to come back to the States after having been in Italy and see how dirty it is here.  True, we live out in the country in Italy and in the big city in the U.S. But even in Italian cities, shopkeepers and residents can be seen every morning sweeping up bits of trash and hosing down their sidewalks, washing their store windows, shooing soot off the awnings and taking a feather duster to product displayed outdoors.  Why can’t we do this in America? 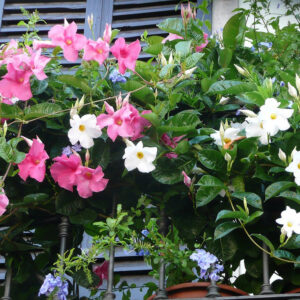 There are plants and flowers everywhere in Italy.  In small town Italy almost every house has potted plants and flowers around the doorways, on windowsills and in window boxes.  They are well cared for and trimmed.  Along the country roads, almost every house has a garden in front with shrubs, trees, flowering plants.  In apartment buildings, geraniums spill over the railings of balconies and terraces and bougainvillea hug trellises around doorways.  Even at the airport as I’ve sat on the plane sadly looking out the window waiting for takeoff, I’ve seen big potted plants that some employee has tended where the terminal building meets the tarmac.

In the farmacia, when you buy something small, it’s generally neatly wrapped in nice paper with the pharmacy’s logo, so that even your throat lozenges feel like you’ve gotten a little present.  When you buy cut flowers or a plant at the florist, they are usually wrapped in stiff tulle with ribbons so they always look pretty.  And anywhere you buy a gift for someone, it will be wrapped stylishly with raffia, bows, nice paper.  The idea of charging extra for giftwrap? — not in Italy.

Get to know your neighbors and share earth’s bounty.  The reason we love living in Brooklyn is that it’s the place in America that we think is most like Italy, which is to say, we know our neighbors and shopkeepers. It’s rare in Italy for someone to drop by without bringing something from their garden or something they’ve made. I’ve written before about that ever-circulating jam, and tomatoes are a close second.  Peaches, pears, eggplant, grapes, potatoes, plums, lettuce –people grow things out in the country and eagerly share the riches.  You totally hit the jackpot when someone brings you homemade wine or oil.  Nothing can compare.  Pasquale’s mother bakes empanada-like pastries at Easter filled with ricotta, raisins or chocolate.  She also makes soap infused with lavender and orange.  At Christmas, she makes this dense torta, almost like dreaded fruitcake in America.  Her children seem to hate it, but I love it with a cup of tea. I always feel privileged to be the recipient of her bounteous industry. To me, it feels like the epitomy of friendship to share what you’ve made or grown with those that live near you and share your same landscape and surroundings.

Italy is steeped in tradition, and as foreigners, it will take us years to comprehend the rules.  But what a remarkable and entertaining journey!  We love every step of the way.

Max Gazzè on the road in America

Max Gazzè on the road in America