The Boars and the Bees in Le Marche

How we got to know wildlife in the Italian countryside

We’re city folk.  I grew up in the suburbs, but have lived in New York City since I was 22.  My husband Jesse grew up here in Brooklyn.  When we bought and began to renovate an old farmhouse in the countryside of Le Marche region, we didn’t really think much about the animals that had lived there for centuries before we came along.  Our house had been built in the 1700’s and hadn’t been inhabited for nearly 50 years when we bought it.  The old saying, “Nature abhors a vacuum,” is really true.  There were gnarly vines growing on one side of the house, into the windows and doors, up the trunk of the giant oak tree on our land.  There were bats, bugs and lizards in the house before we began the renovation.  As our building contractor pointed out to us, all these creatures were here long before we were and breaking them from the habit of their happy home would be a challenge.

The first time we actually stayed in our house, it was a muddy, post-construction site.  We had not done any landscaping.  Wanting to keep all that dirt outside, I left my favorite fisherman’s sandals outside the door to the kitchen when I came in for the evening.  The next morning, one shoe was missing.  Who would steal one shoe out in the country?  The fox, that’s who.  We searched all around the house, down into the woods, and over by the pig house.  Ten years later, we’ve never found the missing shoe, but I’ve kept its mate, just in case either the fox brings it back, or we find it buried in a hole somewhere around our property.  The fox shows up every once in a while.  He’s a baby and pokes his head around the corner of the house at twilight time.  He can’t believe we’re sitting there on his patio having an aperitivo and he stares at us for a while before scampering off.

After the house had been renovated and we’d been staying in it periodically over the past year or two, I was surprised one spring morning as I walked up the driveway to go into town, by a silver Mercedes inching down the drive. A nice British couple, Paul and Jill, stepped out of the car and introduced themselves. They proceeded to tell me the story of how, just three days ago, they’d removed an enormous beehive from our house that was lodged in the space between the shutter and the door to the terrace in our bedroom.  I’d wondered what those odd hexagonal marks were on the glass door– beeswax!  Evidently, one of our engineers had been around the house and noticed the bees going in and out around that door.

Saranella tried without luck to find a beekeeper who could remove this hive and then asked our building contractor for advice.  He suggested Paul, his next-door neighbor, who had taken up beekeeping when he retired to Italy.  Lucky for us he’d agreed and began the complicated dance of confusing the bees with smoke, and luring the queen out of the hive so the others would follow her, transporting them and re-establishing them on Paul’s property with his other hives.  Eight kilos of honey he harvested from this venture.  We were dumfounded.  If not for him, I would surely have arrived to a stuffy house, unknowingly thrown open the doors and windows to get some fresh air, and ushered hoards of bees into our bedroom.

You know that waggle dance that bees do to tell their friends there’s an interesting home nearby?  Well the genetic code for our house must’ve been in the DNA of these bees who’d likely lived in that house for two centuries.  They returned a couple years later to the same spot, despite Jesse’s stuffing the spaces between the shutter and the outside wall with a rubber gasket.  This time Jesse was by himself in the house.  Paul had sadly 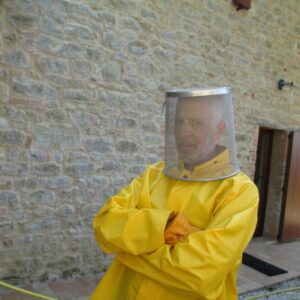 passed away.  Jesse called several beekeepers nearby and only found one willing to take us on– the son of the carpenter who had built the mantle on our fireplace.  Stefano came and took the bees, but a number of confused compatriots remained, trying to get back into their/our home.  Jesse’s makeshift beekeeper’s outfit consisted of a bright yellow rain slicker, rubber mud boots, jeans and an overturned mesh wastebasket on his head.  Armed with a lethal spray, he managed to subdue the stragglers.  Stefano returned a few weeks later with a one-liter jar of the most aromatic honey.

The next infestation occurred just last summer, this time these huge, ugly hornets– calabrone—  took up residence in our chimney.  We were finding their carcasses all over the house and couldn’t figure out where they were coming from.  It was Sophie, with her sharp 17-year old ears, who said, “Dad, the chimney’s buzzing…”  What to do?  We asked Pasquale who said we’d need to call the fire department– only they had the proper equipment to dislodge the cement-like hornet’s nest from the chimney.  But first, Jesse thought he’d try to smoke them out and built a fire in the fireplace.  Smoke filled the living room since their nest was just about blocking the entire chimney.  The firemen came next in their smart uniforms– it was their third hornet call of the day.  They donned their protective beekeeping gear, got up on the roof, sprayed the bugs and extracted the nest.  One, two, three, it was done.  They were awesome.

There are several other species that have lived at our house way longer than we have and we try to coexist with them.  We have a bat.  His name is Bruce.  He lives under the eave on the second floor terrace.  We’ve put up a bat house on the oak tree a ways from the house, but he seems to like it where he is.  Aside from cleaning up after him every day, we think it’s good to have a bat around.  They eat mosquitoes and they’re cute– like a little flying chihuahua as our friend James says.  You just have to be careful they don’t get into the house at night.  If they accidentally fly in, you’ll be chasing after them with a broom for a good half hour.  There’s also a large bird, maybe a hawk? that nests in the niche outside my bedroom window.  These niches were made in the old houses for pigeons to roost.  I always try in the spring to remember to leave that shutter closed so as not to disturb the mama bird and the youngsters in her nest.

I’ve only once had a wild boar sighting.  It was early morning late in the summer.  I was in the bathroom around 8:00 AM looking out the window, and a whole family of them– three grownups and five babies– was trotting along the edge of the field in front of our house where it borders the woods.  They haven’t really bothered us yet, except to tear up a hosta or two.  When we finally plant an orto, we expect they’ll show a lot more interest.  But the hunters in our town are crazy for them.  One summer, one of the hunters I recognized from the bar, drove down our driveway, came near the house, clapped his hands loudly  (I guess looking for pheasants?) and then left without even saying hello to me or telling me what he was doing.  I was a little offended by his presumptuousness, and we’ve only once seen the hunters in action, guns in hand and clad in camouflage.  We know they hunt on our land– there’s evidence in the cigarette butts and empty shells left behind.  But since we’ve not been there during hunting season, we haven’t minded them and like to think they keep an eye on our house while we’re away.  Once Guido, a jovial guy we chat with at the bar who also hunts, came by to give us a half dozen frozen cinghiale steaks to thank us for access to our land.  I made an excellent ragu from them and wished I’d had time to try more dishes with this gamey meat.

Domestic animals have their own interesting tales to tell in small town country life.  Most of the dogs in our town are descended in one way or another from Tartufo, a squat little beagle-mix with pointy ears and a happy-go-lucky gait.  His main wife, in the bigamist hierarchy, is Luna, a loving mutt with a constantly wagging tail, always pregnant, who wants nothing more than that you rub her belly and scratch her ears.  The cats down the road have their own little barn and a beach umbrella to nap under when it’s really hot in summer.  We like to go feed them.  They are a threesome– the all dark one is shy; one black and white is friendly and swats his more timid brothers away from the food; the other black and white is cross-eyed and looks at us in total confusion.  They like commercial cat food, but boy do they like spaghetti!  Licked that container of leftover pasta clean the day before we left to come back to the States. 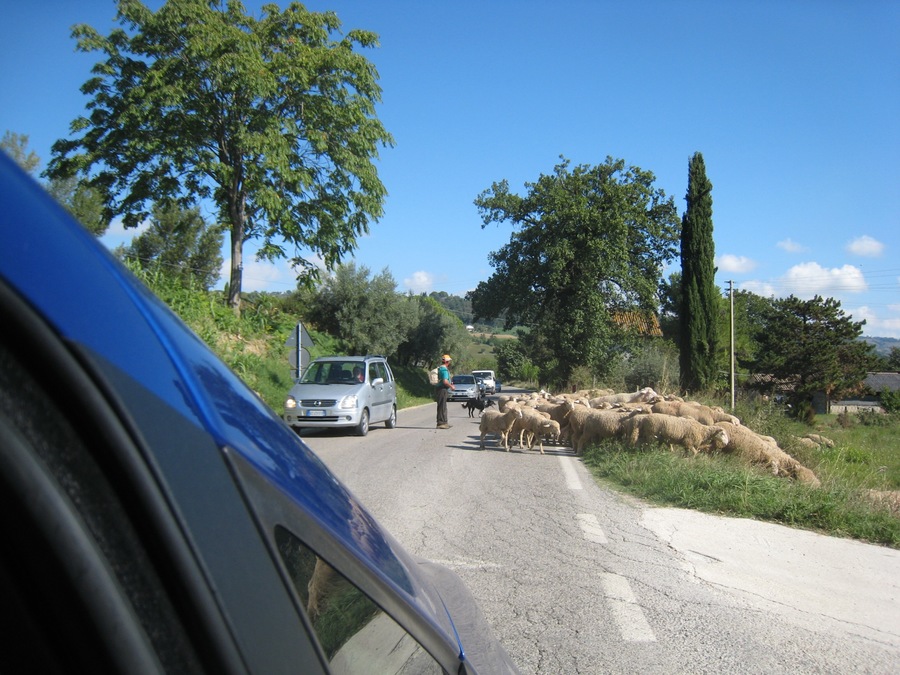 We’ve seen porcupine and moles on the road at night.  The deer nearly killed our fruit trees by eating off the bark at just about their head level.  But one of our favorite animal incidents was the herd of sheep crossing the road to our town.  We were coming home from the beach just as the sun began to set and a noisy herd of sheep, bells a-clanging, was trotting along the road, traffic stopped in both directions.  Thank goodness we were just heading home for a shower and not racing to the airport.  These sheep were in no hurry despite the best intentions of their shepherd– curiously poking around the roadside, the fields, the neighbors’ front doors.  We were delighted as we waited 20 minutes for them to move on.  The beauty of being close to nature– it’s truly a gift.