The "convivial" promoted the re-opening of NY restaurants and welcomed Consul General Di Michele and Director of the Italian Cultural Institute, Finotti

The dinner was preceded by a video sent to all the members of the Accademia Italiana della Cucina and guests, from a restaurateur/friend of Philip Guardione, Giovanni Ardizzone, owner of  “Da Nino,”  in the town of Letojanni, located next to Taormina. Ardizzone shared some typical Sicilian dishes and showed admiration for his friend who has brought their traditions and culture to New York.

The evening was in honor of our new Consul General, Fabrizio Di Michele who gave a great introductory speech focusing on the spirit of conviviality and its importance in our culture extended through shared experiences. This was one of his first dinners in New York with so many people at one table. He even shared a humorous anecdote on the subtleties of Sicilian language where “arancino” in Catania is called “arancina” in his native Palermo, explaining the rivalries that exist between cities protecting their individuality.

We also gave a warm, yet official welcome to our new Director of the Italian Cultural Institute, Fabio Finotti who gave a compelling speech: “…we learn a lot about our culture right at the dinner table…” he said. So true on this particular day. In fact, just that afternoon Governor Cuomo had lifted all dining restrictions, making it the perfect opportunity to have all the guests sit at the same long table—in the true Sicilian way.

“Simple plates, but big ingredients; with a maximum of two to three ingredients used in each dish”. Phillip Guardione, owner and Chef of Piccola Cucina Uptown, commented. “Feel at home, MY  home” is a running theme for all his restaurants. His “team” is an extension of his family.

Regarding his ingredients–such as shrimp and orata (sea bream)–he mentioned that they come directly from Italy and Europe on a daily basis, making his dishes both authentic and fresh.

He explained that Mount Etna is the most active volcano in Europe and that volcanic soil gives special energy to the plants, which in turn give the wines their particular characteristics.

After a brief introduction of his staff, he talked about the fact that all members are trained by him.  “Everyone started their career with us…no one was in the industry prior. I want everyone to learn from the ground up and understand our mentality.” Philip continued  with, “everyone thinks our cuisine is easy, but it’s complicated when you’re using only 2-3 ingredients.”

“My secret here–said one of his servers–was to LISTEN! First you listen and learn, then you speak.” Everyone at Piccola Cucina is truly a team player and it is a wonderful thing to see.

The dinner was a great success, so much so that guests stayed well past the scheduled closing time. The courses received high marks from all Accademia members.

The salmon spaghetti dish was quite delicate, while the “fritto misto” was very light and not greasy, definitely one of their most popular dishes! 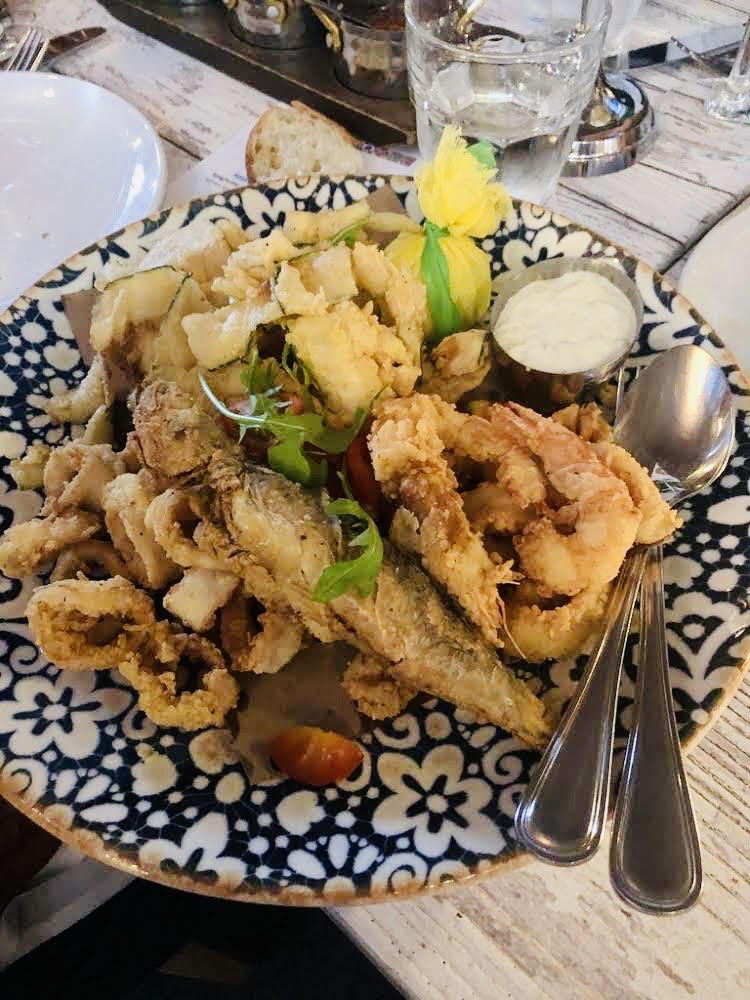 They also prepared grilled sardines, a dish that is hard to come by in New York City, and so good even those who are not fans of sardines in general actually tried them and liked them.

All portions were abundant and shared family style for two.

The pasta was delicious and made in-house and the dessert was lemon cheesecake presented in the form of actual lemons.

“Despite the issues being faced by restaurant owners today in finding staff, you certainly didn’t feel that at our table.

Great, attentive service all around” Lucy Falcone, Secretary of the delegation and a committed member of the Accademia observed.

Service scored very high on our scale, which is not always the case especially when serving so many people with so many dishes.

After the difficult year for everyone in the industry, as well as the Accademia not being able to hold Conviviali (other than virtually), this night could not have been a more positive reminder that New York is truly coming back.

We were all honored to be there and witness the return to normal. Up close and personal, the Italian way.