Tfor: diving in the Mediterranean without leaving NY

Raw fish, mixology and Italian classics in the fusion-style menu of this new Village restaurant

Tfor is a new culinary experience which arrived to the Greenwich Village this March, at 14 Bedford Street. The “T” in Tfor stands for tartare, the undisputed star of a Mediterranean style menu, in which tune, beef, oysters, caviar, sea urchins and homemade pasta are accompanied by flavorful ingredients, like the Pantelleria’s capers and Bronte’s pistachios. To complete this fusion style menu, a long list of cocktails according created by mixologist Luis Barcena.

Owner Tommaso Roncari, who run a restaurant at the same location for two years, opened this new place with a clear concept in mind: “With Tfor I wanted to bring to New York the taste of the Mediterranean raw food through a full experience that mixes the flavor of the sea with the Italian classics and incredible mixology – he explained – When I opened my first restaurant, my ideas were still in the developing process. After two years, I felt the need for a change. The concept at the basis of Tfor is raw elegance. Tfor is exactly the kind of place I love to go to.”

For this quest, Roncari welcomed to his team chef Stefano Crialesi and chef Riccardo Di Rocco, who worked long together as restaurant startrupper. Scalco, a refined restaurant located in the luxurious ski resort in Verbier, Switzerland, was indeed born out of this magnificent union. Crialesi was trained at ALMA, Gualtiero Marchesi’s International School of Italian Cuisine, and, before coming to New York, he was the persona chef for Vittorio Emanuele and Maria Doria di Savoia – the Italian royals – in their winter residence in Gstaad. Even President Obama tasted his recipes: for two years Crialesi was executive chef at the JW Marriott Ihilani Ko Olina Resort, the hotel in which the former president used to stay when visiting his birthplace.

Riccardo Di Rocco worked in different famous restaurants in London and it was at the Gherkin (the restaurant at the top of the skyscraper designed by Norman Foster at 30 St. Mary Axe) that he met Arnaud Stevens, who later became his mentor. In London, Di Rocco also worked at the Number 5, owned by the Brunei sultan, and in many other Michelin starred restaurants. 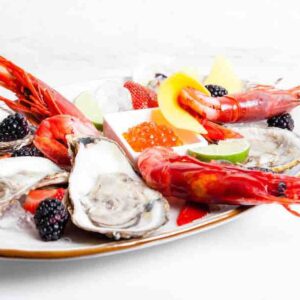 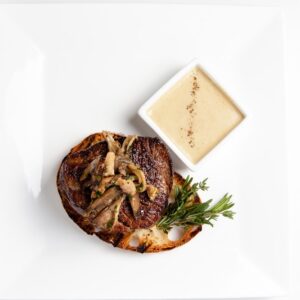 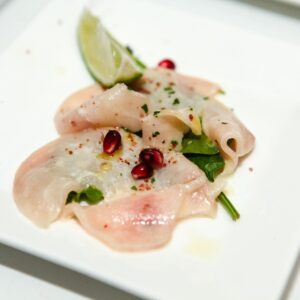 “The idea is to combine in a unique menu all the Mediterranean flavors, from Sicily to Provence – explains chef Crialesi – It’s all in the ingredients: we use prawns from Sicily, yellowfin tuna from Trapani, sward fish from Mar Tirreno, capers from Salina and Pantelleria, pistachios from Bronte (protected by the Slow Food stronghold) and the tonnarelli – a type of homemade spaghetti.” Some of the recipes are directly inherited from Sicilian grandmothers; however, being both Romans, the two chefs decided to include some recipes of their own traditions in the menu, like the Jewish-style artichokes, a typical recipe from the Roman Jewish ghetto.

However, the real star of the menu is raw fish. “A lot of people don’t even realize, but raw fish is a very traditional way to eat fish in Italy – tells us Di Rocco – in the past, in a lot of seaside resorts, especially in Sicily, fisherman used to eat the freshly caught fish directly on the boat, and they would know how to clean it and season it. Then, once back to the shore, they would share it with their families and the locals.”

The menu also includes some raw-meat based dishes typical of the North of Italy, like the beef tartare and the carpaccio with arugula. Once again, the recipes draw from grandma’s cookbook, but this time we are talking about grandmas from Piedmont.

Owner Tommaso Roncari also brought one of his other passions to this place: the Franciacorta, which is represented through five different types in the wine menu. “It’s a challenge for me: I hope New Yorkers will get to know this amazing sparkling wine, produced following the traditional Champagne method, and will fall in love with it as it happened to me the first time I’ve ever tasted it. Also, it pairs perfectly with raw fish,” he stated.

Fed Raises Rates By Only a Quarter Point, But Warns Inflation is not Tamed Yet