Turkey is a fascinating country with various cultures: Eastern Mediterranean, Southeastern European and Central Asian, all were originally brought together by the Ottoman Empire. Trip Advisor ranked Istanbul, one of the most famous cities in Turkey, as the “most popular travel destinations in the world” in April of 2014. Istanbul is a vibrant city that embodies both the ancient and modern worlds; it is artistic and chic with fashion, food and art, offering something for everyone.

But recent terrorists’ attacks have hurt tourism in Istanbul and Turkey as a whole. Even though the chances being attacked are slim, the fear mongering on TV helps to accomplish exactly what the terrorists want – to financially cripple the good, local people. It happened to New York City after 9/11 – people were afraid to come here, knowing that we were such a target. But it was important for the world to see that we were still the same old New York City except for some slight changes of how we handled certain daily tasks: such as keeping eyes opened for abandoned packages, having more security checks in major buildings, etc. – those changes still remain intact today.

And so, in a way, I feel New York City has a kinship to its major metropolitan cities such as Istanbul and the capital Ankara.

It was with great pleasure that I met a female Turkish wine producer, Ardıç Gürsel of Vinkara winery, in New York City a few weeks ago. The experience was also highlighted by a tour of the new Marmara Park Ave Hotel, in Manhattan, which is part of the already well established luxury chic Marmara hotel group in Turkey that were founded by Gürsel’s family. The Marmara Park Ave hotel, which had beautiful artistic touches throughout, was a lovely symbol of the beautiful craftsmanship evident in Gürsel’s wines. 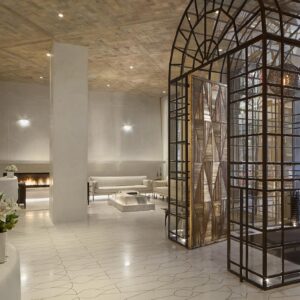 The Marmara Park Ave calls itself a New York City hotel with distinct Manhattan feel, created by such thoughtful details as using reclaimed wood from New York City for the ceiling in the lobby. A famous New York artist and all-around Renaissance man, Joe Ginsberg, was at the helm of designing the hotel. But the hotel still pays homage to its Turkish roots with a traditional Hammam (Turkish bath) for guests. 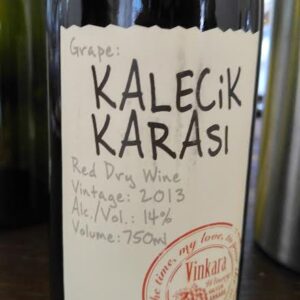 Vinkara’s philosophy is to introduce and build awareness of Turkish indigenous grapes. Gürsel said that when it came time to choose an oenologist to help them to produce high quality wines, she was most concerned with someone who had just as much passion about working with local grape varieties as she did. And in the end she ended up choosing an Italian consultant, Marco Monchiero. Since he was already very passionate about saving unknown Italian local varieties, he understood the importance of what Vinkara was trying to achieve.

I did not know what to expect since I had never had Turkish local grape varieties prior to this tasting. Happily, the wines were alluring with delicious flavors that were at once familiar yet unique. It was a great lesson that some unknown local varieties just need a little guidance from someone who comes from a long established wine making country, such as Italy, who can help these local gems reach their full potential without altering their unique character. Again, another point of kinship between Turkey, specifically Vinkara wines, and New York City is that both are open to other cultures helping them to excel.

2013 Vinkara Kalecik Karasi red wine, Kalecik-Ankara, Turkey ($14):  100% Kalecik Karasi. Dried herbs, red cherry with a hint of lavender. There is no oak used in the production of this wine and so the wine expressed the purity of the fruit.

2012 Vinkara Reserve Kalecik Karasi red wine, Kalecik-Ankara, Turkey ($28):  100% Kalecik Karasi. This wine is the reserve version of the ‘Everyday Drinking Wine’ noted above. There is a stricter selection of the grapes for this wine as well as aging in French oak barrels. The reserve has more body and concentration with richer dark cherry flavors and lots of spice. It had a long, flavorful finish.

2013 Vinkara Reserve Narince white wine, Kalecik-Ankara, Turkey ($25): 100% Narince. This is not a mistake for the fantasy wine which is typically over $50. But sometimes a fantasy wine is undervalued, and in this case, this wine is priced way below the quality of the wine. This wine was simply magnificent and unique. It was luscious in texture while staying fresh, with enticing flavors of honey, orange blossoms and a distinct minerality. It was rich yet elegant, exotic yet classic. If you find this wine I would suggest buying it. I don’t know how much longer it will be such a steal.

I vini turchi sono a casa a New York City