Lucio Dalla. Anche se il tempo passa (Even if time passes), was first hosted in the Civic Archeological Museum of Bologna, Dalla’s hometown, from March 1, the tenth anniversary of Dalla’s death, to July 17th.  Today almost the same exhibition opens in Rome at the Ara Pacis complex and can be viewed until January 6.  After Rome it will travel to MANN (The National Museum of Archeology in Naples) for the spring, to Pesaro for the summer and to Milan for the autumn, all three to commemorate Dalla’s 80th birthday, which would have been March 4, 2023.  Each venue has a section dedicated to Dalla’s relationship to that particular city. In 2024 the exhibition may travel abroad, but no destinations or their dates have been finalized.

At the vernissage for the press yesterday two world famous artists and close friends of Dalla’s, Renzo Arbore and Carlo Verdone, recounted a memory each about Dalla.  Arbore talked about summers they shared in Manfredonia, in Puglia where Arbore grew up, and where Dalla’s widowed mother had a dressmaking shop during the summers after Dalla’s father died of cancer in 1950. According to Dalla she designed the outfits, but didn’t know how to sew even a button.  Arbore said that being six years older than Dalla it was his responsibility to entertain Dalla during his mother’s fittings.

Instead Verdone described his unnecessary fear and trepidation when he, not yet well-known, went to Dalla’s home in Rome’s Trastevere to ask Dalla, who was already famous, to write the soundtrack for his upcoming film Borotalco (Talcum Powder) (1982). He went on to describe Dalla’s threat to sue him just before opening night because on the movie’s poster Dalla’s name was “inappropriately in case of a flop” in larger typeface than Verdone’s.  Dalla’s anger subsided when the movie became a huge success.

Lucio Dalla. Anche se il tempo passa is divided into several sections: Family, Childhood, Manfredonia, Musical Beginning, Friends, Clarinet, Lucio Dalla’s Museum, Dalla in Rome, Film Roles, Theatre, Dalla’s Universe, Dalla and his lyricist Roberto Roversi, TV, and Music.  For it must not be forgotten that, although Dalla is certainly best remembered for his musical compositions, his musical performances, and his love of many musical genres–jazz, blues, soul, folk music, Neapolitan songs, pop, and opera–he acted in 17 feature films, and was musical director of 17 more.  He also appeared frequently on stage and on TV.

In the sections about his childhood are family photos, his favorite toys (a rubber statue of Topolino and two large model cars he always loved) photos showing his happiness in Manfredonia, and a large ledger with one of his scuola media (1956) report cards where all his grades, except in religion which he barely passed, are unsatisfactory, the worst being 1 out of ten in math, history, and geography.

As for his passion for the clarinet, which became a lifelong bond with Renzo Arbore, the wall panel tells us: “There are at least three versions of how the clarinet came into his life.  By some accounts, it was Lucio’s mother, Iole, who decided to support her son’s musical aspirations and gave him the instrument as a gift, along with permission to drop out of school. According to other accounts, the most plausible source of the gift was Francesco Morcaldi, the former mayor of San Giovanni Rotondo, who was moved to benevolence by the circumstances of Lucio and his family. The most accredited version of the story, however, is that Walter Fantuzzi, husband of one of Iole’s work colleagues, turned up one morning on the doorstep of the Dalla household bearing a mysterious object.”

It seems that morning was Lucio’s 10th birthday and that Iole wanted Lucio to take lessons, which he quit after a short time to teach himself by ear, becoming so good that he joined a local jazz band called Rheno Dixieland Band together with future film director Pupi Avati.  However, feeling overwhelmed by Dalla’s talent, Pupi resigned, although the two remained lifelong friends.

The next section, Lucio Dalla’s Museum, is the most varied and the most intimate.  On display here, to name some of the items, are a few (he had a huge collection) paintings by Lucio’s friends, some of them his portrait and some later used a record covers; his first Remington typewriter; a life-size wooden statue of Pinocchio; leather suitcases; an electric train set he installed in his Bolognese home, today a museum: a carousel music box; one of his many Christmas crèches; and a selection of his numerous eyeglasses and hats: fedoras of many colors and materials, knitted beanies, a safety helmet, and military caps, all of which he determinedly wore to hide his ever-increasing baldness; his favorite fur jackets, one a gift from Carla Fendi, and other clothes, especially his Armani suits and stage costumes;  and his platinum records.  For Dalla is best remembered as the composer of Caruso (1986), whose lyrics recount the opera-singer’s last days.  Considered one of the most famous songs ever written in Italian immediately selling nearly 10 million records, it has subsequently been sung by many world famous international artists including Pavarotti, Julio Iglesias, Andrea Bocelli, Josh Groban Céline Dion and Michael Bolton, to name just some Dalla admirers.

After “Lucio Dalla’s Museum” comes “Dalla and Rome” where he first lived at age 17. “As he did not have the wherewithal or the economic independence to live away from home,” a wall panel tells us, “his mother advised him to get in contact with a woman she knew who ran a boarding house in Ostia near the capital”, but he was not happy there and returned to Bologna.  Luckily for Dalla, while he’d been in Rome, he’d been spotted by the famous composer Ennio Morricone, who invited Dalla to share a house with him and other musicians in the Mentana district not far from the RCA studios.  There he met the songwriter Gino Paoli, who greatly admired Dalla’s voice and his spontaneity, and success and new friendships and collaborations, especially with Francesco de Gregori, followed. In 1980 bought himself a two-storied apartment at Vicolo del Buco 7 in Trastevere, and one summer evening riding around the Eternal city on his Ducati motorbike he wrote his masterpiece ”La Sera dei Miracoli”, which celebrates Rome’s rebirth after years of political terrorism. Although in 1986, he moved back to Bologna permanently, Dalla said of Rome, where he’d also made friends with Fellini and Vendetti, “Rome is one of the most beautiful cities in the world, to me the most beautiful one; it’s a gigantic work of art. Moreover, it has the unique ability to ride its positive and negative energies.  This is the reason why I love it.” 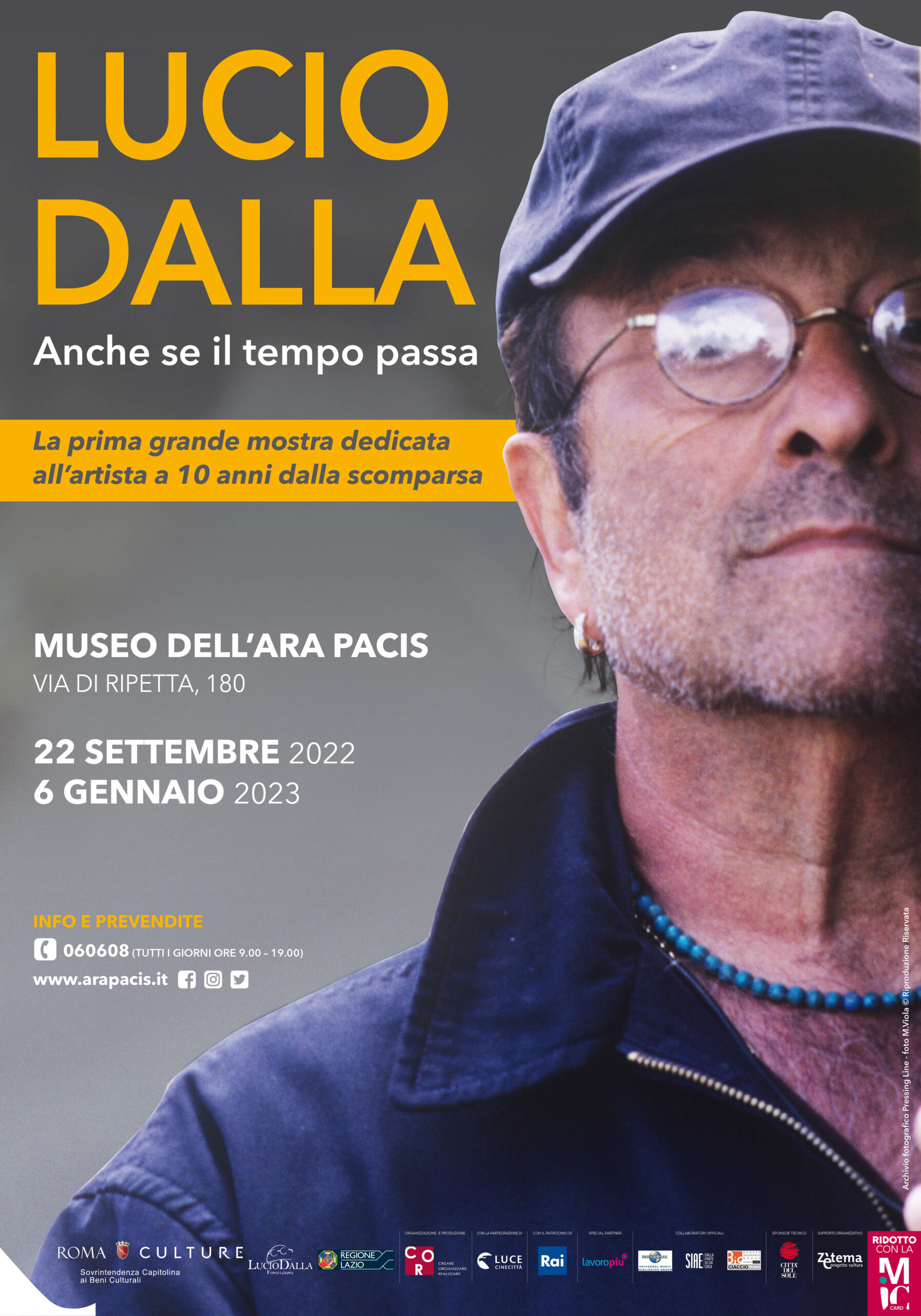 The next two sections with their many posters and videos, concern his many diverse roles in the movies, which he once said he loved more than music, and in the theater, where “Dalla pursued his interest in the idea of artistic cross-contamination. If anything can be defied as Lucio Dalla’s ‘artistic legacy’”, a wall panel tells us, “it must surely lie in his unending creative freedom. His legacy necessarily escapes neat definition, but is no less evident or valuable for that.”

Called “Dalla’s Universe”, the exhibition ends with a wall of photographs of Dalla in the company of VIPS from the world of politics, culture, art, and religion: Pope John Paul II, the Dalai Lama, Italy’s presidents Napolitano and Ciampi, Sophia Loren, and fellow musicians Renato Zero, Riccardo Cocciante, Ligabue, Gianni Morandi, Francesco de Gregorio, Jovanotti, and Ornella Vanoni.  Also on display here are Dalla’s first microphone, his first saxophone, and the pianola he played at the Montreux Music Festival the night before he died.

“Sextortion”: The Rapidly Rising Threat on the Internet Facing Your Teenager