“Kimberly Akimbo”, a Feel-Good Musical About a Teen that Ages Well

You don’t have to look hard to find a musical that involves a group of cheery high school kids (usually band geeks and theater nerds) who join forces to support some cause, like suicide awareness (Dear Evan Hansen) or alienated adolescents (Be More Chill). It’s a far cry from the teen dramas of the past, in which high school kids were essentially evil and did what they could to sabotage their classmates (Heathers, Mean Girls). It must be nice to attend high schools absent of bullies and large-scale disappointment. 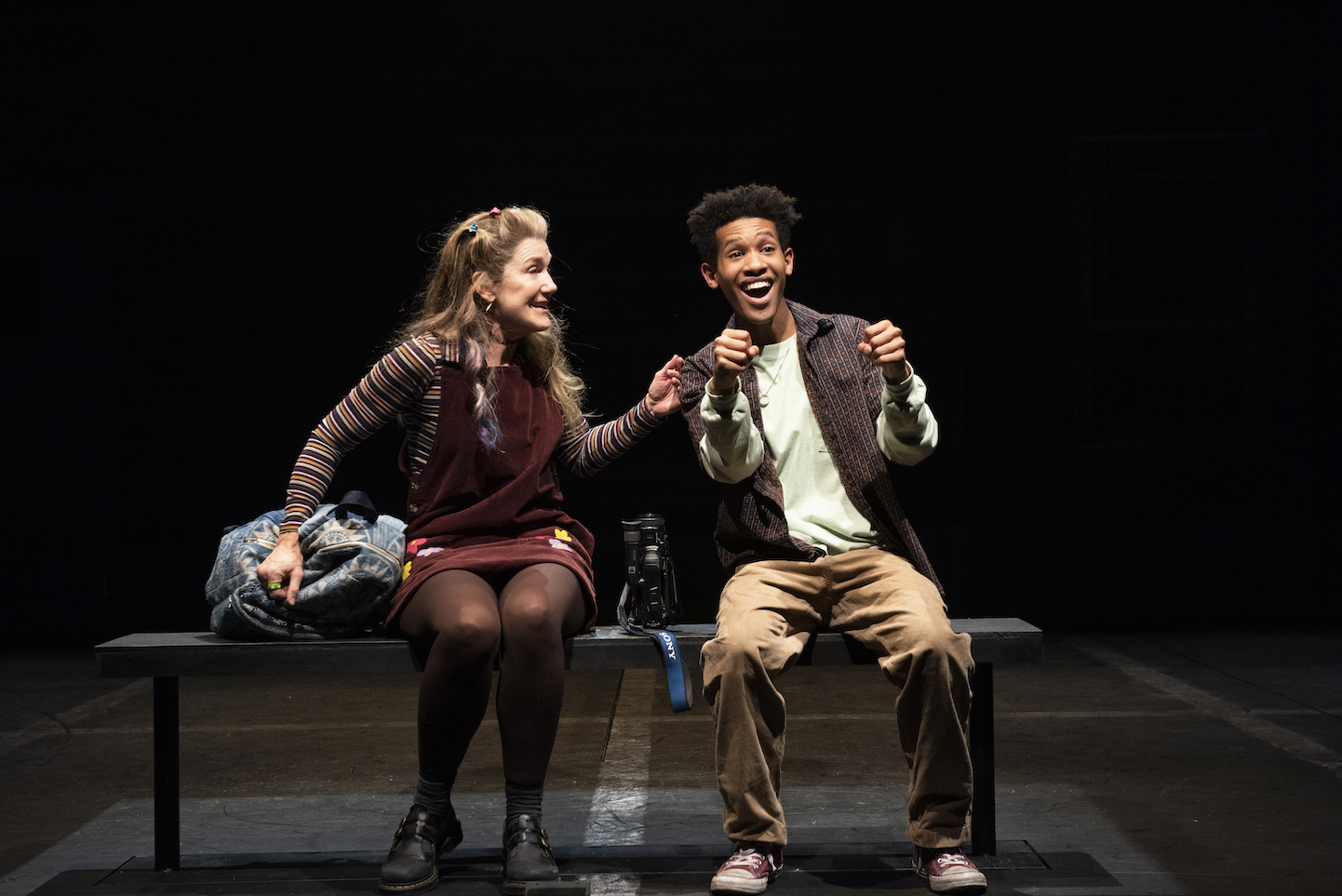 But, another one of these feel-good-despite-the-bad high school musicals has just emerged, and it’s a gem. Kimberly Akimbo (now playing at Atlantic Theater Company’s Linda Gross Theater through January 15, 2022) takes on a teen’s very unusual malady and turns it into one of the feel good stories of the decade.

Led in the title role by the magnificent, award-winning Victoria Clark (a woman of a certain age, but definitely not a teen) and her gorgeous, sonorous soprano, Kimberly Akimbo is the story of a sixteen-year-old girl who has a genetic disorder which causes her to age at a rate of four times a normal person. So, by the age of four, she looked sixteen; and by the age of sixteen, when we join her in this story, she’s liable to die of old age. Is this a real thing? It is. Tackling the subject in a biology class presentation, Kimberly and her friend give us some of the details of progeria, and while she’s trying to be lighthearted about it, the facts are too heartbreaking and she’s not able to face the class or this unfair reality. 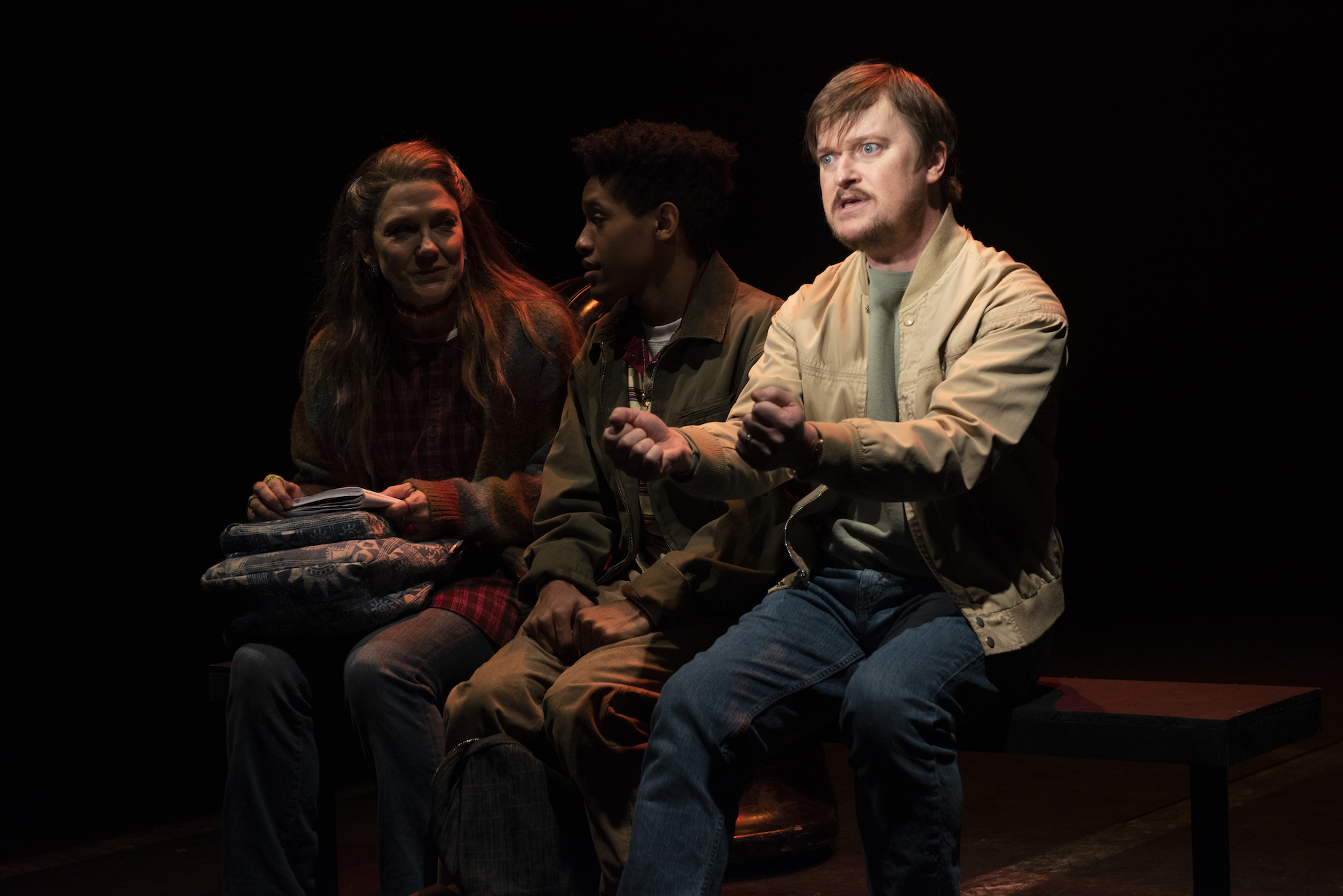 While Kimberly is mentally and emotionally still a teen, her immature and irresponsible parents force her to behave like an adult as well, becoming the voice of reason in her own household. Her father (Buddy, brilliantly played by the comically perfect Steven Boyer), a difficult-to-like drunk, shows up late to pick her up from school events; and her mother lazily records video messages to her unborn child, while nursing bandaged wrists as she recovers from carpal tunnel surgery. The household is an emotional mess and we haven’t even met her ex-con, deadbeat Aunt Debra (an absolutely hysterical Bonnie Milligan) yet.

But there’s refuge at school for the very shy Kimberly who, despite appearing as if she’s in her 70s, attracts the attention of the anagram-happy word-nerd, Seth (the handsome and charming, silky-voiced newcomer Justin Cooley. (Pay attention to this kid, he’s going to be a big star someday soon). Outwardly, they look like Harold and Maude, but really, they’re two teens falling in love, and it’s as sweet and believable a romance as you’ll ever see on stage. 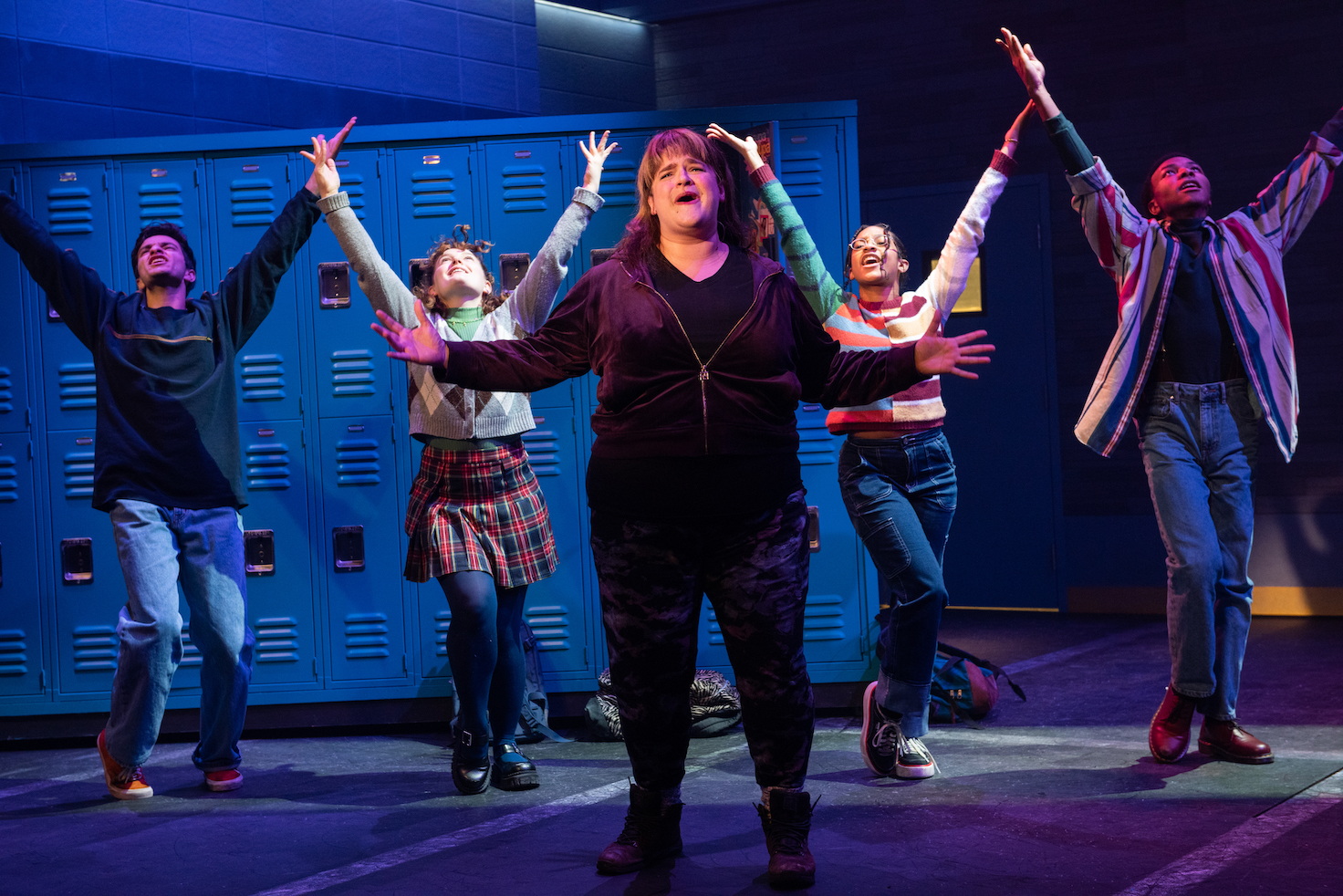 Rounding out the cast are Kimberly’s four classmates, an enthusiastic group attempting to raise enough money for Dreamgirls costumes for their Show Choir. They are also unknowingly wrapped up in a love quadrangle, which Debra brutally illuminates with a couple of snarky comments. Debra recruits the young performers, as well as Seth and Kimberly, to be her “crew” for an elaborate and very serious white-collar crime, which they accept blithely. After all, they all need a large cash infusion in order to pursue their dreams. Somehow, the seriousness of their conspiracy never seems to occur to any of them, and that’s part of the charm of the musical—none of the dire circumstances ever pull us underwater and they ultimately fall out of focus in favor of the developing love affair. Teen romance is like that.

Kimberly Akimbo’s appeal comes from the teaming of Jeanine Tesori’s (Fun Home) music and David Lindsay-Abaire’s book and lyrics. Director Jessica Stone pulls together the terrific songs with Danny Mefford’s delightful choreography and the strength of Clark and Cooley’s utterly charismatic and heartfelt performances and infectious smiles, leaving the audience with full hearts despite being witness to a woeful and tragic tale of a young woman with a stunningly unfair and awful disease. It’s a terrific musical that shouldn’t be missed. There are rumors that it may be transferring to Broadway, but this is a year in which nothing is certain. So see it before it closes in mid-January or the opportunity may not arise again.

Based in New York, JK Clarke is a writer, photographer and associate editor for theater review site, Theater Pizzazz and is a Drama Desk member and voter. He specializes in Shakespeare studies and productions.

75th Annual Tony Awards: A Glimpse into the Current Mood of New York and the US

What To See and What to Skip in New York Theater: The Play

“The Skin of Our Teeth”: Out of the Ordinary, but Not for Everyone