The most peaceful and least touristy, this Roman neighborhood is jam-packed with a spectacular church, garden, art and history

The Grand Priory of the Knights of Malta. Photo: Wikimedia Commons

Off-the-tourists’-beaten-track, the Aventine Hill is one of Rome’s most peaceful and least commercial residential neighborhoods, but with several sites worth a visit. Last year 15 members of the Foreign Press were invited to visit the most special one: the Knights of Malta’s Grand Priory.

The occasion was to celebrate Piranesi’s 300th birthday and visit his only architectural work, the neoclassical Church of St. Mary of the Priory. Because of Covid our visit was postponed until June 23, 2021, appropriately the feast day of St. John the Baptist, the Knights’ Patron saint.

The Priory is at the Aventine Hill’s summit, on the ornately walled Square of the Knights of Malta (Piazza dei Cavalieri di Malta). In 1765 the Prior, Venetian Cardinal Giovanni Battista Rezzonico, the nephew of Pope Clement XIII (r. 1758-1769), commissioned his fellow Venetian, Giovanni Battista Piranesi (1720-1778) to spruce up the area.

An architect, archeologist and engraver, Piranesi began by designing this picturesque square, decorating it with alternating obelisks and stelae. The stelae’s decorations feature shields and swords from the Rezzonico family’s coat-of-arms, and lyres, cameos, cornucopias, serpents, bird wings, and Pan pipes, all Piranesi’s favorite archeological symbols.

On one side of the Square is Rome’s international Benedictine seminary and the Church of Sant’Anselmo, where the monks sing Mass in Gregorian Chant on Sundays starting at 9:30 AM.

Across is a massive mysterious wooden door set in a monumental entrance, also designed by Piranesi. Its large bronze keyhole is one of Rome’s intriguing and very popular tourist sights. Looking through it, you’ll see in the distance a unique miniature view of St. Peter’s dome framed by a cypress-lined avenue.

Behind the door, usually shut, in a magnificent manicured garden of clipped hedges and rose bushes, is the Knights’ Priory with a distinctive tower. The site, which overlooks the Tiber, was already a fortified Benedictine monastery in the 10th century.

Later it belonged to the Templars, descendants of the Crusaders, but after Pope Clement V disbanded their Order in 1312, its ownership passed to the Knights Hospitallers, the predecessors of the Sovereign Military Order of Malta (SMOM), its owners since the 14th century.

The Knights of Malta is the oldest surviving order of crusader knights. Granted extraterritorial rights by Italy in 1869, the order is a sovereign entity and the Grand Priory is the embassy of the Sovereign Order of Malta to Italy.

The Order’s motto is Tuitio fidei et obseququium pauperum (‘defense of the faith and assistance to the poor’). Venerating the Virgin Mary as its patroness and St. John the Baptist as its patron, the Order’s role has always been to provide humanitarian assistance internationally. This is the reason it has had observer status at the United Nations General Assembly since 1994.

Founded in Jerusalem in 1113 by merchants from Amalfi to care for pilgrims of any religious faith or race, today the Order counts 13,500 Knights, Dames, and auxiliary members, all of whom must be Roman Catholic. A few dozen (c. 50) are professed religious. Membership is by invitation and some 30% are women. Led by a Prince and Grand Master elected for life (always a professed religious), the Order’s annual budget of some 1.5 billion euro is funded by European governments, the European Union, the UN, foundations, and private donations.

It employs some 40,000 doctors, nurses, auxiliaries, and paramedics, who are assisted by 80,000 volunteers in some 1,500 hospitals in more than 120 countries, mostly in Europe and Africa. It intervenes in war zones and after natural disasters, distributes more than 5 million meals a year, accompanies the sick on pilgrimages especially to Lourdes (Covid permitting), cares for children, the homeless, the handicapped, the elderly and terminally ill, refugees, the socially discriminated, ethnic minorities, and lepers around the world.

As a sovereign entity of international law the Order has no territory but maintains diplomatic relations with many countries.  It has its own national anthem (“Ave Crux Alba” or “Hail, Thou White Cross”) flag (red with an eight-pointed cross), coat-of-arms, currency called the scudo, and stamps, but only three male citizens: the Grand Master, the Lieutenant Grand Master, and the Chancellor.

In the USA with offices in New York (since 1927), San Francisco (since 1952), and Washington D.C. (since 1973), the Order counts some 3,000 members. They make home visits to the sick, and organize shelter for single mothers and women who’ve suffered domestic violence.  They also run food banks and soup kitchens and run programs for street children and convicts.

To return to Rome, besides the Priory the garden also houses the Church of St. Mary of the Priory, the main reason for our visit.  In the same year he designed the square outside, Rezzonico commissioned Piranesi to restore this small church.

The first church, which gets its name from an icon of the Madonna found on the site, dates to 969 AD. Over the centuries the church had undergone very few renovations before Piranesi’s.  Like his outer walls and entrance way, Piranesi’s renovations included representations of the glories of the Order as well as those of the Rezzonico family. Flanked by two sphinxes, his façade of glistening white marble with fluted pilasters evokes an ancient Greek temple façade. 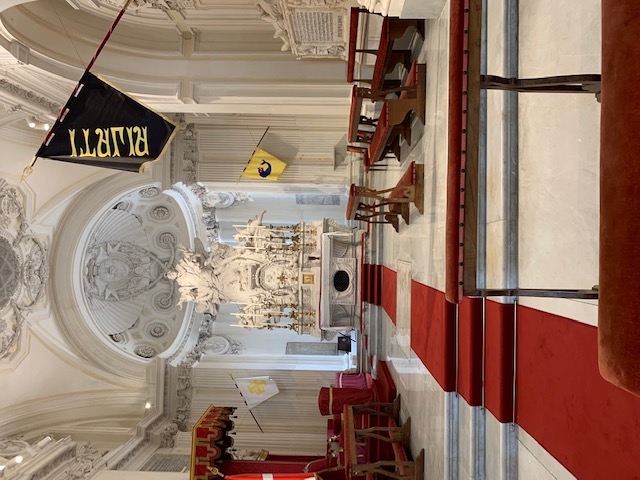 Piranesi’s interior, a single nave with four pairs of niches, is also totally white.  Again his decoration for the ceiling vault is a wealth of ancient and Christian symbols.  Its bas-relief depicts St. John the Baptist with the Agnus Dei: in its center is a Greek cross supported by putti; at its top the tunic of humility worn by the Knights of Malta, the papal tiara and St. Peter’s crossed keys. The altar depicts the Apotheosis of St. Basil with Seraphim and Cherubim raising him to heaven.  In the foreground is the Virgin and in the lower part a burial niche connected to the crypt below, which contains the coffins of the 20th-century Grand Masters.

Piranesi’s tomb is in the second niche on the right of the nave.  Angelini’s statue shows Piranesi wearing a toga.  A roll under his arm bears the plan of the Temple of Poseidon in Paestum, Piranesi’s final archeological campaign because on his journey back from Paestum to Rome he died of malaria.

For Piranesi’s complete story: J. Wilton-Ely’s detailed biography (1978): The Mind and Art of Giovanni Battista Piranesi, London, Thames & Hudson, is an unbeatable source. The Knights’ patronage not withstanding, he’s best known for using his architectural skills and his knowledge of archeology to create from 1748-1774, numerous engravings of Rome’s ancient monuments and views of the Eternal City with personal imaginative variations.  In addition, his 16 prints called “Carceri d’invenzione” or “Imaginative Prisons” of enormous subterranean vaults with stairs and mighty machines (1745-61) are notable.

To visit the gardens and church, contact the Order’s Rome office at 011-39-06 675811 or info@orderofmalta.int or the guide Valérie Guillot at v.guillot@orderofmalta.int. Guided tours usually take place on Friday mornings from 9:30 AM to 12:30 PM and twice a month on Saturday mornings from September 15th to June 15th. Lasting approximately one hour, each tour should have at least 10 participants and no more than 20. The entrance fee is 5 euros per person; children under 12 don’t pay and students over age 12 pay 3 euros. The guide is compulsory.  An Italian-speaking guide costs 80 euros; instead English, German, French, and Spanish speaking guides cost 100 euros. The entrance and guide fees are paid in cash on the day of the visit.

Other Aventine sights are the two nearby 5th-century churches: Santa Sabina and Santi Bonifacio and Alessio, and the small “Orange Tree” park.  A short walk downhill leads to the municipal Rose Garden with over 1,100 species from all over the world.  Just beyond is the Circus Maximus, once Rome’s largest stadium for horse races.

Less than a block away from the keyhole are three small family-owned hotels, all with gardens: Aventino, San’Anselmo, and Villa San Pio. For a nearby memorable meal head to Apuleius.

Cartoon of the Week/34