Sunday, Dec. 13 is the debut of the courageous video-opera with a wonderful interpretation, totally worthy of the intentions of the author Francis Poulenc 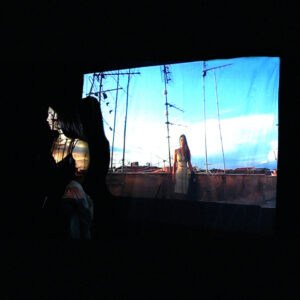 On Sunday December, 13, 2020 at 8 pm in Rome, 2 pm New York, on the American Groupmuse platform the concert film “La Voix Humaine” directed by, and starring, Natalia Pavlova, who makes her debut as a director, will be broadcast as a world premiere. The concert film was shot during the first long lockdown of the Pandemic, with the pianist Igor Stepanitch playing live from Moscow, the sound engineer Maestro Venus Rey Jr managing the sound from New Mexico and the singer and director who shot it and sang in Rome.

This is the review by Marcello Lippi who previewed it for La Voce di New York.

This ‘home-made’ production of “La voix humaine” (The Human Voice) by Francis Poulenc, is above all a cry and an affirmation: nothing can ever extinguish talent, which can be mortified by catastrophic events such as the current pandemic, to which the aforementioned production explicitly refers, by insensitive governments, wars and world economic crises, but always finds a way to re-emerge powerful and not to be suffocated. In this video, bravely made during the first lockdown of spring 2020 in the narrow space of a house, with the objects of a normal life that is no longer normal, and, as the only oneiric visual outlet, the terrace of the building, there is a lot of creativity and talent, starting from the conception of the idea, up to its very effective realization.

Poulenc’s work is the transposition into music of a famous monologue by Jean Cocteau which even then, in 1958, quickened the pulse of the famous actress. This work tests the performer to her maximum limits of acting and musical ability. The interpreter in this work must have total concentration on the character for a period of time between 40 and 50 minutes, alone on the stage, filling the silence of the moments in which the word passes to the lover who has abandoned her, and expressing a range of conflicting emotions and moods, with sudden changes of mood and voice: a true scene of madness in monologue that had Berthe Bovy as the performer par excellence on the theatrical stage.

Very different from what Cocteau had in mind, but equally magical, was the woman (she has no name, she is indicated in the work as “ She”) as recreated by Anna Magnani in Rossellini’s film. She brought her own sensitivity and mastery to the character, transforming herself into a wounded beast very far from the Parisian atmosphere.

But it was precisely with the music of Poulenc (a friend of Cocteau) that the pièce found its expressive apogee, because the voice of the protagonist also had all the infinite colors of singing (of the human voice, in fact) at its disposal. Thus, the initial intention of the creator of the Cocteau-Poulenc project (they were friends in life), Hervé Dugardin, representative of the Ricordi publishing house in France, was to entrust the work to a great interpreter who was also a great name of the scenes: Maria Callas.

The film production at present refers to this episode, which states in the titles that the work was composed for Maria Callas and is dedicated to her. In reality Poulenc did not accept Callas as an interpreter, precisely because of her great name and her stardom, and obtained his legendary first interpreter, Denise Duval who, as Poulenc wanted, far from the wounded panther interpretation of Magnani, had to be a beautiful young woman, emaciated, withered, defeated from the first note, fragile and willing to ask for forgiveness even from the lover who is betraying her. In short, a woman already predisposed towards a suicide that, at the present, is just hinted at, leaving the ending “open”.

Natalia Pavlova, who is certainly a beautiful woman, as Poulenc wanted, is a wonderful interpreter, worthy of the author’s intentions: the fixity of the gaze, the ability to manage the narration in active and passive moments, the constriction in a narrow, distressing environment, in which the protagonist does not make a single gesture out of place or out of an extreme essentiality, acting perfectly with face and eyes, the game with her “alter-egos” that come to life everywhere, on the projection screen, on the computer screen, in the mirror in a game of reflection, and who are outdoor, that means free from that horrible imprisonment of a broken and finished love, caught in the moment of breaking. All these situations are handled by a very talented actress. 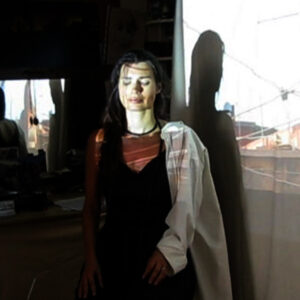 Her eyes dig into the soul of the spectator, after the first moment of adaptation to the conclusion: they are painful eyes full of superhuman intensity, they never leave the camera, intensely asking for help, help from the spectator of her drama, no one knows how real.

The director and performer, in fact, excludes the presence of the most obvious object of the narration: the telephone. “She” is never on the phone. Only the cord is visible from the start of the scene – the cord that will wind around her neck in the finale.

The narrative can therefore be realistic or dictated by a state of alteration, real or dreamed and we welcome the insert in which “She” dances on the terrace, dreaming of being free, with the wind ruffling her hair, to the notes of a French song unrelated to the opera. The framing of the film entrusted to a painter, writer and complete artist, David Colantoni, who in terms of talent is certainly not inferior to the protagonist, denotes a profound symbolic research, always readable in its essential features, never detached from the original piece. The singer’s gestures are highly sought and true, even when half of her body becomes, with a very intelligent game of costumes, part of the lover’s body, in an extreme attempt to reunite the two souls.

Vocally Natalia Pavlova is not afraid of a comparison with the great performers of the past (Olivero, Zeani, Scotto and more recently Antonacci) and never imitates them: she interprets her own character, very close to the idea of ​​a fragile and defeated woman that Poulenc wanted. A little mechanical in the first phrases, a little frivolous, which distinguishes the dialogue, the voice then becomes flexible in the legatos of the few “cantabili”, in the essentiality of the declamation, in the safety of the high notes and in the total adherence to the mood of the character. 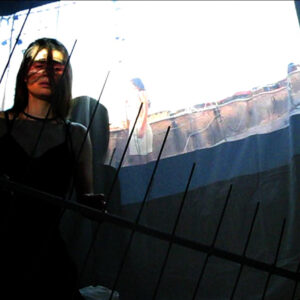 Among the presences that accompany her monologue, in addition to the various “alter-egos” mentioned above, which are often projected onto her body, almost as if they entered her, her shadow is of great importance, with which she interacts and becomes, thanks to the clever play of light, a symbol of death. Very precise musically, Natalia Pavlova does not lose concentration even for a moment, with those eyes that, in the foreground, so close to the viewer, deeply move and tear the soul.

Only great actresses can be so expressive with so much minimalism: her face says everything, even to those who do not understand the French language. The final product, the film projection, is absolutely worth experiencing, not just watched and listened to, because it does not allow any passive presence to the viewer, but emotionally involved to the point of tears.

It is an experience not to be missed and at the same time a strong signal to those that would like to shut down and silence these talents. It is difficult to say whether the Opera will be able to find a life similar to that of Christians in the catacombs at the time of persecutions, using the web resource, but it is absolutely to be praised for the courage with which this immense work was carried out in full lockdown.