Reality Fleeing from Itself: “Peeping Tom” at “BAM’s Next Wave Festival 2019”

North-American debut of the extraordinary Belgian group while their “Trilogy” about family, life and death, tours around the world.

Nowadays a dance group committed to narrate its point of view on the burning theme of the family can only be heroic and very confident in its expressive capacities to not give in to the usual rhetoric of the ‘blah, blah, blah’, teary and linguistically didactic.

Fortunately, this very talented eccentric group – which has given itself the very fitting name of Peeping Tom – has no fear. Since its beginning in 2000, thanks to the creativity of the Argentinian Gabriela Carrizo and the French Franck Chartier, the group has collected successes, it counts numerous co-productions and an abundance of prizes, thanks to the indefinable signature style of their performances.

The Peeping Tom group blends dance, acrobatics, acting and singing, and nails all these disciplines in a hyper-realistic aesthetic, stuck into real stage sets, but unsettled or distorted by a perceptive and human instability, which contradicts every rational logic of time and space.

We would now like to look further into the intricacies of the family Trilogy which has taken years of work: Kind (Son,2019), Moeder (Mother, 2016) and Vader (Father,2014) gathered in this order and presented for the first time at the long and relevant Italian festival “TorinoDanza 2019”.

Nevertheless, we must announce the upcoming North-American debut of the group with 32, Rue Vandenbranden, at the Harvey Theater in Brooklyn (November 20-23) within the “BAM’s Next Wave Festival 2019”.

This award-winning performance has toured all over the world for ten years and, not without sadness, it will mark its last show right in New York. Farewell to its snow, to its rain, its wind gust at the top of an isolated mountain frustrated by the bad weather, where happy skiers come by from time to time, while seven tormented characters come and go from two shacks, one in front of the other.

A young pregnant woman, languid and grim, is in search of a father for her future son. A couple solves its problems in physical attraction, one of them is the suspect: the male partner is also the father of the born-to-be. Two brothers, one shy and childish, the other outgoing and narcissistic, live together with a burly and singing mother-nature performer, and also mezzo-soprano Eurudike De Beul, the group’s constant performer – here devoted to lead her frail son into the arms of the pregnant woman. As a result of these intricate ties the small community has fallen into desperate solitude and also because of the earthquakes which often affect their extremely fragile houses. In the end, we are already tasting what the family Trilogy has to disclose.

We are enchanted by the skills of the interpreters through the invention of a dance that draws into almost dangerous ensembles and in acrobatic solos. The bodies seem made of clay for the extent that they can bend, intertwine and cling to one another. The music –usually classic or pop pieces, combined with warbles and sound explosions without signature- – wraps them with some brief text here and there. An almost perfect “film” editing with a perfect timing, which contrasts their ongoing surprises.

In the mountaineer 32, Rue Vandenbranden, where maybe the last of the Mohicans still lives, the freezing community is on its way to annihilation. Each character fails to recognize the edge between what has happened in reality and what they believe has happened. A last group dance with amazing female surges, tells us that the terrible or fairy-like snow only appears to be a driving force for this hyper-realism, always in flight from itself and in balance between untold mysteries and bland certainties, as in some theater of the Swiss director Christhof  Marthaler.

The habitat  is very important in the Trilogy. In Vader (Father) we are in a nursing home, in Moeder (Mother) in a museum and in Kind (Son) somewhere in the woods. Vader’s nursing home mainly inhabited by the elderly, (seven protagonists, become 18 with active walk-ons) is almost underground: light filters from an only window and seems to be already between life and death. The father is the extraordinary eighty-year old Leo De Beul– at times in a wheel chair, at others concentrated in dances—played along by a little orchestra that offers popular songs. His son – a middle aged giant – comes in and out only for brief visits and is also a father to a young man who scolds him for not having joined in anything with him and the family. 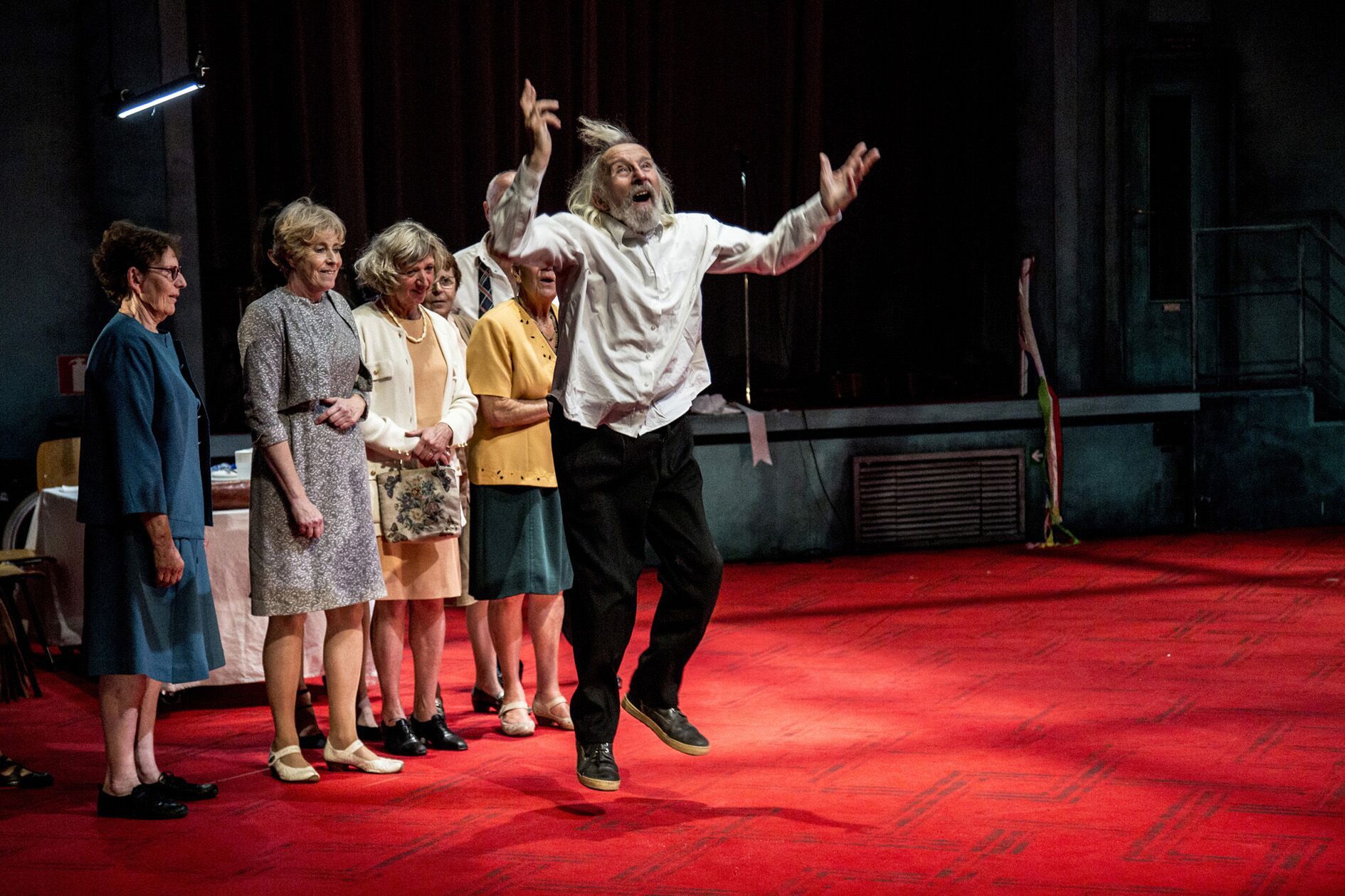 Three generations that confront themselves, a terrible cocktail of emotional indifference broken by the old father: well taken care of by caregivers/dancers who he believes are his secret children, between moments of lucidity and hallucinations, also hilarious. He is a sort of oblivious God without any power over his creatures and on his way to abandoning us as he has completely left us, for good and bad, the figure of the pater familias of the XIX century.

In Moeder we are also in an interior: the museum is strange and aseptic. Does it contain a funeral parlor or a delivery room? A mature father and museum guard reports the sadness of the day: there is a moaning woman (mother?) on a coffin in a delivery room. The grief of a daughter liquefies itself in a sort of shuffled dance on the ground, on water created by sound effects, but also by the abundance of tears of a motionless cleaning lady. A young woman rocks her baby: joy explodes.

In the delivery room everybody is transformed into rock stars and sings. Unfortunately, the dynamic dizziness wrapped in cellophane in which the mother gets excited is such that her child is stolen by a cruel Asian nurse, still in pain and during the entire show, always pregnant. The stolen baby girl’s parents are allowed to visit her only on her birthdays.

Trapped as she is in an incubator, the little one becomes bigger and bigger on every birthday, so much so that she becomes an overflowing mass of flesh. Blood chilling. More so when we discover that among the paintings of the museum, the drawing of a beating heart bleeding, and in a drawer in the wall the obese daughter of the incubator: dead. 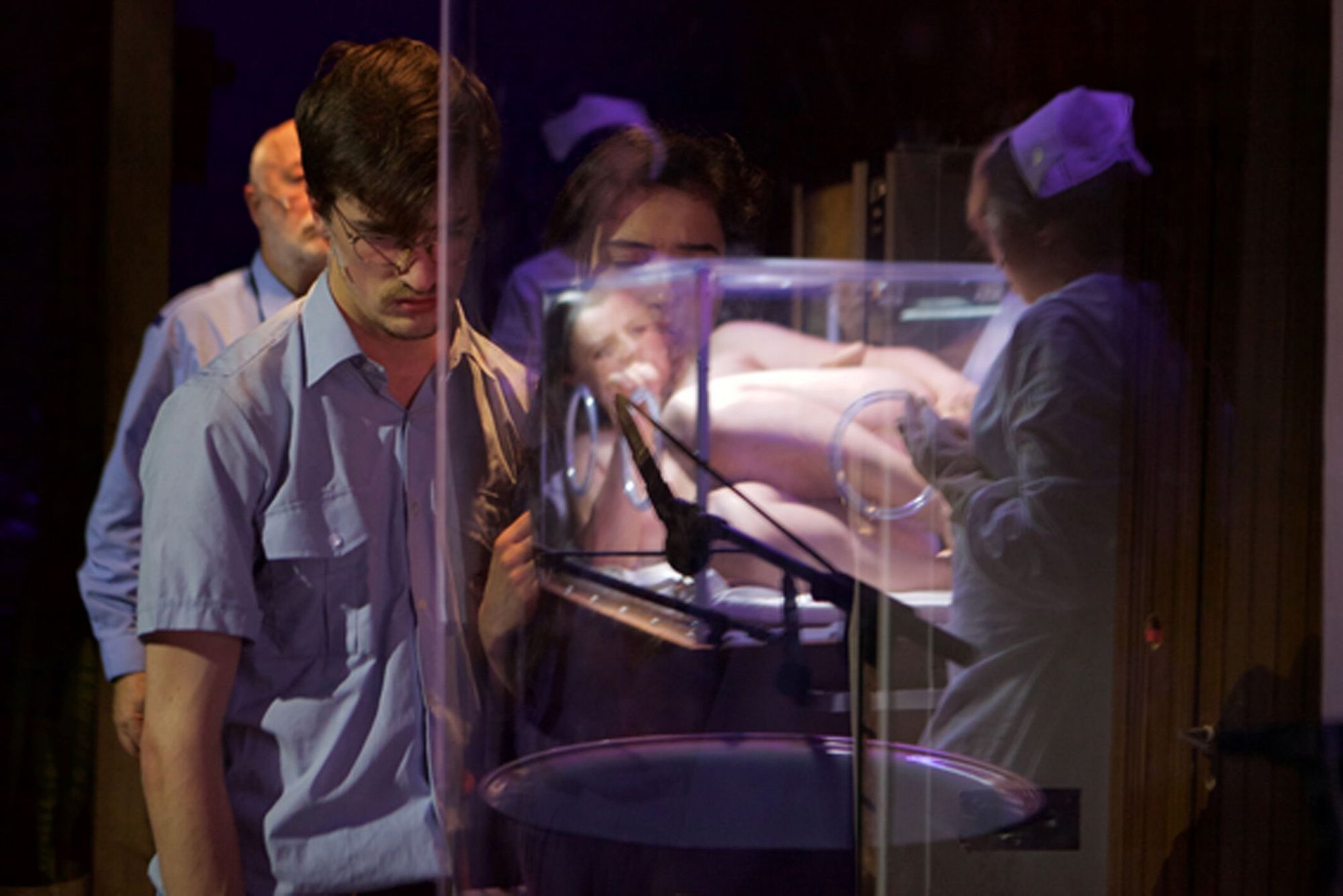 Her mother chases (in a dream?) a “normal” girl; the father-guard declares he is an orphan and twice a widower. Itchy and brutal irony, enhanced in the end when the delivery room acquires the colors of a blossoming garden. A dancer’s cheek had come near a landscape of nature: the mother, central figure for the cognitive-emotional development of children, today too often elusive and unattainable. A nostalgic flower scent?

In Kind we find ourselves outside in the open air: the ravine in the woods is also rocky, bordered by a tall and flat white wall always about to crumble. The landscape is dark, with a romantic and fairy-like flavor. It shows us a large moon, at the end of the backdrop. Maybe because only a child’s fantasy can conceive a world that offers dreams and emotional security. Here, though, nothing is reassuring. We find the same marvelous performer of the incubator in Moeder: she scurries here and there like a normal girl on a bicycle that hardly holds her body. She becomes sweeter when she sees a deer with human legs in high heels come out of the woods. But then she is ready to hold the gun against a family of tourists in a tent hidden in the foliage, as does her violent father, a forest ranger.

Fatherhood resolves itself in a never-ending scolding and beating of the daughter, in the teaching to kill and the total indifference to requests for affection. Completely eluded also by the supposed mother, a sort of nymphomaniac, who forces the forest ranger to a marathon of acrobatic kisses of great sensuality and dancing fluidity. All at once the female “Kind” transports us to Richard Wagner’s Liebestod with a strong and clear voice. A disorienting poetic detail, launched towards an otherwise unexpected elsewhere of love and death.

In the apocalyptic ending, in a hail of stones and trees, there appear naked figures almost made of foam with backward faces or white-dressed aliens that embrace themselves. Future lineage in the daughter’s fantasy? If so, a light of hope is shed, but once more of mystery in the shaky cosmogony of the Peeping Tom capable of throwing us headlong in the chasm of our troubled family and human relations, and fly away with spicy dance peaks. Magical.