On November 1-2, it will be celebrating Italian books, art, ideas and culture.

I AM Books, an independent, dynamic and diminutive bookstore with an Italian focus in Boston’s North End neighborhood,  is hosting the second edition of IDEA Boston, a two-day festival celebrating Italian books, art, ideas and culture that will take place at the Dante Alighieri Cultural Center (41 Hampshire St., Cambridge, MA 02139) Friday. Nov. 1 and Saturday, Nov. 2. 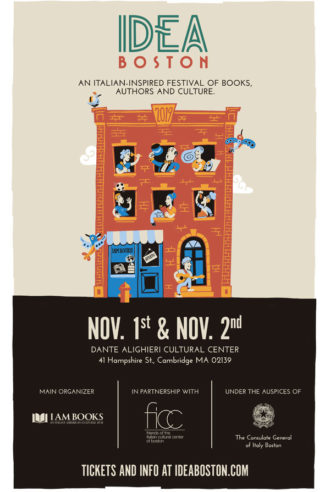 After a successful debut last year, the IDEA Boston festival is returning packed with an expanded lineup of more than 25 panels, 60 guest speakers– from academia to award-winning authors, poets, artists, social and political analysts, actors, musicians– a photo exhibit (open to the public), and a gala to wrap up the two days of intellectual stimulation and live entertainment.  While focusing on all things Italian, all sessions are held in English for greater accessibility.

“We might be a young festival, but we’re growing rapidly,” said IDEA Boston director Nicola Orichuia, who is also co-owner of I AM Books, the organizer behind the festival. A native of Rome,  Orichuia arrived and settled in Boston in 2008; his indie bookstore maintains a particular focus on Italian and Italian-American literature and culture.

Indeed, I AM Books dubs itself a “cultural hub” year round with Italian lessons for children, storytelling, readings, presentations, book signings and “I Piccoli Lettori”, an Italian reading group for children up to four years of age. Besides books, games and magazines, I AM Books features audio books in Italian and carries an impressive collection of bilingual books for adults and children.

Thanks to a partnership this year with Friends of the Italian Cultural Center-Boston (FICC-B), I AM Books has increased the number of presentations, with guest speakers representing more than 20 colleges and universities across the nation and an onsite pop-up bookstore.

“We are very excited about our partnership with Orichuia’s I AM Books and in bringing a wide range of high quality presentations to this year’s IDEA Boston,” said Anthony Pangaro, Chairman of the FICC-B. Founded in 2012, FICC-B’s goal was developed to specifically strengthen cultural ties between New England and Italy.

“We do events all the time at the bookstore. This just feels a bit more special, because we have so many of them concentrated in two days,” said Orichuia.

One of the keynote speakers will be Italian author Edoardo Albinati, the 2016 winner of Italy’s most prestigious literary award, the Premio Strega, for his non-fiction book, The Catholic School (Farrar, Strauss and Giroux, 2019).

Albinati will be in conversation with Anna Lawton a member of the jury for the Premio Strega and Antony Shugaar, who has translated Albinati, four other Premio Strega winners, and noted authors Roberto Saviano, Maurizio De Giovanni, and Primo Levi, among others.

Talks will range from “Caravaggio Superstar” to “The Influence of Italian American Players in Baseball”; “Enrico Fermi: The Last Man Who Knew Everything”; “Italian American Women, Food and Identity: Stories Around the Table”; to “Learning and Teaching Italian Through Film to Mamma Mia: Mothers and Mothering in Contemporary Italian American Writing”; “In the Company of Louise DeSalvo” identifies the many ways in which DeSalvo worked to create literature as community. “Writing Outside the Walls of the Italian American Poetry Community” melds the personal with the political as women writers address how their work interacts with the state of the nation at a session that includes a poetry reading.

One panel will hone in on the aspects of religious festivals in Boston’s North End neighborhood. Augusto Ferraiuolo will discuss the interplay of ethnicity and religion in the festivals, compared with festivals in Italy, while Michele Segretario’s talk about music at the Fisherman’s Feast will examine how sounds reflect and express identity and place. 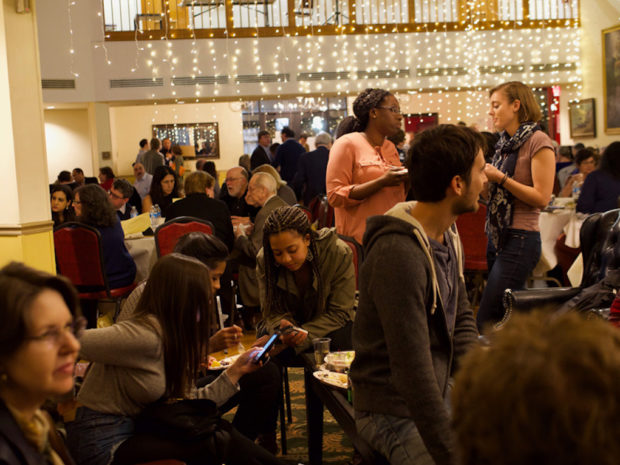 Theater and drama are among the most important gifts Italian immigrants brought to the U.S. so it is no surprise that a three-way discussion will explore the opportunities and challenges Italian theater meets when it comes to the United States or travels around the world.

Discussants include Laura Caparotti, Founding Artistic Director of the main Italian Theater Company in NY Kairos Italy Theater, and of In Scena! Italian Theater Festival NY; Silvio Alessandro Di Gioia who is Co-President of the Boston Children’s Hospital Postdoctoral Association, performs with the professional comedy company Pazzi Lazzi, and directs an Italian improvisational theater company, ImproNati; and Chiara Durazzini a native of Florence, Italy who is the co-founder and artistic director of the Commedia dell’Arte troupe Pazzi Lazzi for which she performs, teaches and directs.

In addition to literary-themed panels, IDEA Boston will also feature talks on current affairs, politics, art, immigration, and identity. Wrapping up the Friday portion of the festival will be a theatrical representation in Italian of Nobel Prize winner Luigi Pirandello’s La giara (The Oil Jar, 1916). This will be staged in Italian with English subtitles. Based on a short story he wrote in 1906, La giara was originally written in the Sicilian vernacular. By 1925, he had translated it into standard Italian when it was performed in Rome, which is the version IDEA Boston will be presenting. Among Pirandello’s theater plays, La giara is the one that is most indebted to the great tradition of Sicilian theater and literature.

An art exhibit featuring 23 of the photos featured in From Italy to the North End (SUNY Press, 2017) will be open to the public throughout the festival. 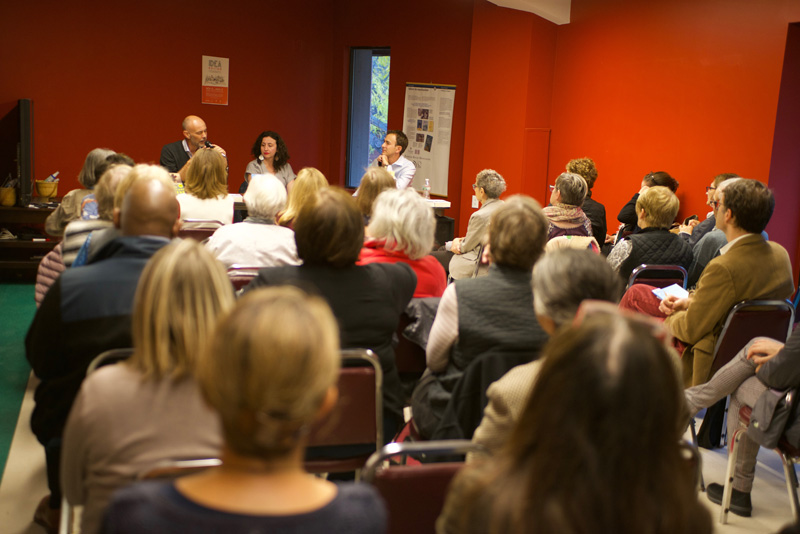 The event will conclude with a gala featuring Sicilian-inspired food by Brelundi and live music by the Newtalians.

Among those activities at I AM Books is the monthly literary reading Italian American Writers Association (IAWA) Boston hosted by Julia Lisella and Jennifer Martelli that began in October, 2017:  the original series that continues in its 28th year is based in NYC at the NYPL Mulberry St. Library. It is among the longest running literary series in New York City.

Registration is required to attend events and panels; day tickets range from $25 to $35 for full days; individual tickets can also be purchased online. https://ideaboston.com/buy-tickets/

IDEA Boston is organized by I AM Books, visit iambooksboston.com.