The Enigma of de Chirico, the Perfect Portal to Italy

I love the feeling of walking Italian streets: the vias, viales, vicolos, piazzettas tend to redirect my sense of urban space inwardly so that I feed readily off the energy of the narrower proximities of street and shopfront, fountains and people. Because Jennifer and I haven’t slept in twenty-eight hours, an espresso seems in order.

There is no espresso anywhere on earth like that you find in an Italian bar.  The portion, texture, and aroma of that little cup of coffee are imitated with varying degrees of competence all around the world, but no other has ever produced anything to rival un caffé from even the humblest Italian holes-in-the wall, where you can easily pay for your drink in change.  We turn down via Garibaldi and decide that coffee demands a gelato. We stop at the first place we come upon.  The proprietor is happy to offer us free tastes of her house-made flavors, one of which is a lovely and subtle rosewater, which we both pair with other flavors.

Last winter, Genoa wasn’t even on our radar.  My wife and I were planning a long-overdue visit to see dear friends in Tuscany, to be followed by a trip to Naples and the Amalfi Coast.  Our initial plan was to fly in wherever we could, go immediately south by train to Tuscany, and, after a week of various destinations there, head down to the Amalfi Coast and back around the gulf to Naples.   As it turned out, the best airfare we could find was for a flight from Chicago to Amsterdam; then Amsterdam to Genoa, not Milan.  Previously, Genoa had for me been a station in which to change trains between Milan and Tuscany.

Wanting to acclimate to the time change before meeting our friends in Forte dei Marmi, Jennifer suggested that we spend the night in Genoa.  A little rest before boarding a crowded train to head south the next morning sounded like a good idea.

On our connecting flight, we lolled in and out of semi-sleep until light turbulence alerted us to the fact that we were crossing the Alps, which we could see in silver and purple relief below.  I’ve always found those five or ten minutes above the Alpine massifs to be a great reward for flying Europe north to south.  Soon we were descending into Genoa with the sunlight of the city reflected on our faces.

Our driver was an affable local who seemed thrilled that I spoke enough Italian for him to make recommendations for our short visit (stay away from the port, check out via Garibaldi).  He whisked us by the un-recommended port, and I was excited not only by the fact that I could easily understand him but also by how much of my Italian was coming back to me. Almost three decades had passed before I learned to speak it while living in Tuscany and teaching English.  It had been almost fifteen years since my last visit.  So much had changed in that time. 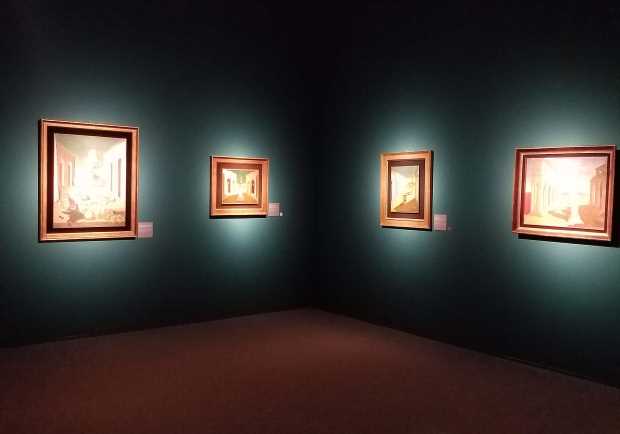 As we were checking into our hotel, we noticed a flyer on the desk for an exhibition of Giorgio de Chirico’s work at the Palazzo Ducale.  It was settled.  We would wash our faces and drop our bags in our room, not even looking at the bed to fight off the urge to nap.  We headed out into the street toward the Ducale and the exhibition, Giorgio de Chirico, Il volto della metafisica. 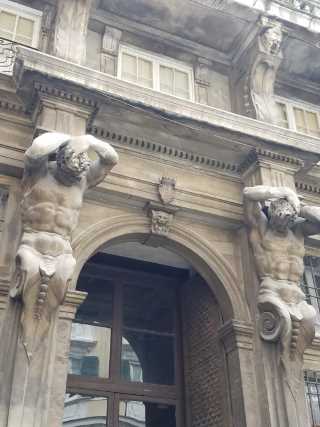 As we head in the direction of the show, Genoa’s architecture stops us in our tracks again and again.  There is no escaping the fact that we are in one of the old Maritime Republics, capitalism’s great-grandparents.  Colossal mermen buttress the portico of a courtyard shaded by various palm fronds.  Tritons and Neptunes glower at us from fountains and facades.  There is no doubt about our proximity to the sea and its ancient markets.  After a few minutes of feeling pleasantly lost, we realize we are in front of the Palazzo Ducale.

de Chirico was one of the most enigmatic modernists, by his own choice.  One of his self-portraits is captioned with the demand, “What shall I love if not the enigma?”  Essentially the sole member of the so-called “metaphysical” school of painting, de Chirico spent his childhood in Greece, where his Italian father designed railroads. That “metaphysical” designation was an art critic’s shorthand for de Chirico’s haunting cityscapes of deserted piazzas and renaissance arcades, behind which the tiny silhouette of a train frequently slinks along the horizon.  His greatest works, which he produced in the nineteen-teens, are highly exaggerated in perspective.  The Mediterranean sunlight casts impossibly long shadows that seem to push back the horizon.  He had a knack for infusing ordinary objects with a disconcertingly animistic, almost menacing, intensity.  A piece of fruit, a glove, a dress form, or a public statue might loom before the viewer with the sense of some mysterious force barely contained within it.

The Surrealists loved him and sometimes suggested names for de Chirico’s early canvases, which usually bore such poetically-charged titles as “Mystery and Melancholy of a Street,” “The Double Dream of Spring,” or “The Anguish of Departure.”  One of my favorite literary portraits is de Chirico’s of the poet Guillaume Apollinaire.  The foreground is dominated by an image of a classical plaster bust wearing sunglasses.  Apollinaire, relegated to the background, is rendered in three-quarter profile and total silhouette, a hulking phantom in his own portrait.  For some reason, de Chirico also painted a faint, thin circle around Apollinaire’s temple.  After Apollinaire returned home from World War I with an ultimately fatal head wound in that vicinity, de Chirico claimed to have foreseen it.

We know from his writings that, in the nineteen-teens, de Chirico was prone to visual and auditory hallucinations and premonitions.  He also complained of headaches, gastrointestinal pains, and blackouts.  Recently, Theodor Landis and Olaf Blanke, European neurologists, have speculated that the painter suffered from a form of epilepsy.  Whatever their cause, de Chirico’s health issues are believed to have influenced his developing metaphysical style, which many art historians think was exhausted by 1918, the year he turned thirty; this despite the fact that de Chirico would continue painting for almost another sixty years.

If you have seen only one de Chirico painting in a museum, odds are that it was painted outside the ten-year window of his so-called great metaphysical period.  The great metaphysical paintings are not easily found, and when you do find them, it’s only in major collections around the world.  They are relatively few, despite de Chirico’s attempts to complicate that limited supply later in his career.

In 1919, de Chirico published an article called “The Return of Craftsmanship” in an art journal politically oriented toward a return to the “classical” values of Italian renaissance masters.  The metaphysical period was over; de Chirico would now take his cues from Botticelli and Raphael.  The consensus is that his turn toward classicism produced few, if any, results to rival the paintings of the 1910’s.

“Il volto alla metafisica” offers a fair sampling of the “classicist” de Chirico, but it represents no more than half the show.  Which is fine by me.  I’ve never been persuaded by de Chirico’s paintings in this style, and perhaps because I’ve been awake for twenty-eight hours, in the Ducale they seem as eccentric and ineffectual as ever.  His later treatment of mythological subjects almost always feels to me heavy-handed and redundant when compared to his metaphysical period’s motifs of the Cretan princess Ariadne.  de Chirico’s metaphysical paintings frequently incorporate a Roman-era sculpture of her within and without the shadows of a city square in such a way as to radiate a melancholically forceful, almost inevitable, presence wherever they enter the picture plane.  Her languishing figure somehow seems both overtly emotional and deeply philosophical.  By contrast, there is something overtly didactic, if not preachy, in his mythological and historical subjects painted after 1920.

My wife wonders aloud why none of de Chirico’s early paintings are in the show. Knowing my affinity for this early work, she hopes I am not disappointed that we crossed the city in search of the exhibition. 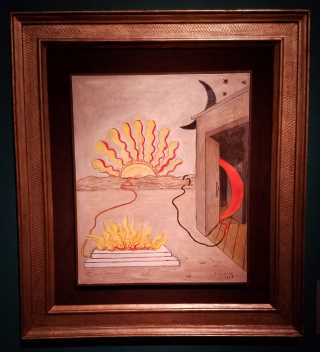 “Do you think the show’s title is misleading?” she asks.

“Good question.  But still, more than half the show is devoted to de Chirico’s metaphysical style.”

“But the metaphysical canvases hanging in the Ducale show were all painted in the mid-twentieth century, decades after the artist’s great metaphysical flowering.”

“I know.  It’s hard to understand why de Chirico, the classicist, began in mid-century to look over his shoulder, churning out mid-century copies of his great metaphysical works.”

“Were they more marketable than original paintings done in his new style?  Was de Chirico trying to prove a point to admirers-turned-detractors, such as the Surrealists, who saw in his “classical” aspirations a betrayal of their cause?”

“Did de Chirico’s youthful health problems regress so that he could only copy, but never again truly re-inhabit, that earlier ‘metaphysical’ state?”

Il volto della metafisica provides few answers to these questions.  That doesn’t mean the show holds no surprises.  Of the later work, some of the commissioned portraits stand out, if only because they are new to me.  Capturing a likeness was not one of de Chirico’s fortes.  Nevertheless, there is sometimes an interesting tension in the portraits between the proto-surrealist and classicist de Chirico; in the best of these, the inward pulsations of the surreal reanimate the rigid architectonics of the classical.  We comprehend that even the classicist de Chirico realizes that a sense of interiority is essential to bringing about a realistic manifestation of flesh and blood.

Perhaps the most pressing question raised by Il volto della metafisica is “What does this show, which has been held over almost two months, tell us about Italy’s course in the world today?” Was de Chirico ‘s turn toward classicism a rejection of the socialist politics of the Surrealists?  If so, what is the meaning of his subsequent returns to the metaphysical style?  In the oscillations of de Chirico’s style, it’s tempting to see a foreshadowing of the push and pull of right and left in Western capitalist democracy.

Like the current US regime, Italy’s is in favor of closing the ports.  The problem is outside, closing in.  There is an urgent call to return to the old values.  And this show causes one to ask, “What are the old values?”

As we head out into the late afternoon sunlight of Piazza de Ferrari, it seems to me that the enigma of de Chirico is a perfect portal through which to return to Italy.  We have old friends and new destinations waiting for us.  To our pleasure, we find that portal this summer in the ancient port city of Genoa, whose palaces are adorned with the gods of the sea and whose streets smell today like jasmine and coffee.

The Enigma of de Chirico, the Perfect Portal to Italy

Manufactured Outrage; Is It a Case of ‘Povero Fredo’ or ‘Poor Chris’?