Dionisio Cimarelli with a student

Dionisio Cimarelli, Sculptor/Professor, was honored by the Art Students League of New York this past week, when it placed a large image of one of his sculptures at its main entrance, joining a display of other renowned Artist/Faculty members.
The Art Students League is a legendary 140 year old art institution on West 57 Street, that is famous for attracting many of the world’s most celebrated artists to teach and guide emerging and amateur aspirants in the field.  It is located on West 57th Street, a known arts district that is  diagonally across from Carnegie Hall, with Lincoln Center, a short distance away. 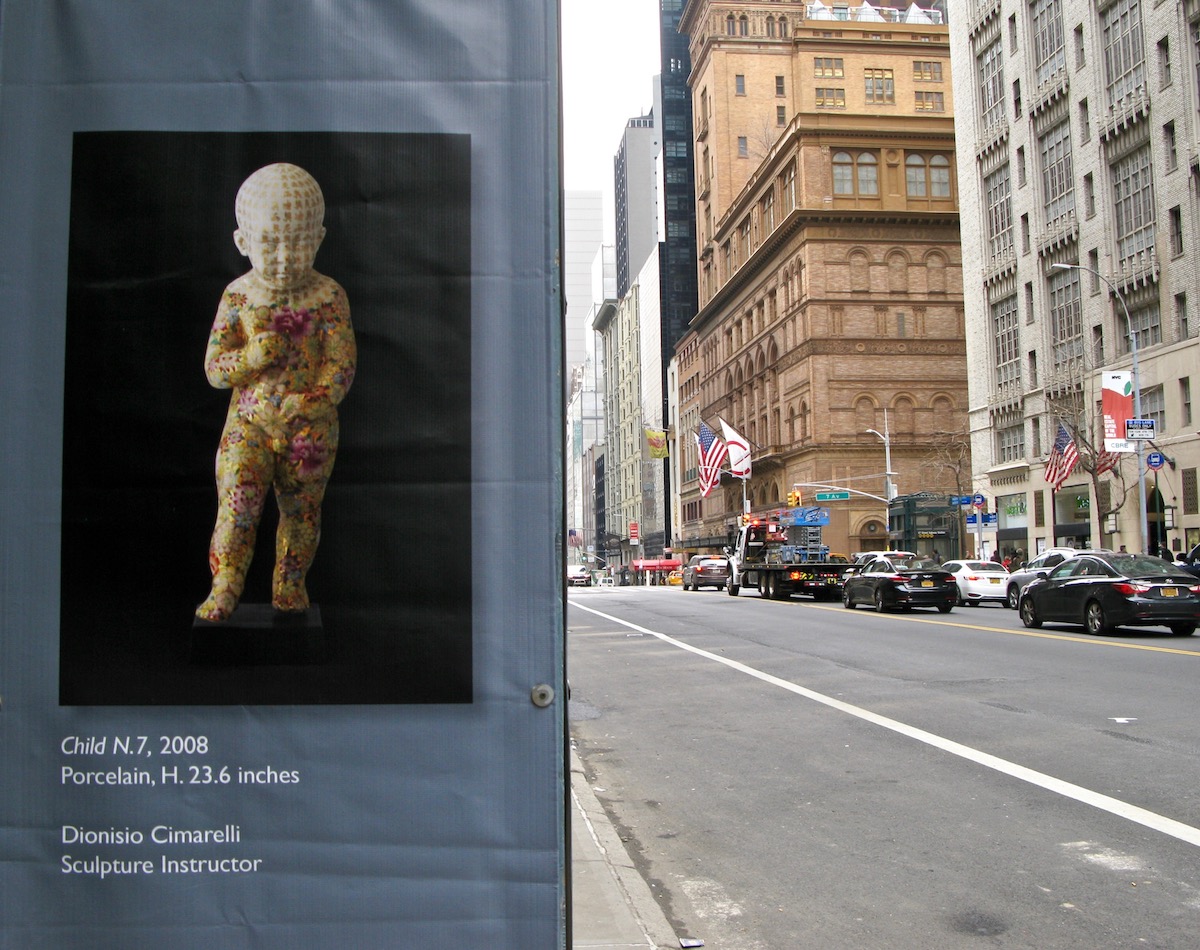 Dionisio Cimarelli boasts wide international experience and is one of the most well-known Italian sculptors who exercised, for about nine years, his artistic activity in China. Born in Jesi at Ancona Province in Italy, he holds a Diploma in Sculpture from the Academy of Fine Arts of Carrara. He also studied at the Repin Institute of Arts (St. Petersburg, Russia) and at the Academy of Fine Arts (Prague, Czech Republic). He participated in restoration projects at the Louvre Museum (Paris), the Royal Church (Copenhagen), the Royal Palace in (Stockholm), and at Strasbourg Cathedral (Strasbourg). He has received important scholarships from such organizations as the National Sculpture Society and the New York Art Academy (both in New York City). He has been invited as guest professor at the Wimbledon School of Art (London) and at King Saud University (Riyadh, Saudi Arabia). He has also participated in several conferences at prestigious academic international institutions. He held a solo exhibition at Berlin Philharmonic (Berlin) at the invitation of world renowned Maestro Claudio Abbado.

While in China, Mr. Cimarelli exhibited in the International Art Biennale (Beijing), the International Sculpture Biennial (Shanghai), and at MOCA Museum (Shanghai). From 2007 to 2012, he was the art supervisor of the important architecture project ZhongKai SheShan Luxury Villas of Shanghai. From 2010 to 2012, he was a member of the editing committee of China Sculpture Magazine. For the Shanghai World EXPO 2010, he was commissioned to create the sculpture of Matteo Ricci for the Italy Pavilion. This sculpture is currently in the collection of the Regione Marche Government (Ancona, Italy). In 2011, he participated in the Venice Biennale. In 2013, he moved to Monterey, California for a year to act as creative director of a large sculpture studio.

In 2014, the U.S. granted him permanent residence via the EB-1 Extraordinary Ability. Currently he is also teaching sculpture at the New York Academy of Art, as part of their MFA curriculum.

Montanelli, with his “Rented Child Bride”, Does not Deserve a Statue in his Honor