Heavenly Bodies at the Met: Desecration, Provocation, or Nostalgia? 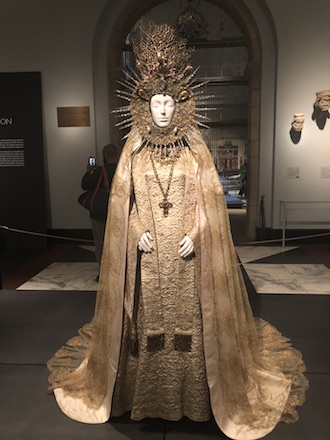 Matteo – who was three years old at the time – was blond with blue eyes, like one of Murillo’s angels. Each spring, his nanny would take him to see weddings on Saturday mornings. The nanny did this for three reasons: so that Matteo would get some fresh air; so that she – having just planned her own wedding – could catch a glimpse of what the other brides were wearing for inspiration and, most of all; because she was the fiancée of the church organist who served at all wedding ceremonies. Matteo liked this routine, which entailed a ride on a bicycle child carrier to the square and, upon arrival at the church, entry through a secret door and a steep climb to the little balcony on which the organ was situated, the former overlooking the church in all its splendor. The organist would let Matteo sit next to him on the bench, where he could admire the keys, pedals, and pipes from which that iconic sound so powerfully emerged, seeming to fill every angle of the large church. Exiting into the sunbathed square, Matteo would always manage to score a few sweets, perhaps because he resembled one of Murillo’s angels. The nanny would then lift him up onto the wall of the churchyard so that he could have a good view of the married couple, after which she and Matteo would inevitably comment: “what a beautiful bride!”

One beautiful, balmy June evening, Matteo’s mother decided to take him to the Corpus Christi procession—she thought he would enjoy seeing the canopy; the white-clad children making their First Communion; the torches that lit up the darkness of the night, the embellished streets and, most of all; the band clad in flame-red uniforms and accompanied by their shiny brass and bass drum, the latter so big he could probably fit inside it upright. Matteo was in his mother’s arms to allow him a better view; they were standing at the church doors and, during the one silent pause between the final note of the organ and the first note of the band commencing the Caudana’s “Lauda Sion,” the Archpriest stepped outside, slowly and solemnly, with the Blessed Sacrament, preceded by the torch and incense. He was wearing a gold damask cope with a humeral veil, his face hidden by the monstrance. Matteo looked at him attentively and broke the devout silence , declaring out loud, “what a beautiful bride!”

Upon seeing the “Heavenly Bodies: Fashion and the Catholic Imagination” exhibition here at the Metropolitan in New York, I could not help but recall my little cousin and the remark he made all those years ago. Inaugurated at a $33,000-a-plate gala attended by rich and famous people competing to be the best dressed in theme – including Rihanna, dressed in a religious garb complete with a miter; and Zendaya, clad in armor like Saint Joan of Arc – Heavenly Bodies is slated to be the most visited exhibition of the year. Following roughly a dozen visits by curator Andrew Bolton and years of negotiations, the Vatican granted some artifacts on loan from the Sistine Chapel’s sacristy that had then never left its walls: from the copes with trains embroidered in gold to the pectoral crosses, and the red calfskin papal slippers (by Italian cobbler Apolloni, not Prada) to Pope Pius IV’s tiara adorned with 19,000 precious stones (mostly diamonds).

The papal vestments are on display in the basement rooms of the Costume Institute of the Metropolitan and are therefore kept at an appropriate distance from the creations of the contemporary designers that they inspired. The creations are arranged in a breathtaking set-up in the Byzantine and Medieval art section of the museum. From the bridal gowns copied by the pontifical vestments of Galliano and Dior (Matteo was right…), to the garment for the statue of the Madonna in the chapel of the Virgen del Rocío in Paris – designed by Yves Saint Laurent – all of the costumes demonstrate a clear lineage between the vestments and the cult objects on display downstairs.

This exhibition could be interpreted as a form of desecration, provocation, or appropriation, but I believe a more valid interpretation is that of nostalgia. The designers in the exhibit are 80% Catholic – even if many are no longer practicing – and they have been active during this moment in which the Church is carrying out its great liturgical reform to simplify rituals and render the vestments more simple and austere. It is as if the precious beauty and the austere splendor of the Roman liturgy and its vestments, having lost their place in the ancient basilicas, have instead found hospitality in the ateliers of Milan, Paris, and New York.