Since 2004, the partnership between the Festival and the project of the poet and playwright Dave Johnson

As a co-founder and Associate Director of InScena! I am deeply proud of one of the most interesting and appreciated aspects of the Festival: the partnership with the NeON; and thanks to the events in the probation centers we are able to give back to theater and poetry in respect to their essential role within the community and human interaction and exchange. But I am writing this article from a personal point of view, because, in addition to its professional role, the heart of the whole matter is the impact on people. People, before artist, are deeply marked by these rare sharing moments.

The first time I entered the NeON in the Bronx center was some day in May. I didn’t really know what a Probation Center was, I didn’t really know what to expect, let alone what to do. So, I hid behind the lens of my camera and I observed. In the room, there were many tables and people from different ethnicity who spoke different languages sitting one next to the other in front of  hand-written pages. The InScena! Artists translated poems written by New Yorkers in probation and their relatives. Our friend and long-term collaborator, Dave Johnson, was in charge of the Free Verse project, that was created to transform those long waiting hours into a creative time, through poetry. The second edition of the Free Verse Festival met InScena! and those poems were then translated into Italian, to be recited in two languages, by the author and by the translator. First, to break the ice, our artists presented a few minutes of their show, then the bilingual performance gives us all the sense of those poems: dense, strong emotions that come from difficult lives and consciousness acquired through pain. Beautiful and powerful poems, beyond any expectation. 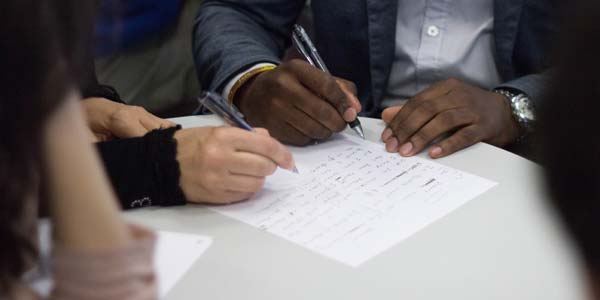 At the end of that fist day in the Bronx, I didn’t take many photos, I let the incredible atmosphere carry me away: an atmosphere that sprung out of the meeting of foreigners, who suddenly found themselves sharing words, finding out many common feelings. On the other hand, in the following events I did not only take photos, but also translated some. I never took the mic, I am not there yet.

On stage, the Italian artists often do not only read the translation, but try to go back to the meaning of the original work, so it often happens that a rap piece becomes a sort of ballad in Calabrese dialect or a piece in metric that manages to keep the same cadence in Italian as well. And you have fun, a lot of fun. So much that the great appreciation by the participants and the institutions multiplied the number of involved centers. Today, five years later, the date with Free Verse is extended to other districts of the city and it has become a fundamental event for the Festival. Expected by the locals and the InScena! artists, it is a true party, with food (Italian, obviously!) and cake. In time, gadgets were made and this year we will publish a book with the poems, photos and comments of the artists that took part in the project, to document what is really an unforgettable experience for all: Free Verse Meets InScena!