Drama or No-Drama? RezzaMastrella’s Art to Land at La MaMa

Antonio Rezza and Flavia Mastrella will shortly land in New York. The Italian art duo will perform their original play Pitecus at La MaMa Experimental Theatre Club in the East Village on October 13-16. Pitecus first premiered in 1995. The duo’s aesthetic view, language and work style are somehow unique within the Italian art community, in a way that goes against all pre-established theatrical, cinema and art syntax rules at 30 years since their premiere.

Before leaving for the US, Rezza and Mastella released the following interview in which they both discussed the different features of their work and life in detail. Their recount is self ironic, ruthless and irreverent exactly like their onstage performances.

If I were asked to talk about one of your plays, I would feel awkward. Your audience typically watches a show that is unusual, and which for this reason can be annoying, since it has no reference context or hints. I don’t think anyone has ever come up with something quite similar to your performances. Your theatre genre cannot be classified. Could you explain this concept to us?

M: “It is a type of ‘accidental’ art created by Antonio, who is a real performer who brings all about himself onstage, from content to his own personality. I provide a visual language framework for what he does. The encounter of these two disciplines – performing and visual art – produces our own style, based on a synthesis between language and visual communication.”

Antonio, you define yourself as “the greatest living performer, until proven otherwise”. You are asked  the following question often: what is the difference between actor and performer?

R: “It is easy, an actor makes use of a feeling which is not his/her own, and I don’t see why it should be that way. The actor is paid for what he/she does. A performer, on the other hand, has no feelings and acts like a device. In an ancient machinery type of theatre I am a device, I operate myself. I don’t have to focus on anyone’s state of mind; the characters which appear onstage do not have a state of mind. It is all about a device which you steer, lead, you only have to be a good driver, you are not a servant of a feeling.”

Do your characters have specific features or does your audience always see Antonio Rezza?

R: “I don’t think that the audience sees me because if I were more important than what we do, then it would be an ideological failure. I think that the spectators see what happens. What happens is absurd and the audience becomes fond of it. I am not Antonio Rezza whilst I perform, and my performance is almost like a type of schizophrenia. A division.”

M: “Performance is closer to the ritual than to the actual representation”.

Your performances do not come with a set but have a ‘habitat’ instead. Does the creation of habitats happen independently? How do you work on something which has no plot?

M:“I do not design sets, I am a visual artist, therefore I deal with staging, space, that is to say ’habitats’. I research form, language and concepts for two or three years, and the last part of the research is devoted to an habitat for Antonio.” 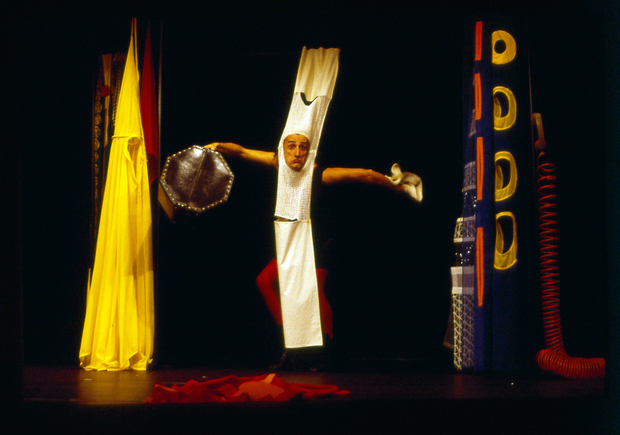 How do you communicate with each other when you are busy preparing a performance? Do you still surprise each other?

R: “Yes, of course, because we don’t work closely during the initial phases, but rather towards the end, to establish some kind of pattern. That is why I am amazed when my ‘habitat’ is ready and Flavia is, too, once she’s seen what I’ve come up with her habitat. If we were to work together since the very beginning of a project, we would not give each other this chance.”

What is the relationship with your audience?

R: “I could never do without the presence of an audience, our reciprocal love is a deep feeling because it is not expected. There is no bridge, no twofold device. If the spectators love what we do because we don’t question their love, then a strong passion unchains. It is a synergy, a different unity, very deep and tied to the whole ritual.”

M: “To the ritual as well as to the channels used to communicate. We must not forget that our work expresses itself in six, seven different ways, beside the language which is spoken onstage.”

Your shows are not really humorous, although the audience appears to have fun, do you think that’s because it won’t understand what it is watching?

M: “Our audience understands everything and understands as it wishes, it does not have to understand one specific detail. That’s what sets people free and makes them laugh. Our freedom of expression and Antonio’s physical and exasperated dramatic feature produce excitement and irony (Antonio’s body is extremely expressive). Our game  turns concepts upside down and exaggerates cliches.”

R: “And then we hope that they won’t understand us, one cannot expect to understand. Why understand what someone else does? I end up being more seduced by what I have not understood. Having fun is a tiring practice. When I say ‘having fun’ I don’t mean to underestimate or minimize efforts at all. Having fun comes with a sacrifice.”

How did you get the idea of bringing Pitecus to NYC? It is one of your oldest  shows, dating back to 1995.

R: “It looks ‘ancient’ even when compared to our previous shows of 1988. We chose Pitecus because the space is perfect and because we prefer to start with our first show.”

M: “And also because it is a ‘ready to wear’ show which fits inside a suitcase. It is huge but becomes tiny.”

R: “25% in English, perhaps even less, I’m not sure (he smiles). If you go onstage you need to get there without thinking about what you are going to say, like in Italian. This automatism /conscious intention suffers from an emotional problem; if you know a show by heart in English but end up having spectators watching it in English for the first time, emotions create an obstacle which affects one’s automatism and results in mistakes. I will learn four parts in English; however, the entire show will come with subtitles.”

Why do you both think that social theatre should be abolished and that only self-referential art has a meaning?

“The problem is also a technical one. If you talk about the Ardeatine massacre or about the Vajont Dam landslide you communicate with the use of a code, i.e. those who watch know what you are talking about. Without that awareness, that specific show would not be performed onstage. This is a technical feature – if you put up a show about Vajont and the audience knows nothing about it, then the show has no reception. Then you create engagement. Shows about the Holocaust cannot technically be made if the audience has never been aware of the Holocaust, that’s a fact – so you have an option: either copyrights are granted to the audience, or the ticket has to be sold half price. It is fair, isn’t it?”

What about your relationship with politics?

M: “I think I am leading an artistic protest. I have changed my political value, which I have introduced into arts, so I produce a dissent-art.”

R: “We surely are fighting artists, we are warriors.”

M: “We fight so that critique and creativity endure.”

R: “I don’t believe that politics has to do with higher thinking because it is severely affected by compromise, and therefore it is related to lower thinking. Any politician who comes and talks to us loses when dealing with our quick and incisiveness-driven thinking and creativity. Why don’t we organize round tables between the most important political representative and the quickest artists?” 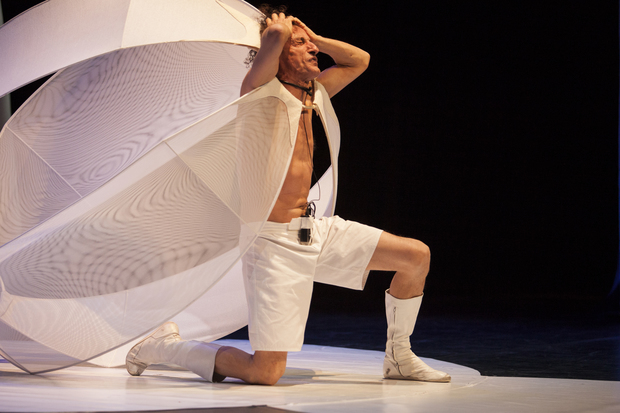 Do you regard yourselves as individualistic anarchists?

M: “We are anarchic, not so much individualists.”

R: “I hope I am. Before I die, I would not want to admit to myself that my being anarchist was due to my lack of interest, although it may be true. An illusion prevented by lack of interest.”

Can you name any artist who has been inspirational and whom you particularly like?

R: “I’d rather mention living artists, they can’t contradict us. Zappa for music, Artaud for theatre, Kubrick for cinema , Cruijff for soccer and Bacon for painting.”

M: “Werner Herzog and Rainer Werner Fassbinder for cinema, although I am inspired by the work of Fluxus and of the Lettriste artists.”

One last thing: I have read that you want to be filmed – with the support of Flavia – while holding your son.

R: “Yes, ever since he was born, I’ve been holding him every three months to film short videos. He will carry me around when I’m old, then he will drag me along and when I die, the film will be over. The day I die I want him to hold me when I am dead.”

R: “So I will be the first, let’s say actor, who has had the chance to plan to be acting as dead in a movie.”

R: “Imagine if my father had recorded me growing up, since my birth; I’d have observed the change every three months. It is not a sad thought, but a rather nice one.”